A Golden Spotlight On Cal Football vs Utah

After the Big Game, Cal fans everywhere said to themselves, "Well, at least it can't get any worse." CHALLENGE ACCEPTED!

Share All sharing options for: A Golden Spotlight On Cal Football vs Utah

I've seen pictures of train wrecks. And tire fires. And the Titanic. But a train crashing into the Titanic while it sinks with a tire fire on deck while Justin Bieber performs a duet with Celine Dion? Don't worry, Cal fans. We're not quite there. Yet. Jeff Tedford has really been flying around out there and being physical while coaching this team. No doubt. But he still hasn't been able to de-throne the legendary Tom Holmoe. He might not even break into the hallowed company of Theder, Kapp, and Gilbertson. Then again, the season isn't over...or at the very least, there are still games to be played.

This week, I thought that I'd just break down a punting play. Punting is winning, after all. Especially after a 3rd and long draw play. But despite some solid work from our kickers, the special teams simply don't deserve any further attention.

Cal comes out with 11 personnel, 1 back and 1 tight end. Initially, we go empty with both Rodgers and Bigelow lined up as receivers. Utah counters with their base 4-3 with one OLB near the line of scrimmage either threatening blitz or matching up in coverage on Bigelow. 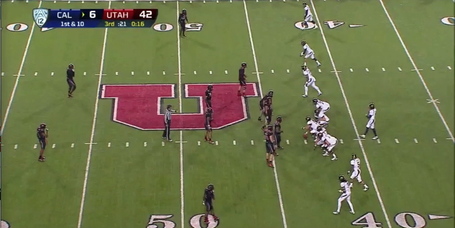 Prior to the snap, Bigelow goes in motion and re-sets himself in the backfield. Cal has done this in the past with other dual-threat running/receiving backs such as Marshawn Lynch, Jahvid Best, and Shane Vereen. However, because it is such a complicated and intricate maneuver, it took an entire year plus nine games to get Bigelow ready. 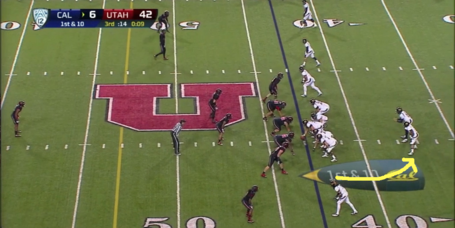 At the snap, Schwenke slants left and blocks down on their right defensive end. Adcock matches up with their right tackle while MSG moves towards their left tackle. Jordan Rigsbee pulls to the right. Tyler Rigsbee gets ready to watch their OLB move past him. It may look like Maynard is locking in on KA (at the top of the screen), but he's actually reading their left defensive end. 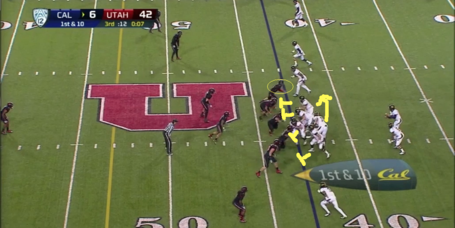 The left defensive end stays home. Stop me if you've seen this one before, but this response to the zone-read usually dictates a Cal run right up the middle. Instead, Bigelow takes it outside. And Tyler Rigsbee locks up their blitzing linebacker. Meanwhile, Jordan Rigsbee ignores their end and moves to target the left OLB at the second level. 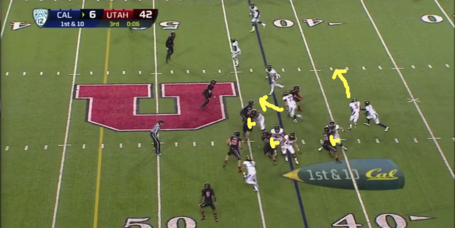 Because the game film shows a few million Cal zone-reads run right up the middle, the Utah MLB has already moved forward to fill the gap. I feel much better knowing that last week's game plan was, in fact, a clever strategy to set up the perfect play to be unleashed at the precisely the perfect moment...down 42-6 on the cusp of the 4th. The Cal Oline has actually opened up a nice hole right up the middle. That's because Adcock has completely driven their tackle out of the play. (Star Lotulelei is out for this play. This is his back-up...er, understudy.) 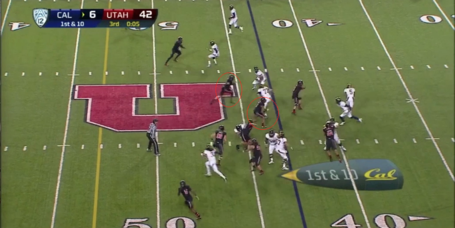 Although he's unblocked, their end has a Maynard-on-3rd-and-long's chance at denying the edge to Bigelow. Speaking of improbabilities, Jordan Rigsbee completely misses their OLB. Richard Rodgers is also there with crack back block, but only temporarily slows their linebacker. Meanwhile, Chris Harper squares off with their slot corner. 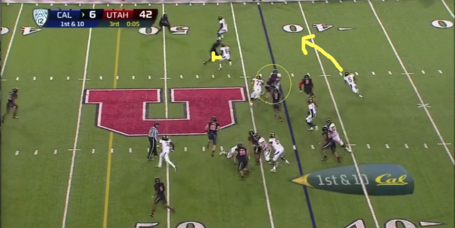 Jordan Rigsbee redeems himself a moment later by staying with the play and putting their OLB on the ground before he's able to grab Bigelow. Harper gets pushed back, but doesn't let their corner get free. 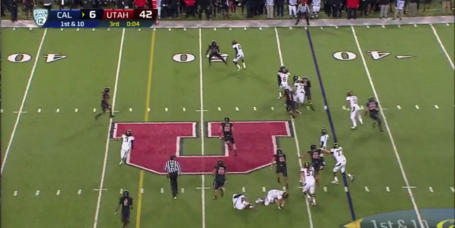 The Utah MLB(#7) shows good range in moving back to tackle Bigelow... 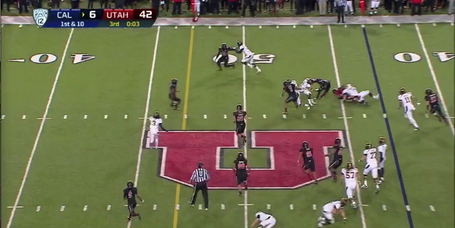 ...but Bigelow breaks the tackle. KA has gone Beast-Mode on their corner and driven him several yards inside and away from the sidelines. 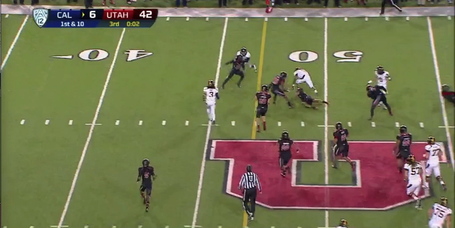 And, it's all the daylight that Bigelow needs. Also noteworthy is Maurice Harris (#3) hustling all the way from the far opposite sideline to take out the last Ute defender. Touchdown Bears! 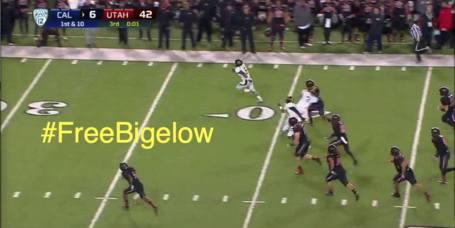 Well, at least re-watching this horror show has me in the appropriate mood for my least favorite holiday. Although we've essentially eliminated ourselves from bowl contention, we can still share our misery with others. And who better to cry bitter tears of disbelief than the flea-bitten mongrels from the Northwest? Go Bears! Beat the Huskies!