A Golden Spotlight on Cal Football vs. Stanfurd

Were there any glimmers of hope amidst the otherwise depressing morass?

Share All sharing options for: A Golden Spotlight on Cal Football vs. Stanfurd

Not exactly a fun one to review on film this week. But, let's not forget how hard the players are trying and how much they care.

Backed into the shadow of their own endzone, the Cal Bears go with 11 personnel, 1 TE and 1 TB. Furd matches up with their base 3-4 look and appears to be playing zone. 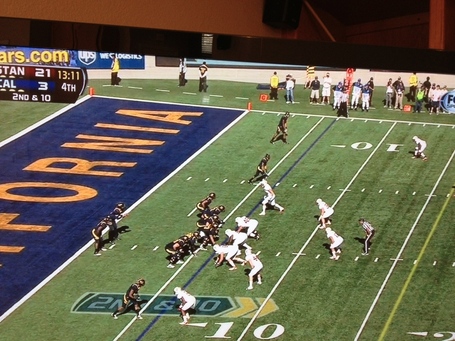 At the snap, Furd rushes their base 4 with a stunt looping a DT around to the strongside. Everyone and their cousin Vinny is amazed that Cal isn't running a delayed draw. In order to shore up the pass protection, Cal opts to keep both Rodgers and Anderson in to block. Notice how the Stanfurd linebackers are really keying on Cal's short passing game and are all dropping into shallow underneath zones to cover slants and crossing routes. 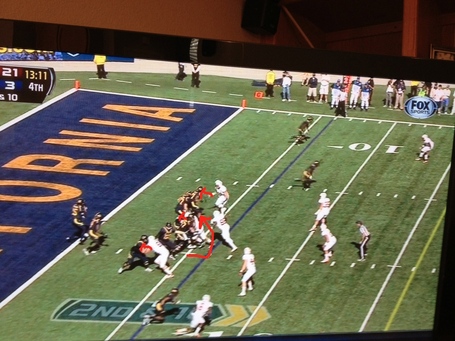 Although he should be the pork belly filling in a Rigsbee sandwich, the Furd DT is otherwise untouched as both Rigsbees are late to pick up the stunt. 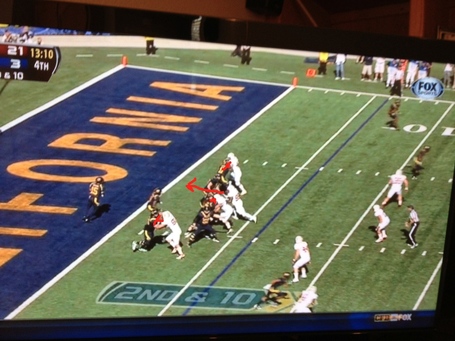 Fortunately, CJ Anderson is there to hold the rope. Despite playing through shoulder and back injuries as well as giving up 100+ pounds to a Furd blitzer, CJ gets his pads low and prevents a safety. 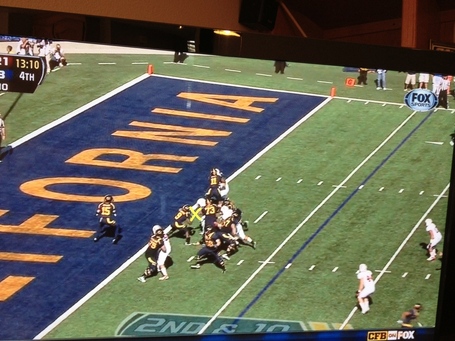 Thanks to CJ's block, Maynard gets the ball off before getting leveled. Chris Harper does his best Marvin Jones impression and lays out for the circus catch. Roll on you Bears! 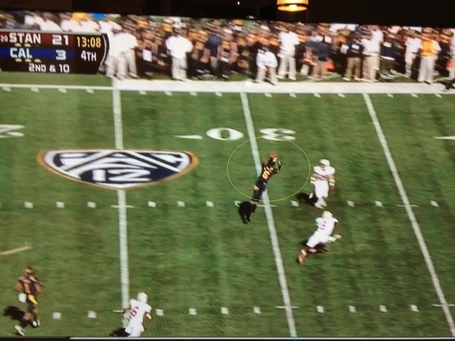 Furd is threatening to put the game away. They come out in 12 personnel, 1 TB, 2 TE with one TE in line and the other lined up as a WR. Cal counters with their 2-4-5 nickel package. Hill is in the slot, Lowe is deep center as a safety, and Sebastian is lined up w/ the LBs. 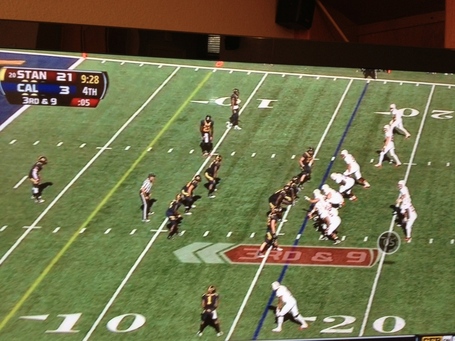 After unsuccessfully blitzing all day, Cal opts to play coverage on this down. They send their base four and drop everyone else into coverage. 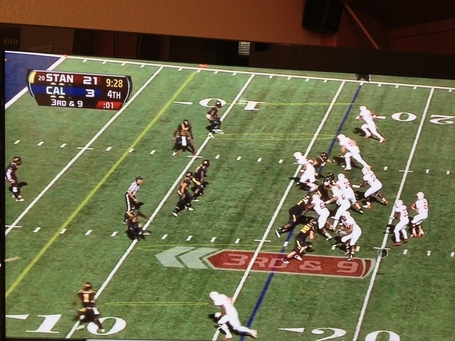 Campo's pass rush on the edge forces Nunes to step up. Payne is initially stymied, but refuses to abandon his pursuit. 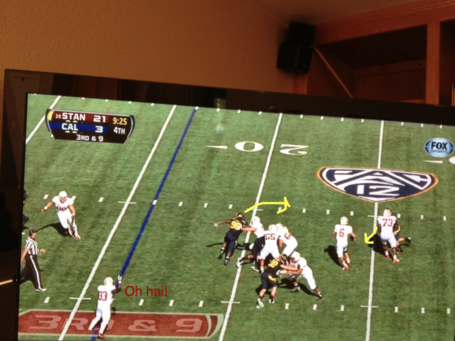 With Campo behind and Payne in front, Nunes pulls the trigger... 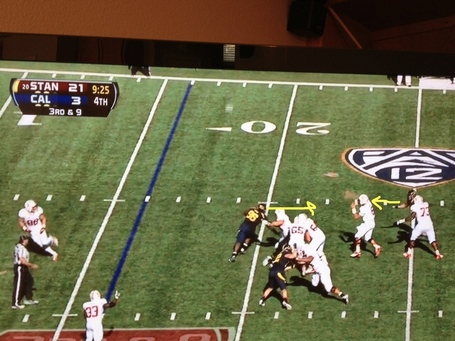 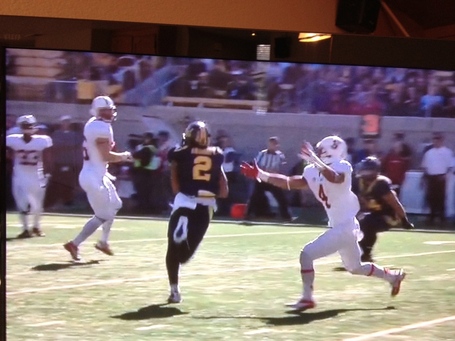 ...and undercuts the route for an INT. 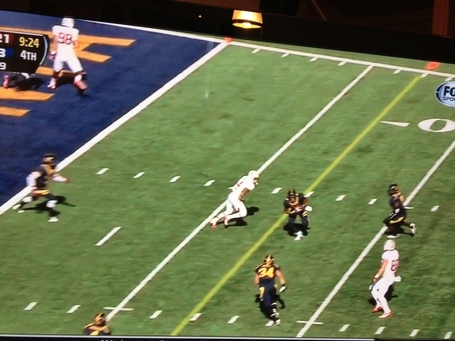 Cal is in 11 personnel, 1 TE with 1 TB, but goes empty. Furd looks to be in their standard zone look. 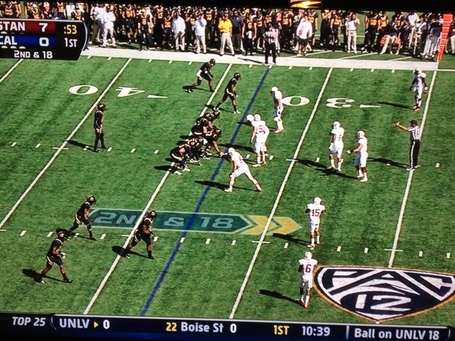 At the snap, Maynard immediately locks into KA. He's good at that. 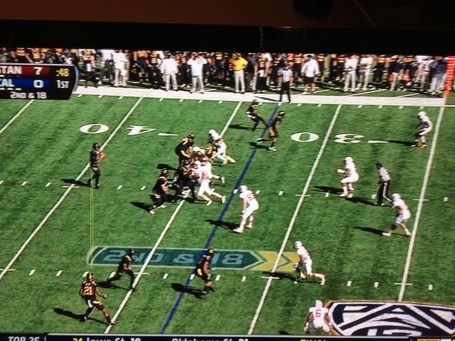 But it's a fake! Maynard looks off KA and comes back to Bigelow on the slip screen. 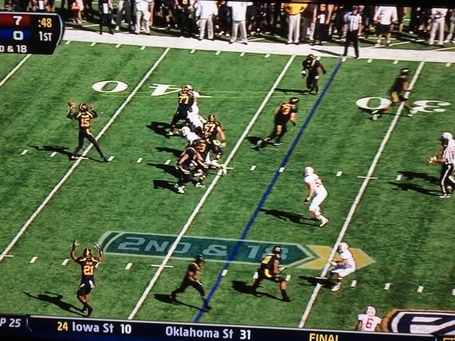 The pass is _right_ on the money. Bigelow lays out and corrals the ball. 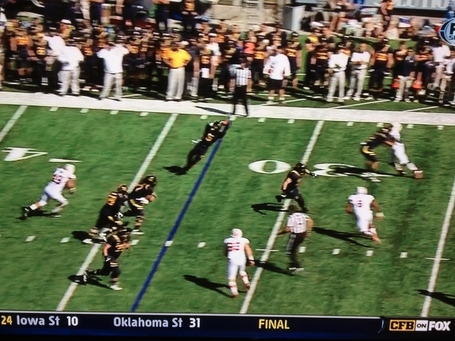 Treggs tries to lock up the CB. Jordan Rigsbee is out in front, but misses his block on the Furd LB. 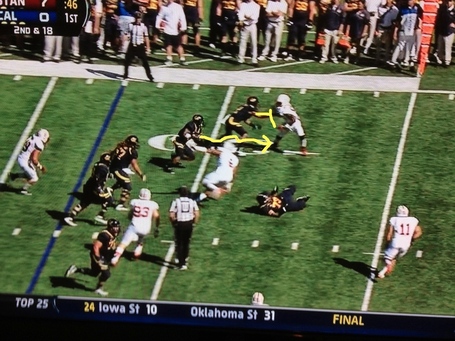 Bigelow gets hit by the Furd LB...but breaks the tackle!!! 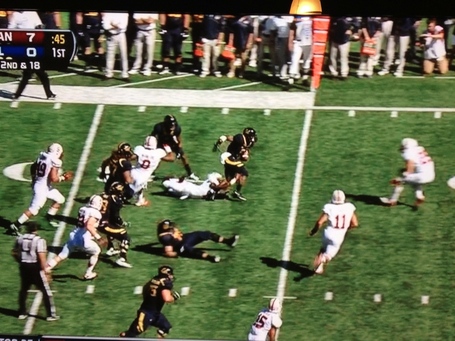 Now the Furd safety has Bigelow lined up. He gets his pads low... 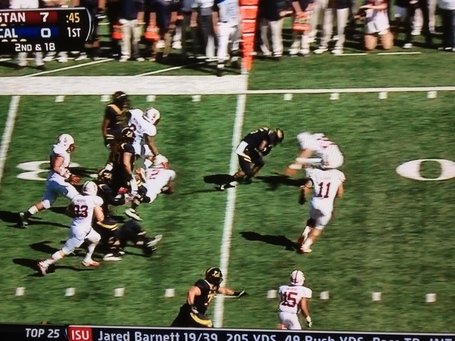 ...and runs over the Furd safety! Bigelow recovers his balance and heads outside. 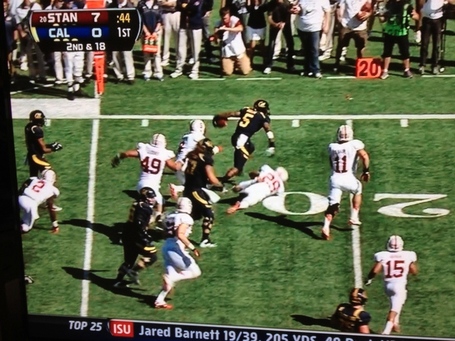 The other Furd safety lays out... 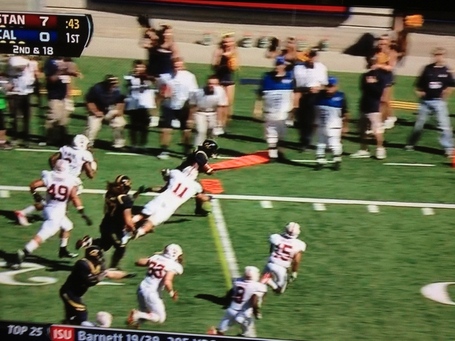 ...and Bigelow runs through the tackle. It forces him to stumble... 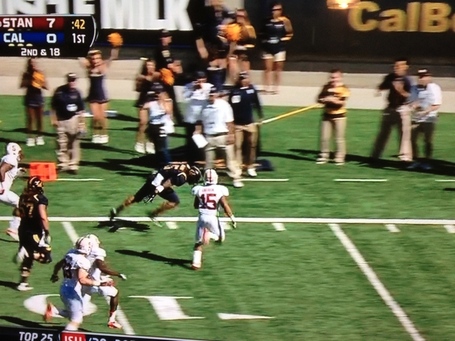 Which allows the last Furd to bring him down short of the goal line. So close and yet...

A more accurate throw with better downfield blocking and Bigelow takes this one to the house. 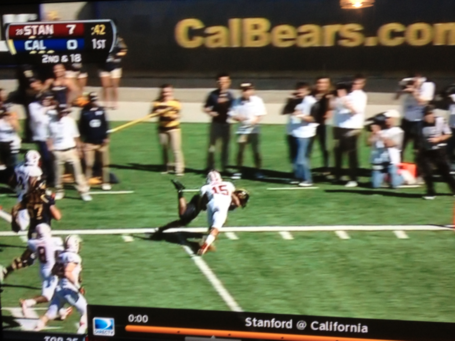 Not a lot of sunshine to pump here. The players care. Let's have their backs and hope for the best. Go Bears!