At least here we have some photo and video of the streaker!

Last time out, Cal ended the first half down 21-3 in the Big Game. If I had told you that Stanford would not score a single point in the second half, perhaps you would be happy. Sadly, Cal couldn't score any points either (we tied the 2nd half!) and so there was not a lot of excitement in the second half. At least not during the game itself. There was actually a decent amount of activity all throughout the game, including everybody's favorite Big Game highlight: the streaker!

First, we had the Stanford band show. Their show appeared to relate to Stanford having a father a la Star Wars. It was somewhat unclear to me exactly what was going on.

I've written about this before, but the Stanford band needs to radically overhaul their whole thought process if they want to accomplish their creative goals. They have a narrative and that narrative is totally destroyed by having to stop for three minutes to play a song. They sometimes try to weave the narrative into the songs by spelling things out on the field, but it usually doesn't really work.

I would have changed this to make it Stanford being Cal's father. I do not know if they've done something like that before, but why do a random Star Wars show that made no real sense when you can try to take digs at your opponent. It is the 30th anniversary of the Play, right? I was there in 2002 when they did a big thing about how Garner's knee was down. It was actually pretty funny.

Why not do something about how Cal is living on 4 seconds from 30 years ago etc etc etc. Even Cal fans were complaining about how much The Play-related stuff was going on (probably because we were losing and it seemed very "Ok, guys, we get it, we had the Play 30 years ago, can we win today???").

Instead they just seem satisfied with dressing wacky, having a poorly constructed narrative, and playing what can only loosely be described as music. I have much higher hopes for the Stanford band and it is all frustrating. 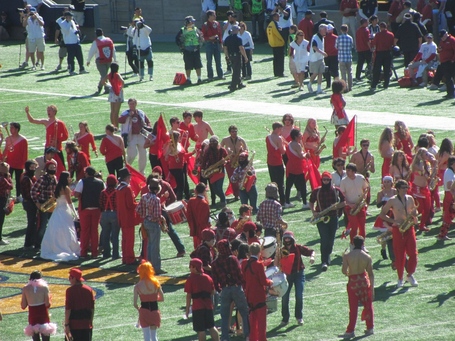 Love the woman in the wedding dress, though. Complete success there. 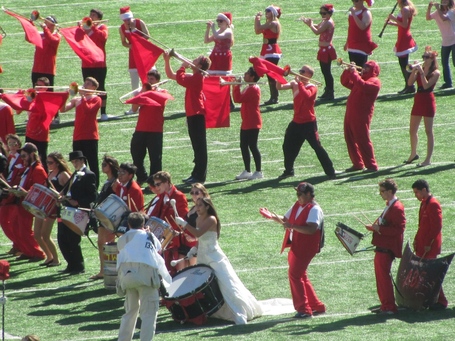 Thanks to valued reader CalBear81, you can experience the card stuns AND get a taste of the Stanford band show. Listen to the audio, it doesn't make a lick of sense.

And then the Cal band. They did the Glam Rock show from the 80s, including the song "Jump" (with the band jumping). 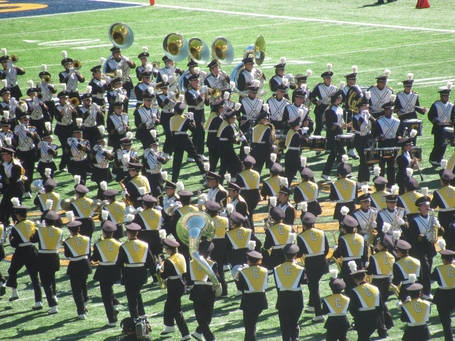 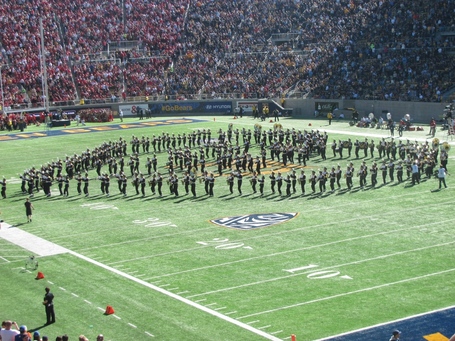 This is not what you think it is. It is a guitar. They even had the strings play. 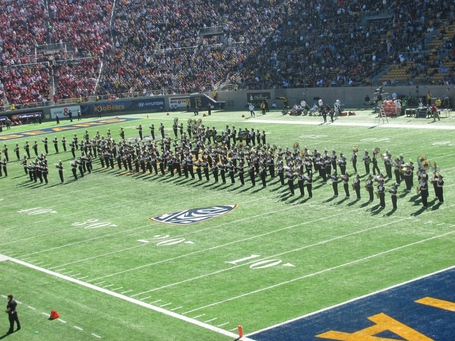 And here we go! Then, the streaker came out. He ran across the field, but then Zach Kline ran towards him. He kinda jumped backwards away from Kline. I was hoping he'd get tackled, but sadly, it was not to be. He was merely escorted off the field by what appeared to be laughing security guards. 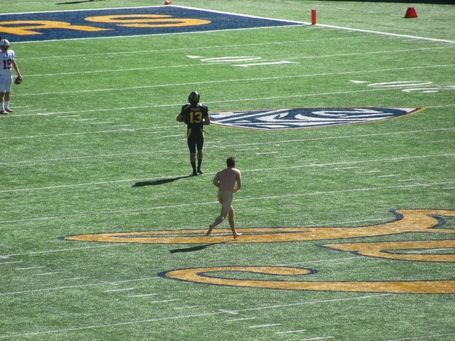 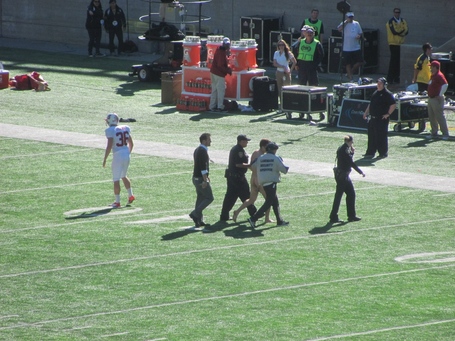 Also, Tony La Russa was there to give another cartoonishly oversized check out! Go 80s and 90s A's! 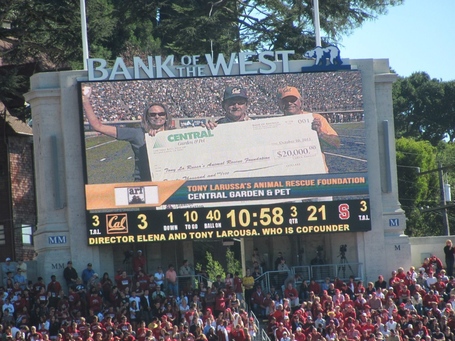 Another video regarding The Play. They had many, many of these. I know that Cal Athletics did a great job on the videos and I have no particular criticism of them in and of themselves. But when you are down 21-3 and nothing is doing, it seems like we are living in the past to have an unbroken stream of videos about the Play. 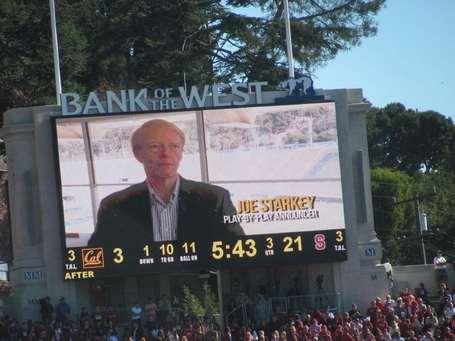 Here, you can get a sense of the atmosphere in the 2nd half. Even though Cal was not looking great out there, the fans were sticking with them. They were ready to explode over anything and everything.

At least the break off bands came around to play for people. 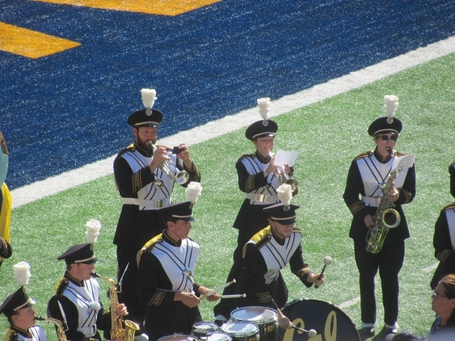 The clarinet section came up to play for us! 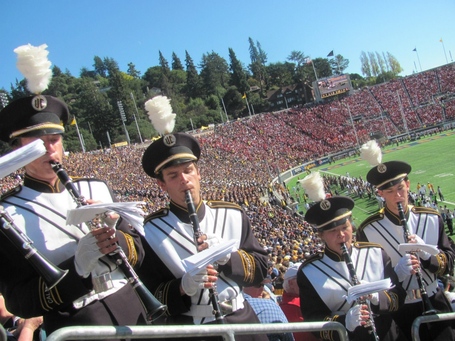 Here is Joe Kapp, the Coach for the 82 team! He was there with members of the 82 team in another Play spot. What was odd was that Joe Kapp sat like 20 feet away from me in fairly non-descript seats on the east side throughout most of the game. I'm reasonably certain he could be up in the suits if he wanted to. I wonder what his thought process was. 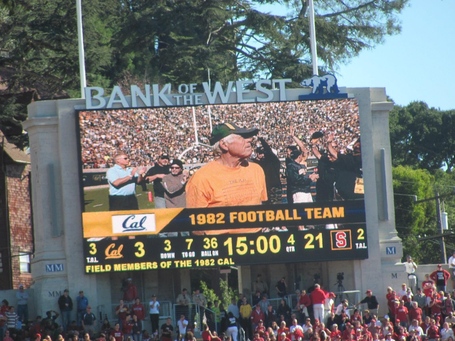 MicMan Aaron tries to hype up the crowd. They did a full stadium Give Me A C chant. Lots of energy, but sadly, did not lead to a Cal victory. 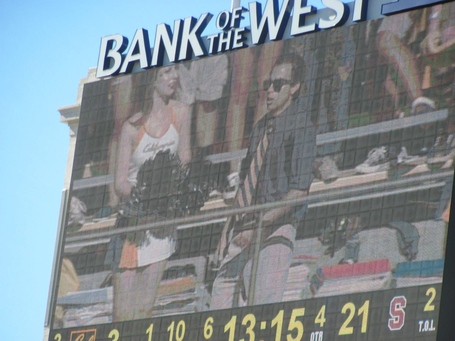 Remember, you can make any of the photos bigger by opening them in a new tab. Thanks! 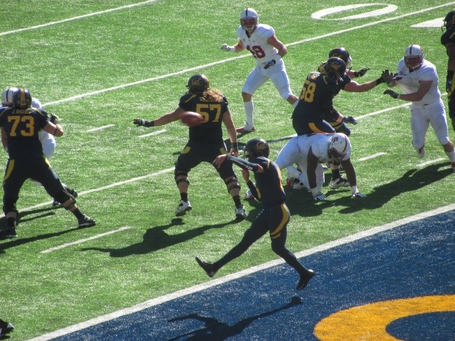 Student section still giving their all in the 4th quarter! 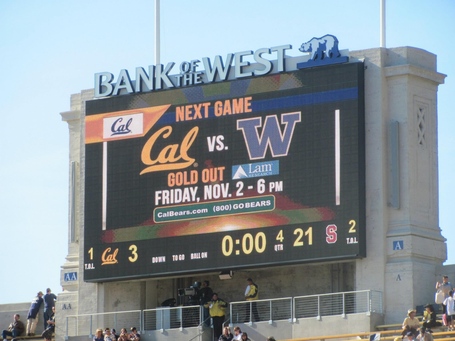 Walking down Bancroft, I was presented with what can only be assumed was some sort of guerilla art installation called the "2012 Cal season." It seems way too perfect to just be a trash can that somebody threw a magazine into. 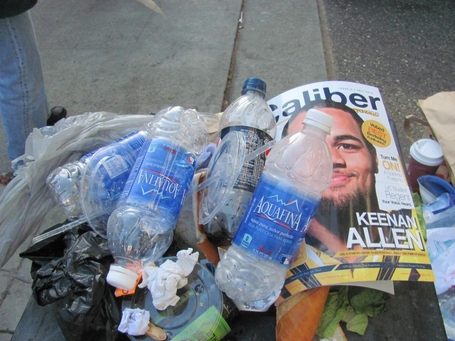