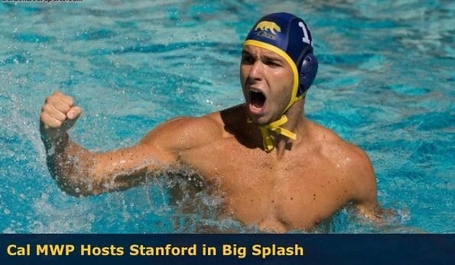 It's the battle in the pool between Cal and Furd at Spieker Aquatic Center this morning, just a few hours earlier and under a mile away from the Big Game. Rather than The Axe, the Steve Heaston Trophy (established in 1999 after the former Cal water polo coach) will be at stake between the two water polo programs with the most history (and National Championships - Cal with 13 over Furd's 10). 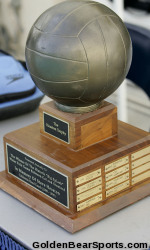 This year's Cal Water Polo has had its ups and downs so far, but the team has remain talented and a threat to win every match, despite dismissing 5 players midseason. Featuring 2012 Olympian Aleksa Saponjic, leading scorer Collin Smith (40 goals) and sophomore goalie Jon Sibley, the Golden Bears are still a force to be reckoned with and will look to retain the Steve Heaston Trophy. Bears and Furd has met earlier this year at the NorCal invitation where evil prevailed by a 9-8 margin. Bears are currently ranked 7th in the nation and could really use some quality wins, but probably need to win the MPSF tournament to make the 4 team tournament.

Bears has been on TV two other times this year, an ESPNU clinic over Princeton and an exciting but somewhat controversial sudden death loss to UCLA (UCLA won by converting on a penalty) on the Pac-12 Networks.

Furd, currently ranked No.5, are coming off a recent 9-7 win over No.2 UCSB. You can throw all the ranking stuff out the window, however since this is the rivalry game.