A Golden Spotlight on Cal Football vs. ASU

In #4 we trust? Taking a closer look at Avery Sebastian's debut as our starting safety.

Share All sharing options for: A Golden Spotlight on Cal Football vs. ASU

ASU lines up with 11 personnel, 3WR, 1 TE, and 1 TB. Cal counters with a 2-4-5 nickel package using only two down linemen. This lets us put more speed on the field to match up with their spread, but could leave us more vulnerable in the trenches. 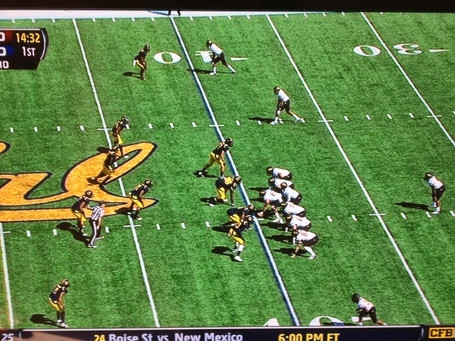 Pre-snap, both Sebastian and Forbes move towards the line of scrimmage and threaten to blitz. 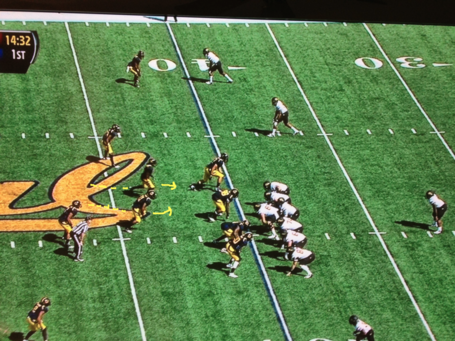 At the snap, Forbes attacks the A gap while Sebastian heads around the backside. ASU's Oline starts drive-blocking towards the strongside. Their center moves to the 2nd level while their TE blocks down on McCain and their LG pulls. 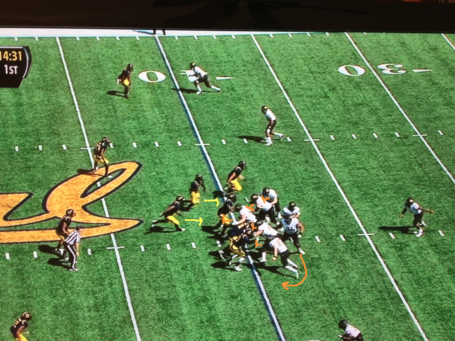 Because of the threat of play-action, Cal's remaining LB(Jefferson) has to stay at home. It's not looking good at the line of scrimmage. Payne is double-teamed. Forbes is getting taken down by their center. Coleman and McCain are both tied up. 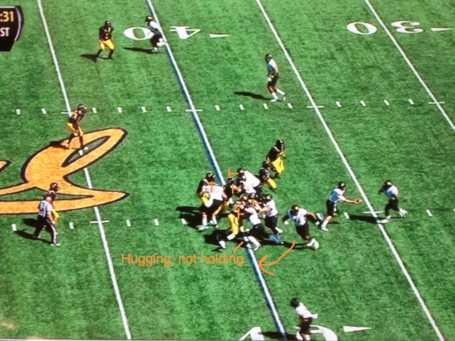 There's a wide-open expanse of undefended grass around the left end with ASU's guard pulling in front and their WR angling to crack down on Jefferson. It looks like the perfect play call against a blitzing nickel package. 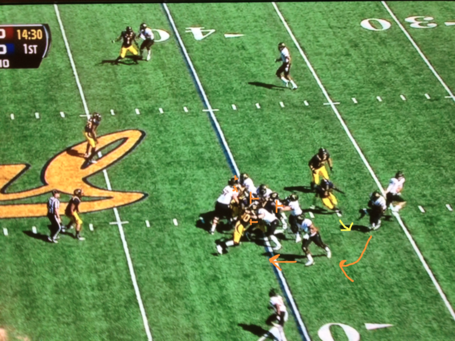 But Sebastian puts on a tremendous closing burst and cuts down the ASU tailback in the backfield for his first career TFL. McCain also fights off the hold block of their TE and helps finish the play. 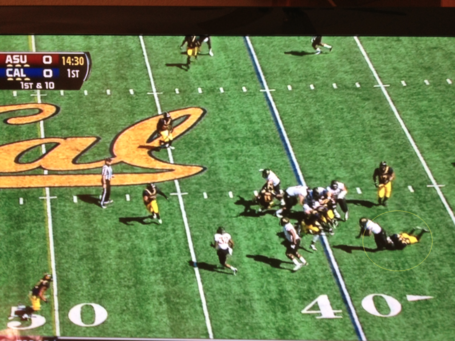 ASU goes with four WRs and a lone back. Cal responds with their 2-4-5 nickel set. This time, it's Jalil and Barr as the two DLs, presumably to provide more pass rush by using two DEs as our interior linemen. 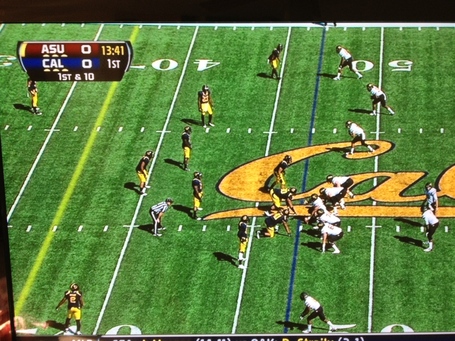 Pre-snap, both Sebastian and Forbes move towards the line of scrimmage threatening blitz. 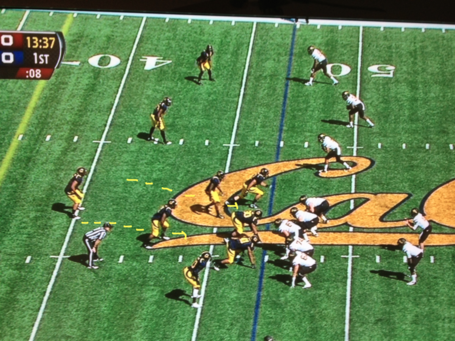 It's a zone blitz. While Sebastian and Forbes both attack the B gap, McCain backs off the line and drops into zone coverage. The ASU quarterback looks first to the side with 3 WRs, but sees that they are all covered. Jefferson does a nice job of staying with their slot receiver. That's a tough assignment for an LB. 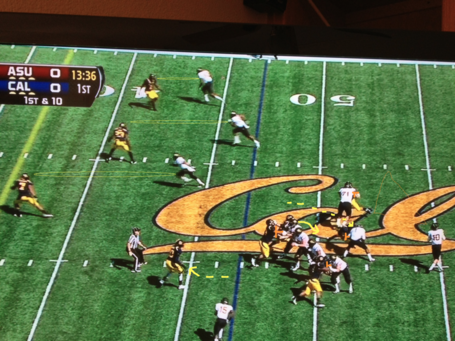 Sebastian gets blocked by the ASU tailback, but that allows Forbes to make a free run at the QB. Scarlett beats their tackle around the outside and also closes in. But, the ASU QB checks back down and finds his outlet receiver running a shallow crossing route. McCain gets picked by the referee and doesn't step up quickly enough. 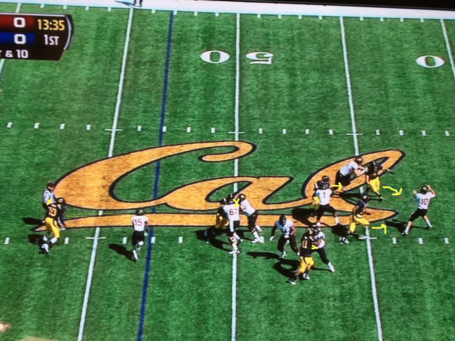 The pass is right on the money. Amazing. (Are quarterbacks allowed to do that?!?) McCain is in close pursuit. Meanwhile, Sebastian disengages himself from their tailback. But he's eight yards away and looks to be out of the play. 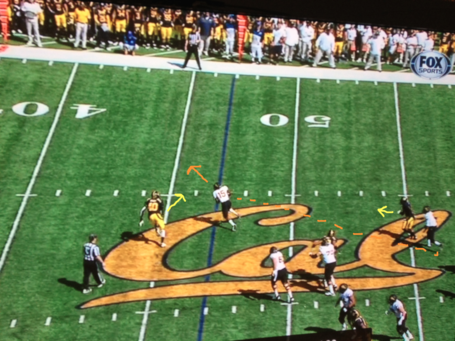 McCain tries to make the tackle, but misses. The ASU WR shrugs free and now has a open field in front of him... 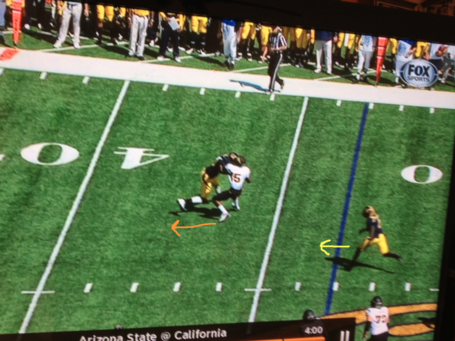 ...except that Sebastian never gave up. He sprints back ten yards and levels the ASU receiver. It's a short gain instead of a huge play. While it may be true that you can't coach size, you also can't measure heart. With so many of Coach Pendergast's schemes reliant on strong safety play, it's a relief to see #4 step up and do his part to hold the rope. If only he could play Oline... 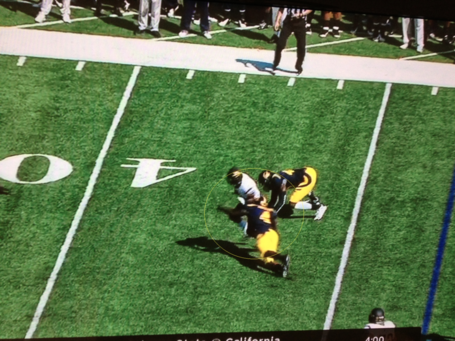 Sorry Cal fans. This one wasn't a lot of fun. Sometimes, that's just how the game crumbles. Not much to do now but try to bounce back against the song-stealers from the southern annex. Go Bears! 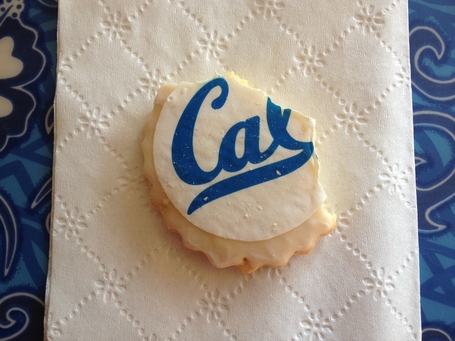