What is your favorite Big Game memory?

What moment of Cal glory or furd faceplant stands out to you?

Share All sharing options for: What is your favorite Big Game memory?

JahvidKnowsBest: Jahvid Best running all over Stanford in 2008. We absolutely dominated them.

NorCalNick: 2002 and 2009 were by far my favorite Big Games, but we've covered that ground before. Instead I want to recall my favorite underappreciated Big Game: 2005

You had Steve Levy. You had Stanford needing a win for a bowl because they lost to UC Davis. You had Cal fans enjoying the cartharsis of the win after losing 4 of 5. And you had T.C. Ostrander and Trent Edwards just getting CRUSHED. 9 sacks. I distinctly remember my arms getting tired from doing the Iron Man clap throughout the game. And you have what became a staple during the final years of old Stanford Stadium Big Games: Cal fans completely dominating Stanford fans both in numbers and noise. It was glorious, and a classic example of how a Big Game win can redeem an otherwise painful season.

TwistNHook: Well, 2009 ranks up there, but 2002 is what I gotta go with. Never seen Cal win against Stanford. Such a cathartic moment. And here are some videos of it:

And this appears to be the entire game: 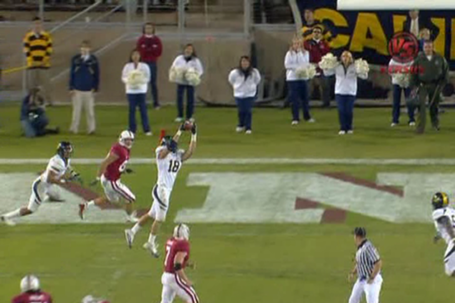 LeonPowe: 1993 Cal at Stanfurd. Cal 47 Stanfurd 17. First time beating the Furd in 6 seasons at that point. Dave Barr. Lindsay Chapman. We rushed their field. My friend handed Chancellor Tien a huge piece of Furd turf and he walked around yelling "GO BEARS!" with a giant piece of turf in his hand.