A Golden Spotlight on Cal Football vs. WSU

Is the Palouse still cursed, or are they still Cougin' it in the Northwest tundra?

Share All sharing options for: A Golden Spotlight on Cal Football vs. WSU

Props to the diehards who stayed awake for the entirety of this one. Nothing like a late snap and the Air Raid for an ever-so-enjoyable 4+ hour marathon. At some point, the Pirate may very well make this road trip a despised and feared circle on the schedule. This past weekend? Not so much.

Some interesting scheme work for both teams. In an unusual move, Wazzu has split backs to go with their 3 WR. Cal is in their 2-4-5 nickel. But, they've split Payne(96) and Moala(55) wide over the WSU guards and brought two LBs, Jefferson(7) and Forbes(11) on either side of the center. It's an interesting counter to the Air Raid's wide offensive splits. Basically, Cal is daring the Cougars to try to run up the middle. Also, by putting two LBs up on the line of scrimmage, the Cougar center and guards are at a big speed disadvantage. There's a lot of trust in the secondary here because there's no help. Also, this is a nod towards Cal's speed at LB; Coach Pendergast feels that they're fast enough to either blitz or drop back into coverage. 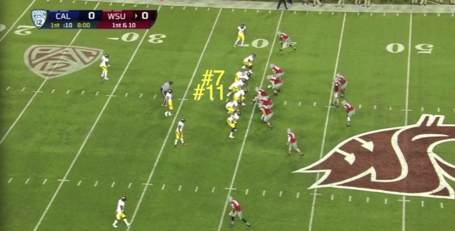 At the snap, Josh Hill follows their slot receiver in motion which suggests that Cal is playing straight man on the outside. All six of the Cal defenders initially surge forward as if they're pass rushing. 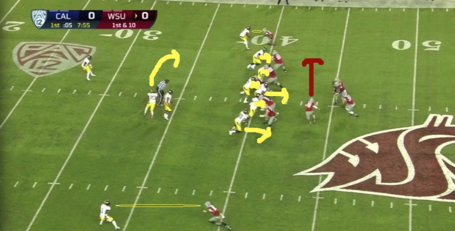 But then Jefferson backs off the line and drops into a shallow zone coverage to cover any crossing routes. Because the WSU center stays engaged with Jefferson, Forbes has a free run at the QB. The Cougars have two backs...but both release into patterns. 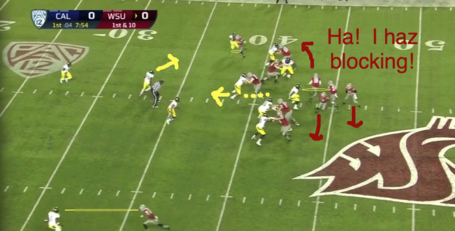 Now that the backfield has cleared, Forbes is left with a clear run at Halliday. 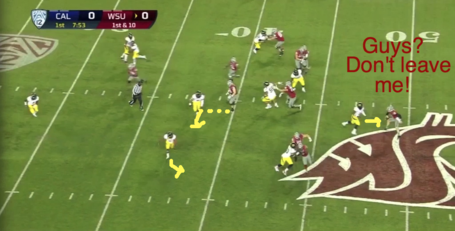 Halliday scrambles and can't decide whether to dump it to his back or try to hit his WR further downfield. 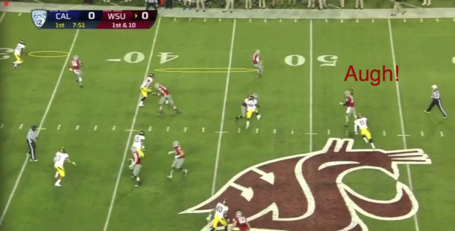 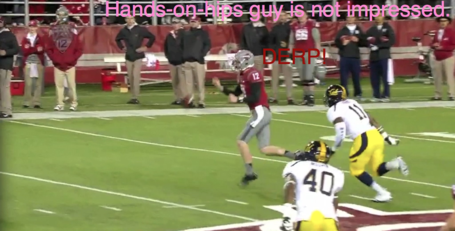 It's a FUUUUUMBLE. A Cougar lineman recovers, but it's a big loss. 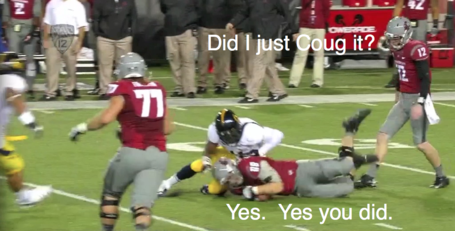 Now that it's 2nd and long, both teams adjust. The Cougs go back to their standard 4WR, single back formation. Cal is in their 2-4-5 nickel. But again, they have two linebackers lined up inside while their DTs are lined up as ends. 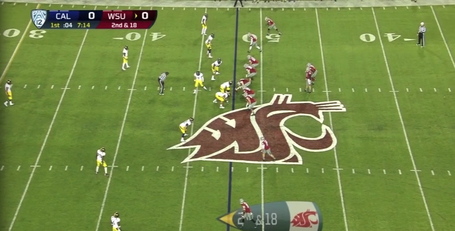 At the snap, it's a different zone blitz. After faking a blitz with both ILBs, one of Cal's LBs drops back into coverage while Sebastian rushes from his safety position. 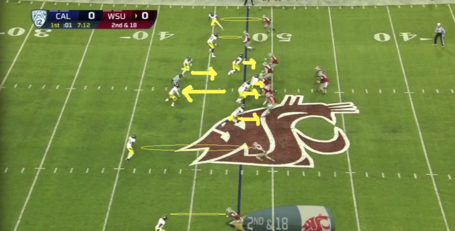 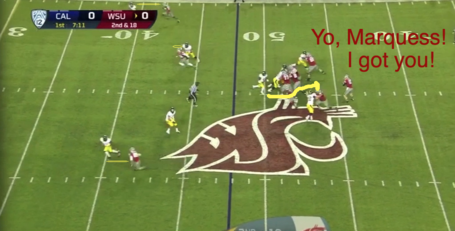 The staredown allows Michael Lowe to come off over the top support for the slot receiver and head towards the sidelines... 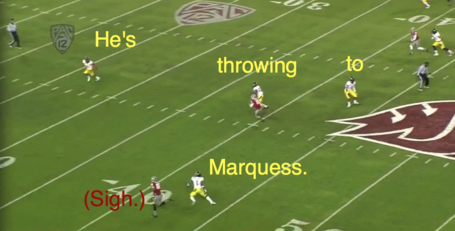 ...Where he easily picks off the overthrow. 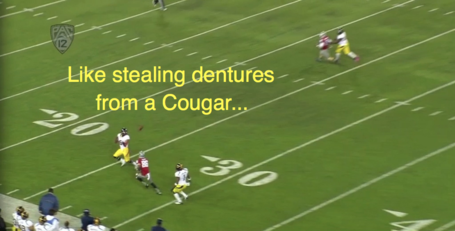 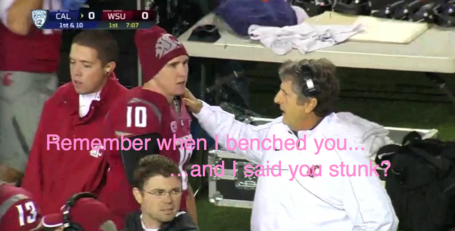 Tuel is quite excited at the prospect of getting pounded by Cal defenders who don't have to respect any semblance of a ground attack... 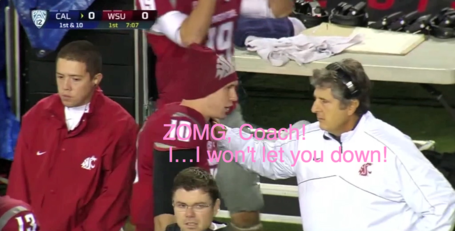 We cannot confirm nor deny whether any walk-ons' brains were consumed on the sidelines or at half. 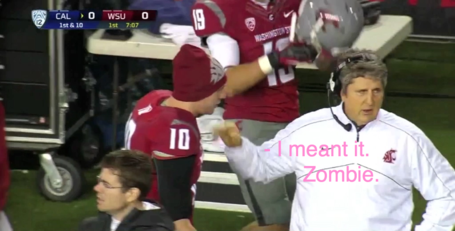 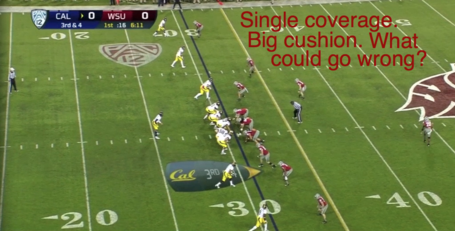 At the snap, Wazzu's LB who was covering the slot receiver (Rodgers) blitzes. The safety on that side steps up to pick up Rodgers. Unfortunately, that leaves no safety support in the middle of the field and the remaining safety retreats deep to keep everything in front of him. 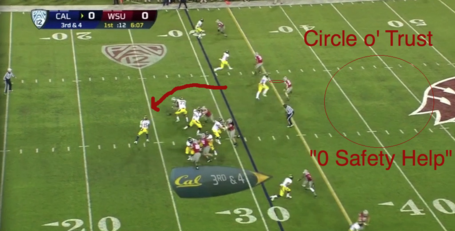 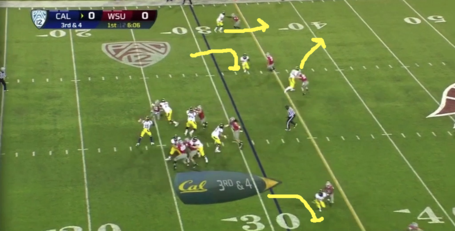 KA reaches behind him to snag the perfectly thrown ball... 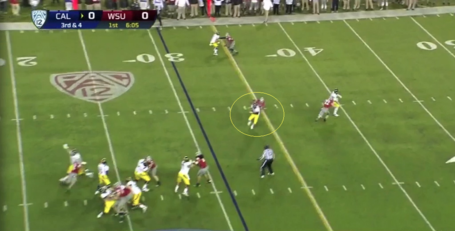 KA looks to be boxed in as the corner closes in and the safety comes sprinting up... 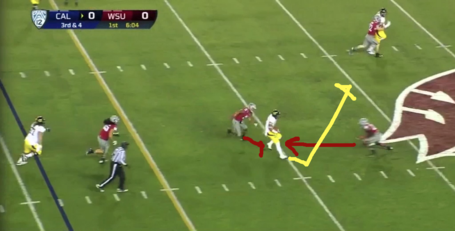 ...but he splits the double team and muscles through. 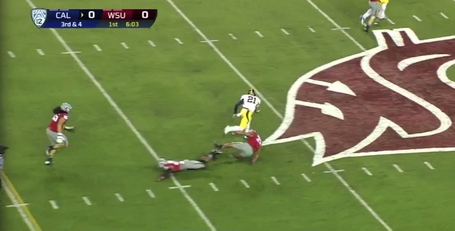 The remaining Wazzu safety has a chance...Ha ha. Just kidding. He gets faked so badly that NASA wanted sonic readings on his jock strap after the game. 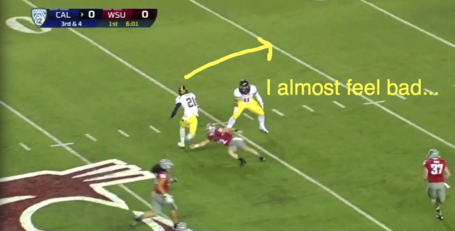 One final Wazzu defender makes chase. He's...well-insulated...and has no chance of running down KA. 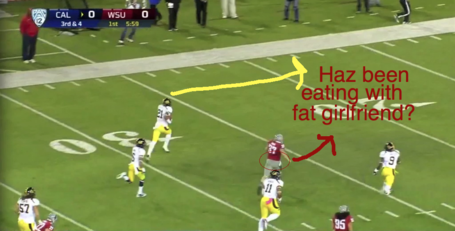 It's a Golden Bear caravan to the endzone. May we see this many, many times next week. 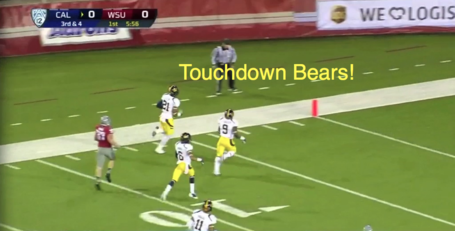 Let's not kid ourselves. UCLA was overrated and Wazzu is just plain bad. It's a different challenge this week. But let's go get that Axe. Go Bears! Beat the Cardinal!