This Week In The Pac-12: Touchdown Or No Touchdown?

Plus: Oregon State impresses again, UCLA holds on against Utah, and USC cruises in Seattle

Share All sharing options for: This Week In The Pac-12: Touchdown Or No Touchdown? 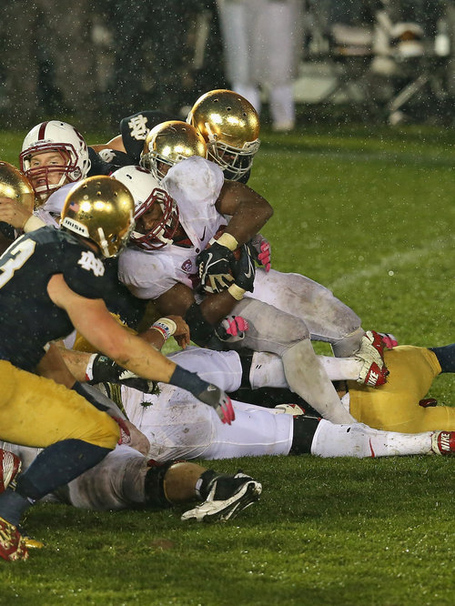 -This was almost Stanford's 1st road offensive touchdown on the year. But it wasn't!
-Anybody who tells you that this was either definitely a touchdown or definitely not a touchdown is lying. There's nothing definitive I've seen from any angle. Stepfan Taylor's forward progress might have been completely stopped, or it might not have. His elbow/arm might have been down, or it might not have. Sometimes we don't get a definitive answer.

So, why do I not feel sorry for Stanford? (Beyond them being Stanford, of course.) Because Stanford had 4 plays from the Notre Dame 4 or closer and handed off to Stepfan Taylor up the middle 4 times and failed to definitively score. Stolen blatantly from EDSBS commentor Bob Genghiskhan: 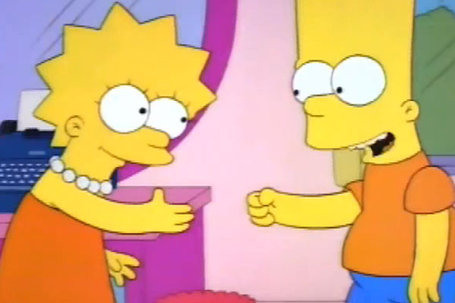 Want to avoid controversy? Get your running back a hole and let him get his whole body across the line.

The overtime drama overshadowed how ugly the rest of the game was. 5 turnovers, lots of penalties, and two starting quarterbacks who combined to complete less than 50% of their passes. Credit two excellent defenses, but also credit two very questionable offenses. And from the Cal perspective: In Stanford's two losses, Stepfan Taylor was held to 3.6 yards per carry. In Stanford's 4 wins he averaged at least 4.5 per carry.

Rule of Tree doesn't want to talk about it:

I might eventually write some words about today's game, but for now I'll let you try to make sense of this.

I wasn't expecting Oregon State to drop 42 points on BYU even with Sean Mannion, so this performance caught my attention. Cody Vaz averaged more than 10 yards/attempt while eclipsing 300 yards and 3 touchdowns, and all that without much help from the run game. Wow.

A few late BYU turnovers made the final score a little deceptive (the game was tied entering the 3rd quarter) but the bottom line is that the Cougars have a solid defense and Oregon State still left with a comfortable road win. The evidence continues to suggest that the Beavs are legit.

Building The Dam is pretty happy with the OSU offense:

I think the numbers are also an impressive narrative about how special this OSU team is turning out to be. Who would have thought the Beavs would be, for the most part (3rd down efficiency needs to improve) so impressive on offense with a back-up QB and against a tough BYU defense.

OSU's schedule before Cal visits Corvallis: Utah, @ Washington, ASU, @ Stanford. How many losses will the Beavers have when they play our Bears?

The Trojans completely dominated the first half, entered the locker room with a 24-7 lead, and it looked like it was going to be a total rout. Then the entire USC offense decided to take the 2nd half off. Luckily for them, Washington wasn't able to do anything with the chances they were given when four straight promising 2nd half drives ended in a missed field goal and three turnovers.

The end result was a game in which neither team seemed much deserving of a win. But USC was clearly the more talented team regardless of their propensity to play down to their opponents on the scoreboard.

It is pretty clear that Kiffin is playing things conservative. I can buy into the team concept over individual numbers, but that is a hollow argument to me. I have a hard time believing that Matt Barkley came back for this. The school has a Heisman campaign for Barkley but Kiffin takes the ball out his hand? I won't argue that Barkley staying would probably tighten some things up in his game, but not like this.

That the team came out flat and found themselves in a big hole going into halftime, down 24-7 after a demoralizing blocked punt for a TD, was disappointing; that they came back in the 2nd half and showed they had the resolve to fight back and the ability to win the game was encouraging; that they continued to make critical mistakes to torpedo their chances was highly frustrating.

Washington has survived the first half of their schedule (that included 4 teams currently ranked) with a record of 3-3. BUT, they only have two more home games left. What will be their final record?

A snoozer of a game. UCLA got out to an early lead and seemed content to hand the ball off over and over to kill the clock because Utah didn't seem a threat to ever score enough points to actually win . . . and they were right. The Utes finally punched in a touchdown to narrow the gap late in the game, but UCLA ran down the clock on their next drive to functionally end the game. Snore.

Brett Hundley was efficient through the air in limited duty, but Jim Mora elected to call running plays on 70% of UCLA's snaps. On the other side, true freshman Travis Wilson made his first start at a Ute and was solid if unspectacular. But with the limited Jon Hays graduating after this season it's clear that Wilson is Utah's future, and he showed enough against UCLA to leave Ute fans wanting more:

The good news is that for his first start ever, especially on the road, Wilson looked okay. Yes, there was the interception and he did look tentative and overwhelmed at times, but for the first time, really, since the 2010 season, I saw some movement down field and an offense that, when it wasn't vanishing on 3rd and 4th down, looked like, you know, an offense.

Meanwhile, Bruins Nation is learning how to trust again:

But there is still discontent in Bruins Nation. And while I appreciate the win, yesterday honestly didn't really excite me much either. I think there is still a big hangover effect from Cal, You could see it in all the comments here during the week and throughout the game thread, by those both pleased and dissatisfied with the game. Bruin fans just aren't willing to rely on this team. It's kind of the way you don't head out on a long road trip in a car you don't trust.

Now that Travis Wilson is starting, are you more, less, or equally scared of Utah as you were a week ago?

This game was fun for a half. Colorado took advantage of a few ASU miscues and trailed just 20-17. And then ASU returned the opening kickoff of the 2nd half for a touchdown and everything reverted back to what everyone expected before the game started. 5 seconds later it was 51-17 and what just happened?

House of Sparky is happy that ASU solved their 1st half doldrums:

Wide receiver Rashad Ross silenced the doubters on the opening kick-off of the second half, returning it for a 100-yard touchdown. Head coach Todd Graham was not pleased at the half, but he was certainly happy when it took his team just 11 seconds to go up 27-17. In the end, ASU's high octane offense exploded for 31 points in the second half.

Ralphie Report is unhappy that ASU solved their 1st half doldrums:

I'm actually impressed by this team. I know it's hard to say, but look at the first half from each of the last two games. These are teams that are more talented than we are, and we've hung with them for 30 minutes. Unfortunately, Football is a 60 minute game.

Is ASU's statistically elite defense really that good, or a product of having faced a weak schedule?

All kinds of good news abounds this week in the Pac-12. For one, there's an excellent Thursday night game this week after two relative duds. For another, Washington State has a bye week. And only one game looks completely unwatchable.

So, does Arizona State's nationally ranked defense stand a chance at slowing down Oregon? Can Arizona and RichRod get off the Pac-12 schneid against Washington? Is there any reason to think that the Beavers won't keep rolling right along undefeated? And will you be in Memorial Stadium, unleashing a hell-storm of noise upon Josh Nunes come noon on Saturday?