Let's meet all the awesome Cal athletes representing the Cal Women's Basketball Team for the 2012-2013 season!

TwistNHook: Hello, Cal fans. I know that you are knee deep in football season right now. But the winter sports are right around the corner! One team to definitely keep an eye on is women's basketball. They had a great season last year in Coach Lindsay Gottlieb's first season with the Golden Bears (as head coach, at least). They are looking to build on that great season in 2012-2013.

On Saturday, October 14, 2012, they held their Tip Off event. This was the 2nd one. The first one was last year. Coach Gottlieb intended it for an introduction not only to a new attitude with Cal WBB, but also to the team itself. This year, an introduction to the players was not quite as necessary as Cal only had one new player.

It seemed Coach Gottlieb intended for this event to create the atmosphere of expectations for 2012-2013. During her remarks, she spoke often of being an "elite" team. She spoke about how many other basketball coaches had similar thoughts either at the tail end of last year or heading into this season.

NorcalNick: I too was struck by how strongly Coach Gottlieb embraced high expectations for this season. I wouldn't say that she came out saying that she 'expects' Cal to beat Stanford, but she more or less said that the season will be measured by how many nets the team cuts down. Last year she talked about her vision of Cal becoming a program like UConn or Tennessee, and it sounds like she thinks this is the team to get there.

TwistNHook: But most importantly, it was another opportunity for the Cal WBB fans to enjoy time with the team. I will say that Coach Gottlieb has turned the WBB team into one of the few teams on campus where the average fan can get a lot of access. You don't need to donate significant amounts of money to chat with her. While you have to wait in line for a long time to get your photo and 5 second conversation with Coach Tedford at the Cal Football FanFest, at the WBB Tip Off event, everybody mingles like it was some sort of work networking event. 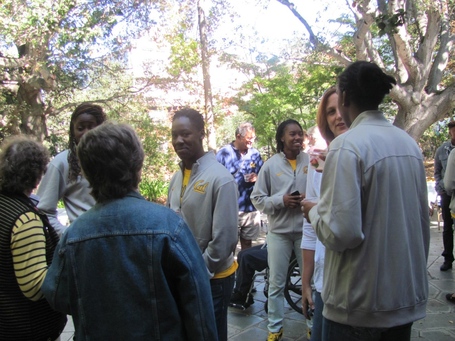 The videographer was on hand. As you'll see in this post (and the future), the WBB team has plans for lots of video. This will help humanize the players and make them seem more like your friends! 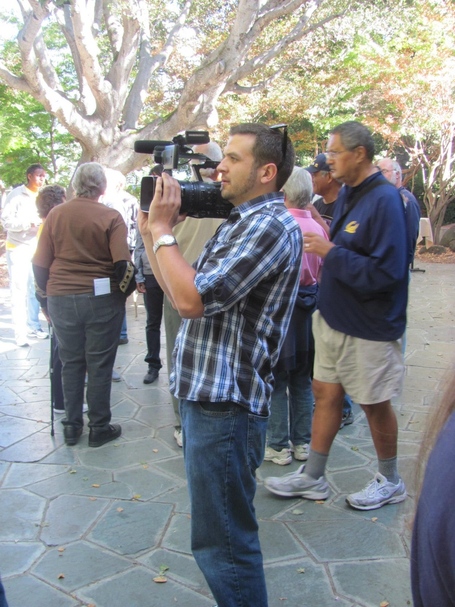 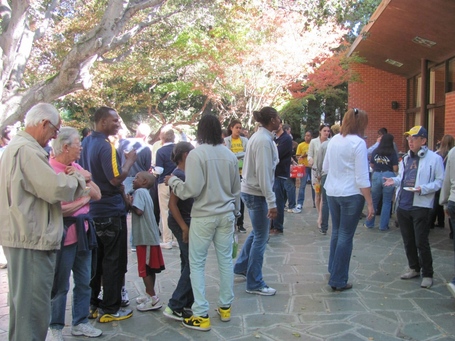 I attended with NorCalNick, AEE07, CalNet, PaleoDan, and fiatlux. We chatted with some of the players and Coach Gottlieb. After social hour was over, we retired to the Alumni House to hear speeches, meet the team, and see some of the videos. 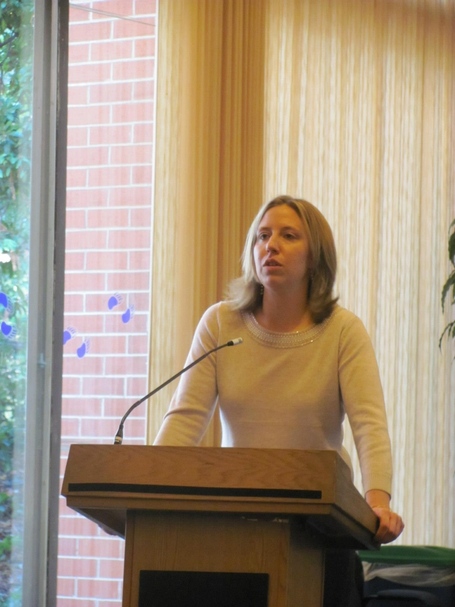 Coach Gottlieb spoke first. As I noted above, she talked about her expectations for the season. She talked about how last season went and how encouraged she was at the end (even in defeat to the Golden Domers).

They had some videos that they showed, talking about last season and what to expect this season. Sadly, unlike last year's Tip Off event, they did not have any dance videos! 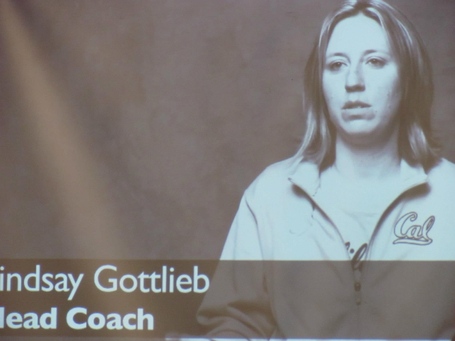 This is Coach Kai Felton, who introduced the freshmen and sophomores. 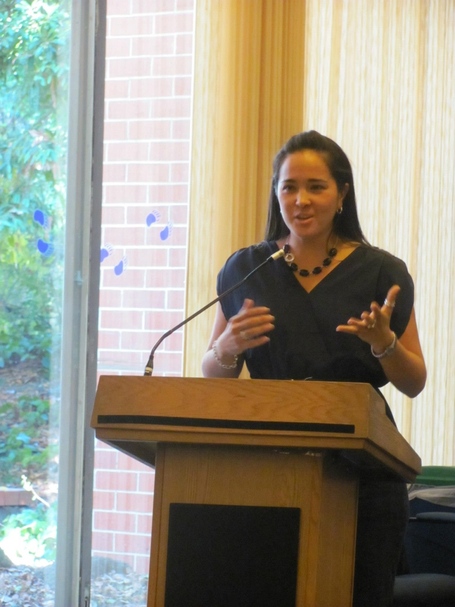 There are apparently no freshmen. But there is a new player on the team, junior transfer Brittany Shine, seen here modeling Gap's 2012 fall line. They had fashion shots for all the players. I really wish they did this sort of thing for all of the teams. I'm imaging C.J. Anderson is a navy blue double breasted suit with a french cuff shirt and a nice tie clip. 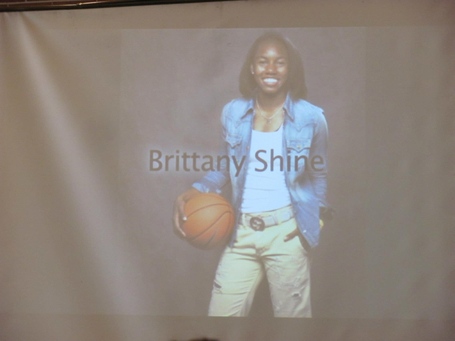 This is new Coach Katy Steding (sadly, from Stanford, but we can overlook that for now), who introduced the juniors. Coach Gottlieb had many, many positives to say about her. Not only was she a great player herself, she's been coaching in various places in America for years now.

She is helping the post players really well, which is great. Coach Gottlieb talked about how she is helping all four Cal post players really develop. They are going to try to get 3 of those players on the court at various times. We need a name for that. The Tri Towers? The Twin Towers With One Additional Towers? Maybe a name that doesn't reference towers? This is why we have you, the reader!

NorCalNick: Coach Gottlieb saying that Cal would potentially play 3 posts at once was pretty exciting. And it's obvious to consider why. Talia Caldwell is a senior and a key team leader. Gennifer Brandon is arguably the best rebounder in the country. Reshanda Gray actually was the team's leading scorer per minute on the floor. And Justine Hartman is the highest rated recruit in Cal women's basketball history. So it's a shame that two of those players have to always be on the bench. But not any more?!? We'll see if it works out, and which players would be challenged to guard more on the perimeter or handle the ball more. Should be fun to watch! 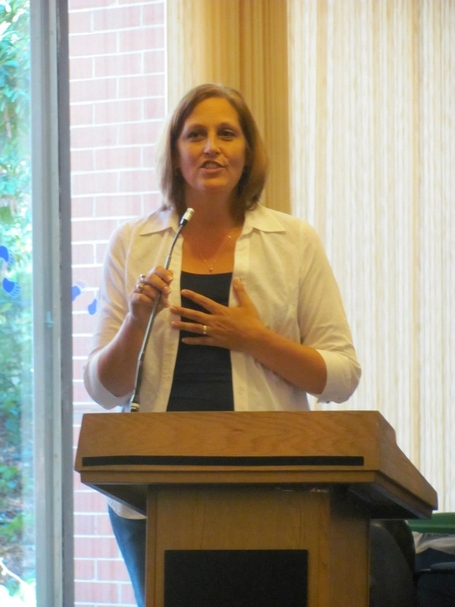 TwistNHook: I loved this photo of Mikayla Lyles, because I felt like she was auditioning for a role on Murphy Brown. Also, I'm 100% certain that 14+ year old references are EXACTLY why you come to CGB! Maybe I'll slip in a Melrose Place joke later! Who knows what the future holds????? 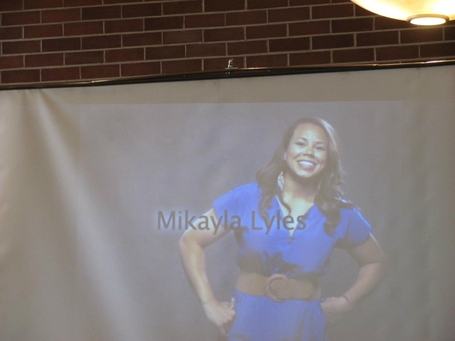 Coach Charmin Smith came out to introduce the seniors. Coach Gottlieb spoke about how Coach Smith is essentially a 2nd head coach. A Co-Head Coach. She has been promoted to Associate Head Coach, although the distinction between that and Assistant Coach is lost on me. 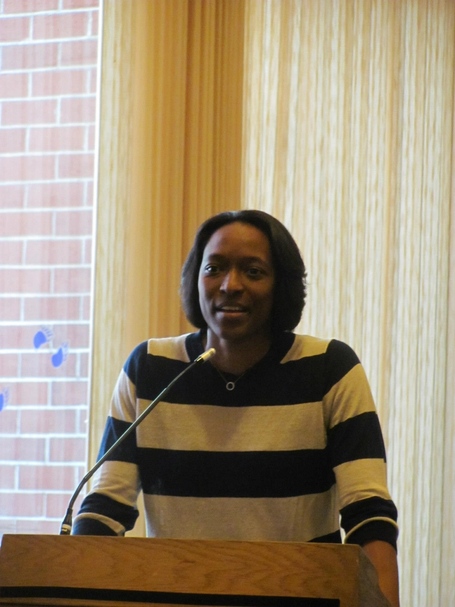 She introduced the seniors, including Eliza Pierre, seen here doing her best Steve Urkel impersonation. The entire team has a very unique vibe to it. They don't seem like your standard jocks. Just look! 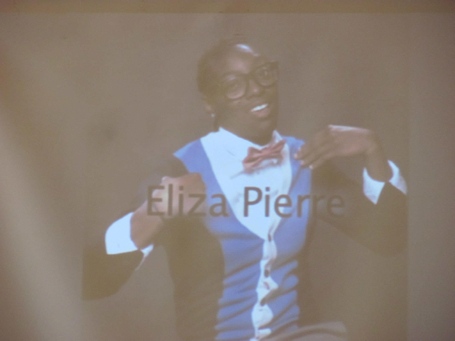 The player on the left is Tierra Rodgers. She is a current player on scholarship (Cal appears to play one player down, because of this). However, due to a rare heart condition she cannot actually play. This is a devastating situation that cut short a fiery bright career. Here is more info:

So when Tierra, one of the nation's top prep players at Sacred Heart Cathedral, collapsed on the court in Berkeley on Sept. 21, 2009, it sent her spinning toward a cruel and painful outcome. Less than two weeks later, she was diagnosed with arrhythmogenic right ventricular dysplasia, a rare genetic disease that can cause dangerously abnormal heart rhythms.

Her basketball career was over, even before her first college game.

One year later, Rogers, 19, remains on scholarship at Cal as she searches for her role with the Bears - part coach, part teammate, part cheerleader - and her direction in life.

She's a full-time student and former athlete with a defibrillator implanted in her chest, a frightening reminder of her own brush with death (she stopped breathing for more than a minute).

Coach Gottlieb was in tears talking about Rogers. How she is on pace to graduate, how she is an important part of the team, how she is taking part in a new medical study that may help people also struggling with her rare heart condition. This is all great news and I hope everything continues to go smoothly for Rogers. Plus, I love her haircut. 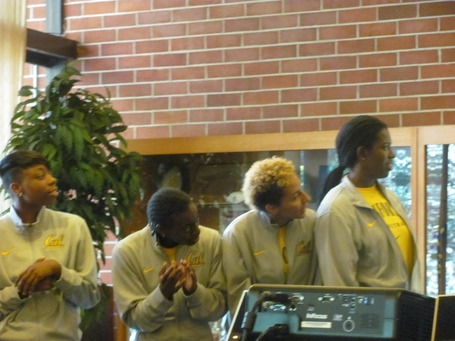 Here is the full team. Another photo of the team is at the top of this post. 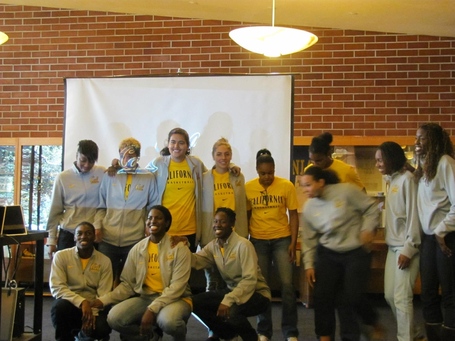 Coach Gottlieb gave some further remarks and introduced Sandy Barbour who rolled in part way through. 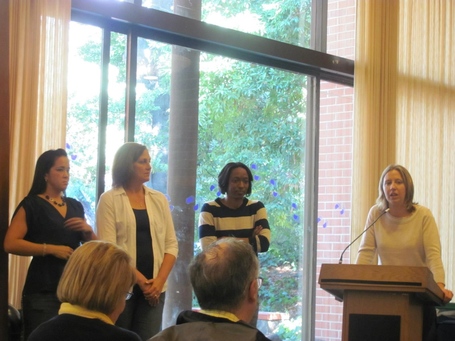 She looked to be in pretty good shape considering that she flew back with the football team from Eastern Washington just this morning. Apparently, they got in at about 4 AM in the morning. But she is a trooper. She was out at this event and at the Cal v. UCLA volleyball game afterwards.

She spoke about how important a WBB team is to any and every athletics department. She spoke about how people were telling her how respected the Cal WBB team was after their successful season last year. She did her usual Sandy thing, rah rah rah! The AD is part CEO, part cheerleader, part face of the franchise.

I know there are some critical of her management of the football team and the baseball team etc etc etc. I have few criticisms of her and in regards to the WBB team, I think she hit a grand slam with her hiring of Coach Gottlieb. 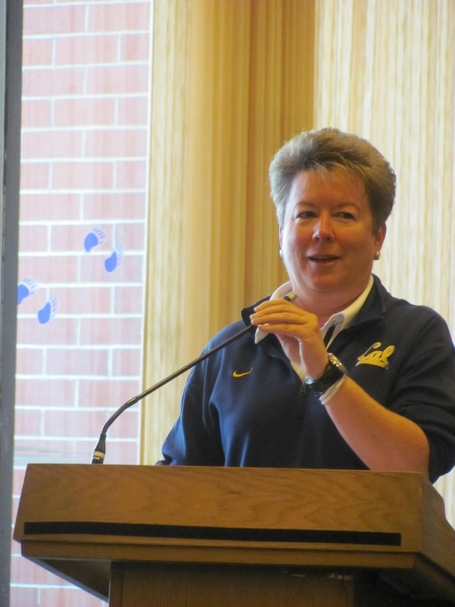 They finished off the afternoon with a sneak preview of some of the video you can expect at ThisIsCalBasketball.com. Coach Gottlieb has essentially seceded from Cal Athletics marketing and has decided to do it her own way. She started it last year and there is a relaunch in a week of the Cal WBB website. They have some of the fashion photos as noted above and some videos. Plus more! There will be webisodes. They showed a bit of one here.

I apologize for the angles of the shots here. I ended up sitting behind Talia Caldwell (listed at 6'3"), so I kinda had to angle a bit to get some of these shots. 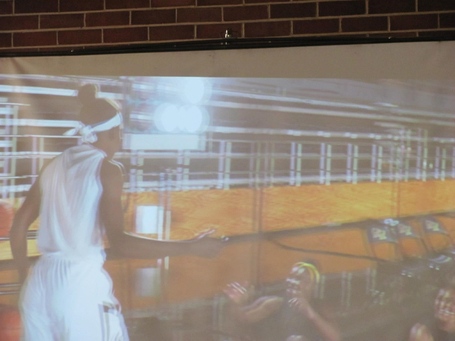 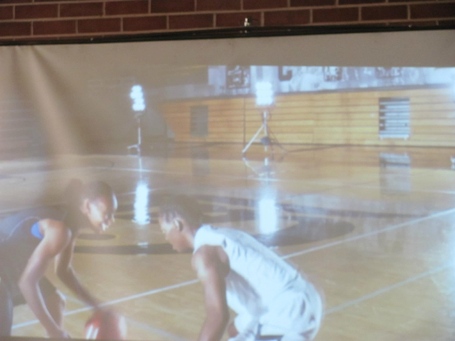 And there you go! Last year, Coach Gottlieb rang the bell for a new era in Cal WBB. She talked the talk, but also walked the walk with a successful season. This year she raised the bar. Can this Cal team walk the walk again? I am looking forward to following the season all year long. This will be made especially easier with the Pac-12 network. Most of the games are on TV! As long as you don't have DirecTV!