A Question and Arrrh!nswer with Jeff Nusser, devoted Cougar, CougCenter.com

Air Raids and Pirates and Cougars, oh my! It's Washington State week, which means the Cougars are out and about, prowling on the weak in search of a turn-around to their season. This week, we talk to Jeff Nusser and Brian J. Anderson of CougCenter.com, who took the time out of a week spent sick to answer our questions. Head over to CougCenter and say hi, as well as wish Jeff well!

Share All sharing options for: A Question and Arrrh!nswer with Jeff Nusser, devoted Cougar, CougCenter.com

1. Halfway through the first season under Mike Leach, the Cougs have only won 2 games. Why hasn't the team lived up to expectations?

Jeff Nusser: The offense -- it just hasn't clicked the way we all expected it would. The defense is much better, and the special teams are vastly improved, but the offense? It's definitely regressed from last season. The Air Raid isn't the Air Raid yet.

Brian J. Anderson: Seeing as how no one really put a ton of expectations on the defense or special teams, the let down has been offensively. Everyone predicted a smooth transition from our single back offensive style of the past 20+ years to Mike Leach's Air Raid. The quarterback play hasn't, to date, executed at the level it needs to in order for Coach Leach's offense to work. Compounding things, the Cougs have yet to put together a full game. We've seen flashes of both offensive production and great defensive play, but rarely during the same game, and even more rarely in the second half.

2. Neither Jeff Tuel nor Connor Halliday has been very impressive this season. What's wrong with the Cougs' passing game?

Jeff Nusser: Lots of blame to go around on this one, I think. The quarterbacks are obviously the most noticeable, and each guy has had a high-profile issue. Tuel has been indecisive and sack prone; Halliday has had a tendency to lock onto his first read and force the ball, resulting in a lot of interceptions. But it's not just those two guys; the wide receivers have dropped a lot of passes and been unable to achieve the kind of separation they should, and the offensive line hasn't been able to take any pressure off the pass game by getting a push on running plays.

Brian J. Anderson: Jeff pretty much covers this one. Both quarterbacks have struggled with the quick reads in the Air Raid, receivers are finding open space but getting the ball there and catching it have been a little bit of an issue. The running game has been non-existent and they haven't quite learned how to mitigate that with the short passing routes yet. The offensive line is currently a weak area, but their ability to pick up the blitz does seem to have improved over the past couple weeks. The offensive tackles have a tendency to be outmatched by defensive ends, allowing pressure from a three man rush at times. It would be a challenge for any quarterback to throw into an eight man coverage while under pressure.

3. From an outside perspective, this Cal game is looking like a must-win for Wazzu since 3 of the next 4 games are on the road. How important is this game for Washington State fans?

Jeff Nusser: It is, but probably not as much as you think. Our fans have sort of resigned themselves to the idea that we're not going to finally get back to a bowl game. We've been down for so long now that it doesn't take much for us to lower our expectations, and that Colorado loss was a killer. 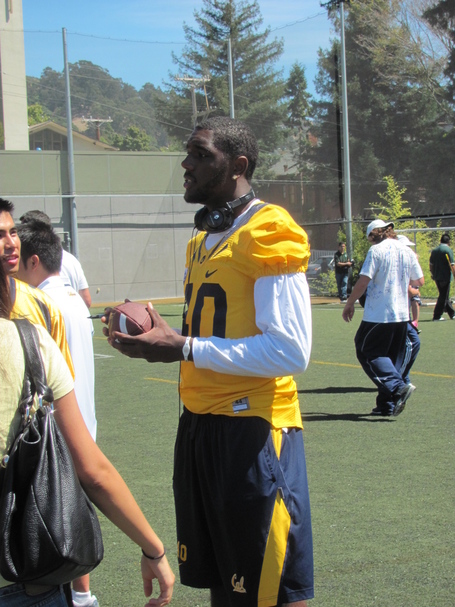 This beast of a McCain will lead Cal's defense against the Air Raid offense of the Dread Pirate Leach.

Brian J. Anderson: Most Coug fans gave up the idea of a bowl game after Colorado and are really just rooting to see the offense click, to see some evidence of a turnaround. That being said, this game is a must win in order for any of those bowl hopes (that might still be around) to be even remotely plausible.

4. You were really excited about Mike Leach bobblehead day when it was announced during the summer. Are you guys still excited? (We certainly are)

Brian J. Anderson: Yes. I imagine twitter and facebook will be forever filled with images of Mike Leach bobbleheads at various locations. Odds that there will be at least one image of him drinking out of a red keg cup at a Coug tailgate are set at 1,000,000,000,000 to 1.

5. What WSU player on offense should we know?

Brian J. Anderson: Jeff took the big two on offense so I'll mention another receiver, Isiah Myers. Myers worked his way into a starting position and even prompted a move of our freshman wide out Gabe Marks to inside receiver in order to get both on the field. His production fell off a little against the Oregon schools, but Leach has called him one of the Cougs' most consistent receivers. He's probably the closest thing Wazzu has to a typical possession receiver, getting targets on 3rd down and finding a way to move the chains.

6. What WSU player on defense should we know?

Jeff Nusser: Travis Long. That's easy. He fills the "Buck" linebacker role for the Cougs, which is a hybrid DE/OLB position that defensive coordinator Mike Breske uses to disrupt the offense. He'll line up all over the place -- hand on the ground, standing up, outside ... even inside at middle linebacker. He's got 7.5 sacks and is the unit's heart and soul. They follow him.

I could not resist including this beautiful scene once again. Let's hope for a similar scene in the visitors' locker room at Martin Stadium this Saturday.

Brian J. Anderson: This one is definitely Travis Long. Another guy to know would be safety Deone Bucannon. He's made 4 interceptions and can fill on run responsibility, leading the team in tackles. While it's not great a safety is the leading tackler, it does show he has no problem closing and filling holes when the running back gets to the second level.

7. Washington State's defense has turned in two pretty solid performances against Oregon (for a half at least) and Oregon State after an ugly start to the year. What's behind the suddenly improved performances, and do you expect them to continue?

Jeff Nusser: It's both scheme and personnel, I think. Newcomers include Ioane Gauta and Justin Sagote at nose tackle and linebacker, respectively; Gauta is awfully hard to move off the line, while Sagote just flies around and makes plays. Then there is a couple of redshirt freshmen in DE Xavier Cooper and MLB Darryl Monroe, both of whom would have played extensively last year had they been able to. Throw in the things I mentioned about Breske's alignments with Long, and you've got a recipe for a pretty rapid improvement.

Brian J. Anderson: Positioning was a large problem at the beginning of the season. Guys didn't seem to be in the right spots to make plays. Missed assignments (or that's how it looked to us at least) resulted in a fair amount of big plays. A lot of that has been corrected by their hard work in the film room. Defensive players were talking this week about how they lived in the film room prior to OSU, and the even better news was that nothing OSU did offensively surprised them. They were well prepared, in position to make plays, and the end result was the best defensive effort all season against the second best offense they've faced. If they find a way to replicate that preparation weekly, I would suspect they'll continue to have some success. Defensive coordinator Mike Breske will not make it easy on an offense, throwing a variety of stunt and blitz packages at a front with a zone behind it.

8. What does WSU have to do to win this game?

Jeff Nusser: Not have Halliday throw a bunch of picks. That would be a great start, because if he's not doing that, the offense is probably moving, and I like WSU's defense to play well enough to give the team a chance.

Brian J. Anderson: Defensively, they have to stop the run. Cal has ran all over WSU for about a decade, it would be nice if that didn't happen Saturday night. Forcing the Cal offense into more passing downs that it's comfortable with could be a good thing, considering how erratic Zach Maynard's been. However, it'll be a long game if he and Keenan Allen are connecting. Offensively, Jeff covered the main one. Also, they need to score if they get in the redzone, there's been a lot of missed opportunities this year and Cal's offense proved it can put up points last week.

9. Who would you like to make walk the plank?