bearbackers and Roflcoptering continue their domination - can anyone stand in their way?

50 participants this past week, and no clean sweep picks. How bizarre.

Also, I'm gone for four weeks in Asia and don't update my team at all, only to find...
Well, how about that? I rule. 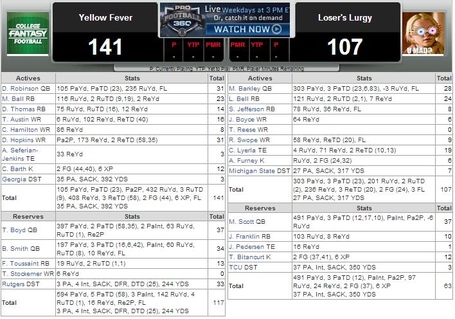 DOWN GOES LOSER'S LURGY 141-107. Thanks be to Denard Robinson, who somehow managed to be only the third highest scoring QB on Yellow Fever, Montee Ball and the anemic Wisconsin offense, De'Anthony Thomas and his six touches a game, and DeAndre Hopkins with 31 points. Thanks for that. No thanks to the Georgia defense, which plays in the S-E-C by managed only 3 points. Go team. 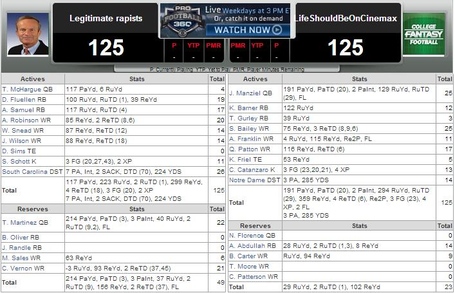 In what is believed to be a first, we HAD A TIE 125-125 between Legitimate Rapists and LifeShouldBeOnCinemax. I don't know about you, but I'm going to celebrate with some sake out of my new Hong Kong tourist shot glass. Legitimate Rapists was led by the South Carolina defense and a bunch of guys I've never heard of (would have helped to play Taylor Martinez, who I have heard of), as they played to a tie against...a whole bunch of other guys I didn't recognize. Oh, and Stedman Bailey. That guy is pretty sweet. 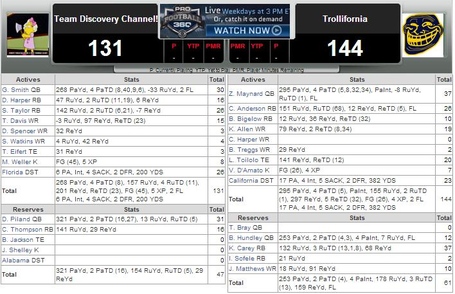 Team Discovery Channel fell 144-131 to Trollifornia. Our Bears winning by a count of 43-17 will do that. Zach Maynard managed to outscore Geno Smith (!!!!!!) 37-30, and the duo of C.J. Anderson and Brendan Bigelow combined for 36 points. Chris Harper and Bryce Treggs combined for a total of 2 points, but hey what is that Stanford TE doing here?!?!?! and the California defense put up 43 points of their own to help the cause. 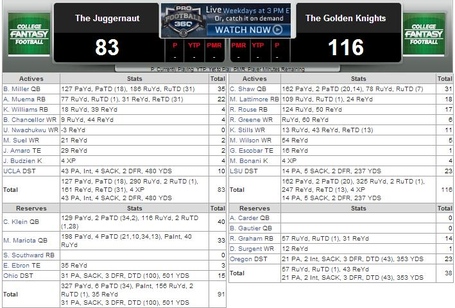 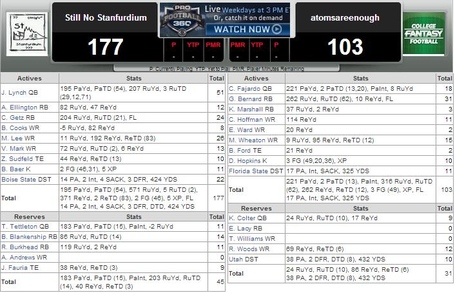 Still No Stanfurdium rolled atomsareenough by a count of 177-103 behind some guy I've never heard of. Seriously, who is this J. Lynch character? Is Jane Lynch into college football now or something? Yes I know bad joke. Son of Ostrich Cody Fajardo had a decent game, but maybe his ship has sailed, eh?