Throughout this crazy week, we haven't really taken the time to getting around to talking about the great job Steve Sarkisian is doing up at the University of Washington. You have to hand it to him. What will he do next? Redonkulous Bear was quick to provide this depiction of events.

So this letter was written on behalf of Cal nation to appease Sark. We hope Cal fans take with it the same spirit and join us in thanking Sark in the great work he's done up in Seattle via the many suggestions and links we offer below. We encourage others to contribute and making sure Sark knows that we know the good things he's done.

I see that you've been up to some big things in Seattle. A lot of "Woof woof woof" this and that. And we're proud of you. You've proven you are a formidable opponent, and you are a worthy challenger.

We've heard you're trying to torpedo our recruiting class. That's absurd. It's neither here or there that our former coach decided to pay courtesy calls to guys he helped to Cal and try to get them to flip to UW. We're up to four examples now, but we're sure it's all a big practical joke you're playing here and that you're telling them great things about our school.

Plus that other coach that you took that brought in six receivers to be Bears who now could be reconsidering their decisions? Big coincidence I'm sure.

We notice you have a website full of great announcements about signing day and hirings like these two fine gentleman Mr. K and Mr. L! Best of all, you have a comments section on all of these posts! I sure hope Cal fans everywhere will let you know on your excellent blog their feelings on how incredible your accomplishments are. They surely won't spread any of those nasty rumors you hear on the Internet.

Oh the rumors? You haven't heard?

Well, we've heard people going after you for your breathless accomplishments. It'd be awful if a bunch of people started making unscrupulous allegations to tarnish your spotless reputation.

Absolute nasty that anyone would try and say something like that. We sure don't want people to think that Steve Sarkisian dreams every night of taking creatures like our friend below. 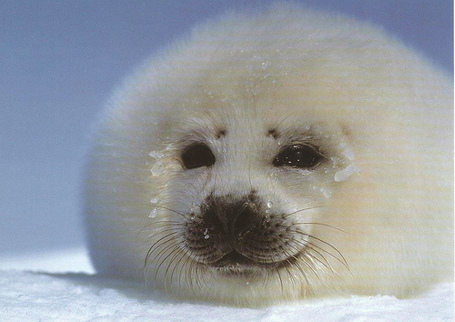 And then wrestling with them in the snow until they're moaning and tapping out. That would just send the wrong message. We've seen innocent 'Mericans like Craig James feel the fire of such baseless accusations. We don't want any of our members to think such horrible things, or especially tell their football friends about it on various message boards or websites. That would be a tragedy.

Well, I say no. We refuse to believe that Sark the Serial Seal-Beater actually exists, and all of you out there reading this should make sure that if people ever let this rumor spread online, that everyone else online knows that too. You don't want people to be going searching for Steve Sarkisian and then seeing "What's this I see about seals?" Washington fans, if you ever get angry about this rumor, just remember no one saw Sark ever sucker-punch a seal pup.

Finally, we have to thank you for paying attention to us. We thought people forgot we existed. It's rare to see such dedication to try and mess with a fellow 7-6 football team. Identical records and you want our coaches for ten billion dollars and a boat? Crazy thing.

You must really think we can do something, huh? We thank you for the consideration, because most people thought we were irrelevant. Thanks for making us feel welcome again. It's good to know we're doing something right, because otherwise you're doing something very wrong.

PS: We sure hope no one posts photoshops/animations of Sark or his two new lackeys doing such things in the comments, or other such images anywhere on the Net.