Week 1's in the books! Let's take a look at how everyone did:

There were about a million people tied with 15 correct picks for the week. Some trend analysis after the jump. 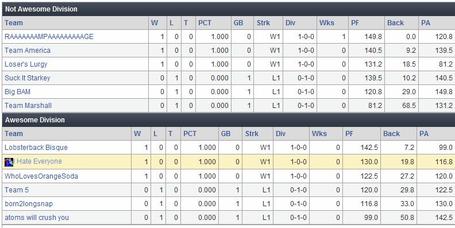 RAAAMMPAAAAGE (all spelling approximate) laid down the hurt this week. 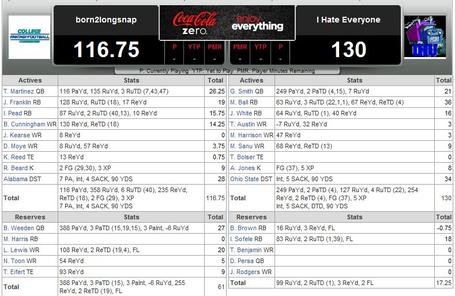 I Hate Everyone hated all over born2longsnap 130-116.75 courtesy of the Wisconsin running game, as Montee Ball and James White trashed the UNLV defense for a total of 52 fantasy points. Tavon Austin managed a kickoff return for a touchdown, but because CBS Sportsline is retarded, that didn't count for jack shit. We are migrating over to Yahoo! when they get their college fantasy football together. born2longsnap was led by T-Magic and Isiah Pead, but it wasn't enough to overcome a total of less than ten points from its receivers. 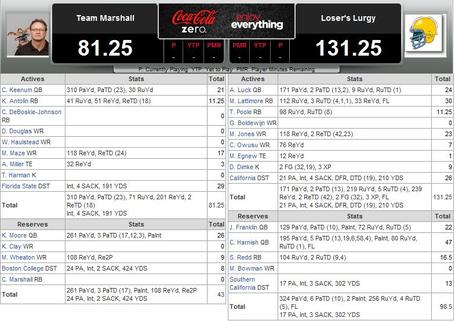 Loser's Lurgy crushed Team Marshall 131.25-81.25 in what is hopefully a sign of things to come this weekend. That'll happen when you're starting Covaughn Deboskie-Johnson on a day he gets no carries against strong days from Marcus Lattimore, Marvin Jones, and the Cal defense. 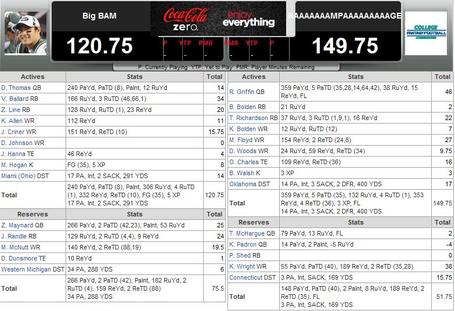 Big BAM came out on the short end of the stick against RAAAAAMPAAAAGGEEE (I really want to stop typing that) 149.75-120.75, as Darron Thomas and Vick Ballard weren't enough to offset the early Heisman stylings of Robert Griffin III. Griffin got ample help from Trent Richardson and Michael Floyd in offsetting KA21 and Juron Criner. Nice avatar though. I guess. 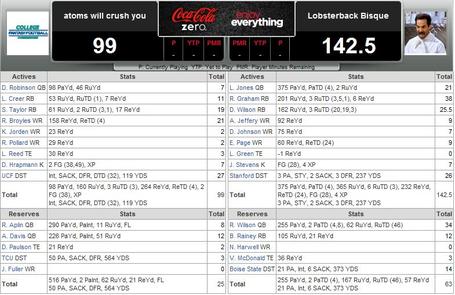 Lobsterback Bisque thumped atoms will crush you by a count of 142.5-99. Superlative efforts by Landry Jones, Ray Graham, and David Wilson were more than enough to offset the meager production put up by Denard Robinson, Ryan Broyles, and a bunch of guys I've never heard of. Note: This matchup includes so many players from the Furd they should have both lost. 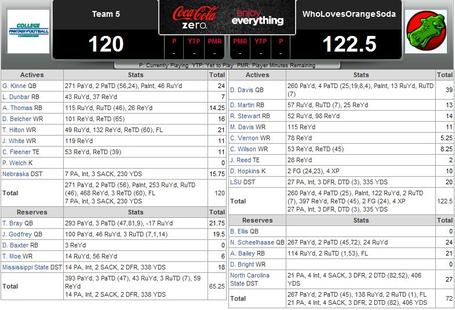 WhoLovesOrangeSoda loved its victory over the creatively named Team 5 122.5-120. Dominique Davis went off for 39 points to lead Orange Soda past the balanced attack of Greg Kinne and company, with seven different roster positions going for between 11 and 24 points. 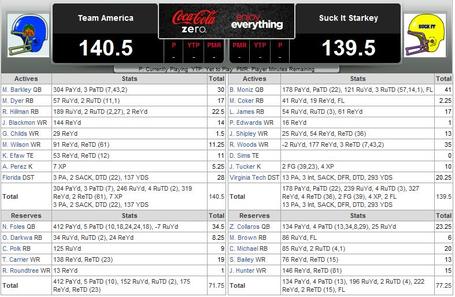 Suck it Starkey took the worst loss of the week, falling 140.5-139.5 to Team America. Bryant Moniz of Hawaii shredded the Colorado defense for 41 points (as we all hope our new best friend Zach Maynard will be doing this weekend) , and Robert Woods chipped in with a strong, record-breaking effort of his own, but that wasn't enough to overcome Matt Barkley, Michael Dyer, and the Florida defense on this day. Better luck next time!