Ever since it was officially announced that Coach Tedford would resume control over playcalling and coaching the quarterbacks, Cal fans everywhere have been waiting with bated breath to see what the new offense would look like. Would it be pro-style? Spread? Read-option? A mix of all-of-the-above? Apparently, the answer is "yes." Despite stating during several press conferences that he wanted to simplify the playbook, cut down the number of plays, and use "more creativity," it sure looked like a diverse, multiple attack.

We saw pro-style power I, single-back spread, bunch formation, empty backfield, pistol, and a few variants using different shifts and motions. I was particularly impressed that we used each of these formations with 12(one back, 2 TEs), 22(two TE, 2 backs), and 21(two backs, one TE) personnel packages; the defense couldn't determine which formation we'd use simply based on our personnel in the huddle. It says a lot for the versatility of Cal's tight-ends and backs as well as the willingness of all the wide-outs to get their noses dirty with downfield blocking.

One of the things I've always loved about the classic Tedford offense is how he'll set up defenses by using wrinkles and counters off of the same formation and motion. After the jump, let's look at everyone's favorite play: The Wide-Receiver Slip Screen!

One tailback at Pistol depth (Sofele), one fullback as a wing (Deboskie), one TE as a wing (Miller), and two wide-outs. Observant Cal fans are raising an eyebrow right about now...Since when did they switch Deboskie to fullback? 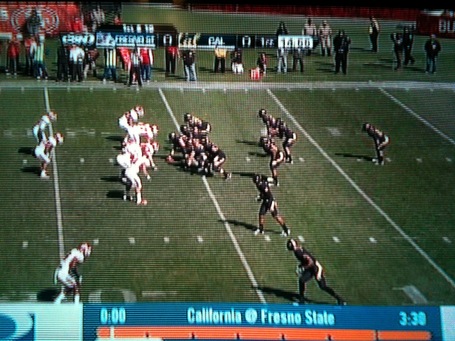 Next, before the snap, Isi Sofele goes in motion and lines up as a wide receiver. 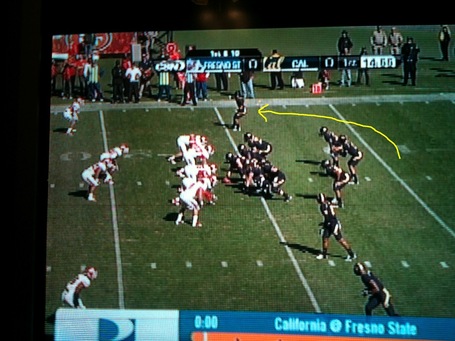 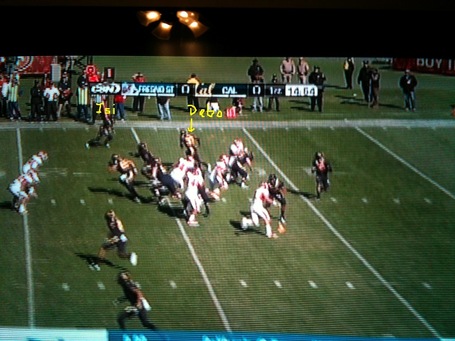 Anyone who has watched Cal football the past few years knows this play. It's the Wide-Receiver slip screen! Because we only ran it eight thousand times a game last year, I'm sure we figured to take FSU by surprise. This play was unsuccessful due to an inaccurate pass. Just to make sure FSU had the idea, we ran similar variants of the down the line or slip-screen several more times throughout the game. *Spoiler alert!*

Bonus Pic #1: Were you curious how Fresno State's tailback, Rouse, was able to get free on their first touchdown? Payne had him in his grasp before he was pulled down from behind. 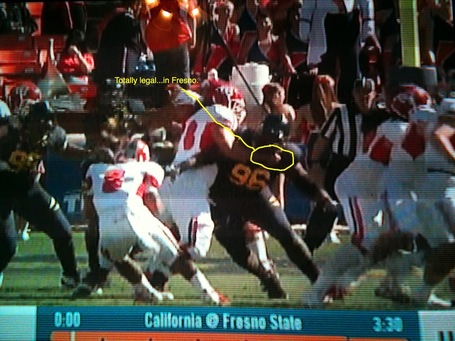 The personnel package here is a little different. This one starts with a 22 package, two backs (Debo and Kapp), one TE on the line (Miller) and one TE as a wing.(Hagan) 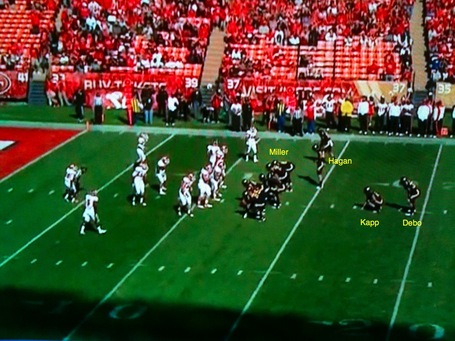 Before the snap, Deboskie goes into motion and lines up as a wide receiver. At this point, everyone and their Cousin Binky are expecting Cal to throw it his way...because that's what we always do. 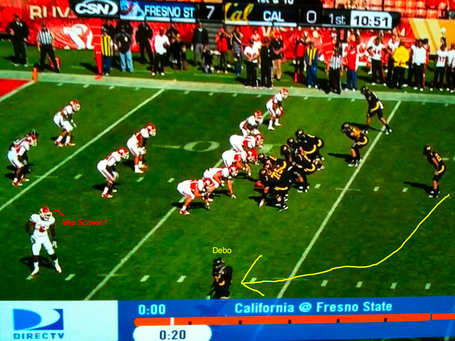 But it looks like we're actually going to hand it off to the fullback - Papa Kapp must be so excited! 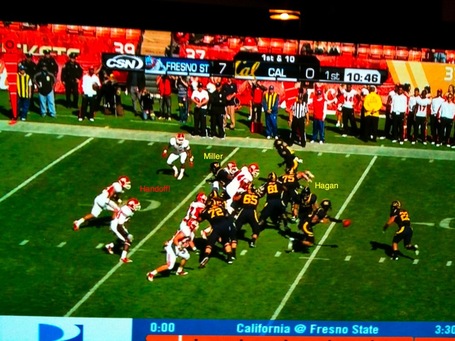 But Maynard keeps the ball and rolls out. Meanwhile, Miller continues to head up field. 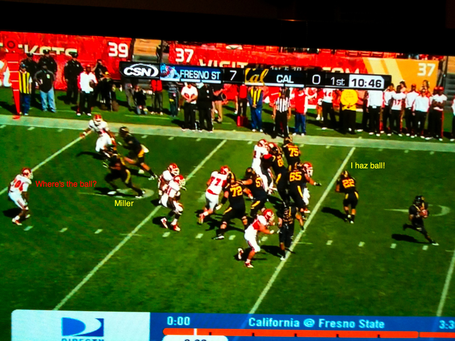 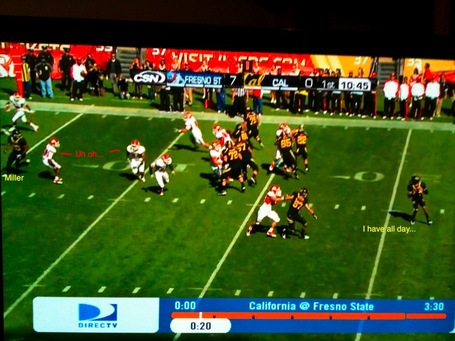 Fresno State's deep safety moves up, but it's too late. Miller comes open and Maynard hits him to set up Cal's first rushing touchdown moments later. 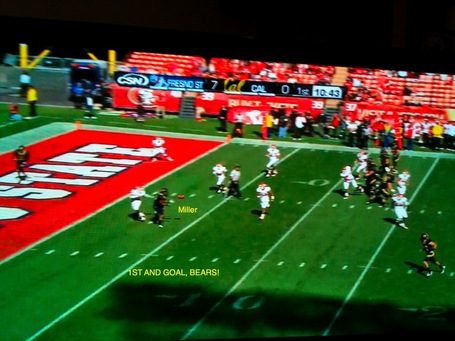 Bonus Pic #2: Although most of us have tried to block his unsuccessful tenure from our collective memory, Joe Ayoob is still throwing. Apparently, he's now involved somewhat professionally with throwing...wait for it...paper airplanes. You can't make this stuff up. 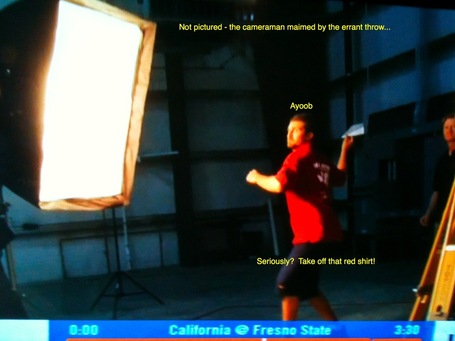 And last, we have play #3, The Counter. Remember how Cal had been throwing quick passes to their wide-outs all game long. The Fresno State defenders were starting to crash the line of scrimmage really aggressively at the first sign of a quick hitch or screen. And that's right where Coach Tedford wanted them...

This should look familiar. It's the exact same personnel package (21) and formation from earlier in the game. As before, the unique feature of this formation is the presence of Deboskie lined up as a fullback. 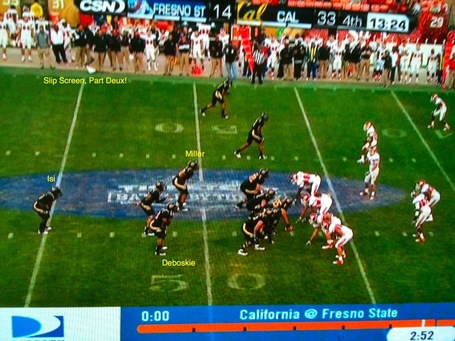 Just like before, Isi Sofele goes into motion before the snap and lines up as a wide receiver. 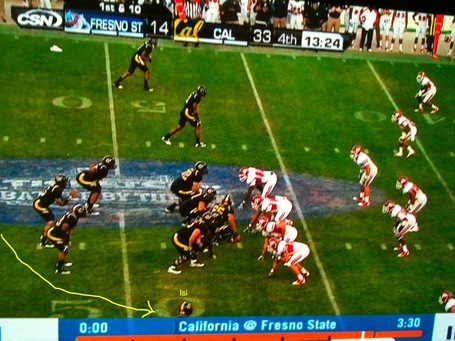 And, just like before, Sofele runs a quick stop route and Deboskie charges pass him looking to block the defending cornerback. 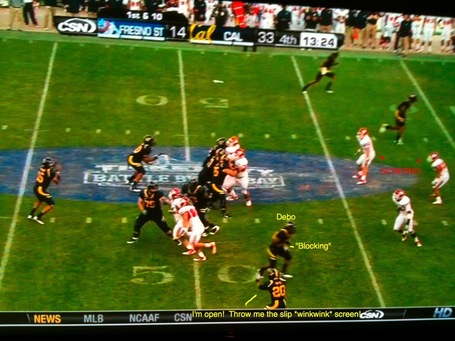 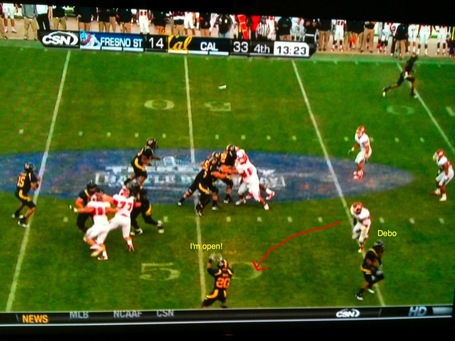 Maynard pump-fakes towards Sofele, then pulls it down and finds Deboskie all alone. 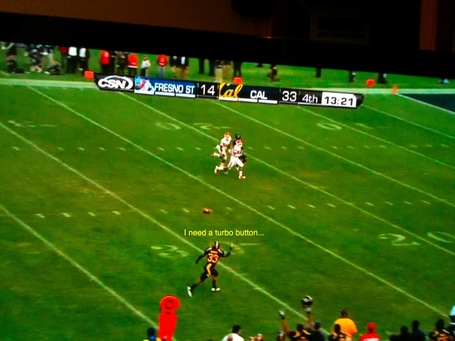 The throw itself was inexplicably a foot too far out of Deboskie's reach. But, that doesn't take away from the brilliance of the play design, how the defense was carefully set-up, and the timing of the call. This is classic Tedford. It's what he does best and I'm excited to see how the offense will evolve as the players improve their execution.

1) When the offense was rolling, there was a nice rhythm to the playcalling that kept the defense on its heels. It was interesting to see the whole team looking to the sidelines for checks at the line. This looks to be something new for the Tedford era. It could take a lot of pressure off of the players for making the right reads, especially the Oline and QB.

2) When the offense struggled, it was due to sloppy play; penalties and missed blocks being the most egregious errors.

3) The right side of our offensive line is still a work in progress. Cheadle gave up one sack, and MSG gave up two. On running plays, we had considerably better push from Galas-Schwenke or Schwenke-Schwartz. It's no coincidence that our best runs were to the left, or left-middle. It was our inability to sustain drives in the second half that was worrisome. Classic Tedford-style would have been to lean on the running game to work on the clock and pound the other team into submission. Unfortunately, it looks like we may not have the horses to do so. In fairness, FSU was being really aggressive keying against the run. In Coach M we trust?

4) Kapp and Tyndall played very well at the fullback position. They did a nice job clearing the way for key runs. Dumont didn't fare nearly as well. On plays where he was in, our running game struggled.

5) Although a bit undersized, Hagan was serviceable as a blocker. Both he and Miller did a good job with sealing the edge in the 1st half. He did seem to have more trouble with FSU's run blitzes in the second half. Having two TEs who are adept at both blocking and receiving really gives Coach Tedford a lot of flexibility with how he uses his formations and personnel.

6) Jones' work with Coach Blasquez has clearly paid off with his increased strength, but also his balance. He, Allen, and Calvin look to be everything we were hoping for out of our receivers.

7) Although the plan might have been to spell Sofele with plenty of CDJ, it looked like plans changed because of Deboskie's struggles in pass protection. He also should have had a touchdown early in the game, but made an awkward leap instead. Normally, I would have expected Isi to sit a series or two after his ball security issues. But, with Fresno State's aggressive rush, we really needed Sofele on blitz pickup. When CJ Anderson gets up to speed, I could definitely see him pushing past CDJ on the depth chart. For the most part, Sofele ran well. He doesn't seem to have the vision or strength to make something out of nothing, but if the line gives him space he's showing a much improved ability to be decisive with hitting the hole. FSU was charging upfield hard on most plays. That made our running game a bit of feast or famine. For example, on Sofele's long TD run, only two FSU defenders stayed back - Allen blocked one and Sofele outran the other. On many of the tackles for loss or no gain, FSU linebackers were shooting the gaps.

8)) Maynard is certainly not afraid to make mistakes or to take risks. For the most part, he made good decisions. His interception looked to be a miscommunication with Jones on the depth of the route. As advertised, he has a strong arm and still needs to work on his touch. I like how Coach Tedford noticed the early jitters and switched to some plays where Maynard is really comfortable to get him settled. (designed roll-outs) Also as advertised, his ability to run out of the zone-read is a dimension that Cal hasn't had out of quarterback position for a long time. As an added bonus, that means no more Wildcat! He showed a little rust and some streakiness, but never seemed to hang his head or get rattled. He showed good command of the offense - the plays got out on time, and the players were in position. For his first game as a Bear, I thought it was a promising start. Whether his footwork and accuracy will improve as he gets more games under his belt and gains confidence is the big question mark. I really wish that Bridgford had gotten a few snaps, but FSU scored while he was warming up and securing the win became more important.