Share All sharing options for: Palms of Victory: Cal beats Fresno State 36-21 in the season opener

Cal began the game on offense. The Bears started with an ugly illegal formation penalty that negated an even uglier incomplete pass on first down. Not an auspicious beginning. And the Bears' second play was even worse! Quarterback Zach Maynard threw his first interception as a Bear on his first official pass attempt as a Bear, putting the Bulldogs in business at the Cal 16-yard line. Less than a minute into the game, the Bears turned it over. And three plays later and less than two minutes into the game, Fresno State had a 7-0 lead. If we'd had a mulligan to use, that would have been a good spot to use it.

From there, however, the game was a different story.

Cal regrouped after the horrendous first possession and answered the Fresno State touchdown with a 12-play, 67-yard drive that gave Cal fans a shot of offense that they haven't had since...since...since how knows when? Highlighted by a 23-yard pass from Maynard to Keenan Allen on a 3rd and 3 and a Will Kapp rush for a first down on 4th and 1 inside the Fresno State 5-yard line, the drive culminated in an Isi Sofele speed run around the left side. The extra point was blocked (oy vey!), leaving Cal behind 7-6, but the presence of offense was a welcome sight.

And the Bears weren't done in the first quarter. Before the quarter ended, the Bears scored touchdowns on three straight possessions, the last two scores coming on a 39-yard run by Isi Sofele (where it appeared Maynard checked off at the line of scrimmage prior to the snap) and a 42-yard touchdown pass from Maynard to Marvin Jones, where Jones caught the ball over the defender, then eluded the tackle to scamper into the end zone. Because of one more blocked extra point, however (oy vey!), Cal's three-touchdown explosion translated to only a 19-7 lead after the first quarter. 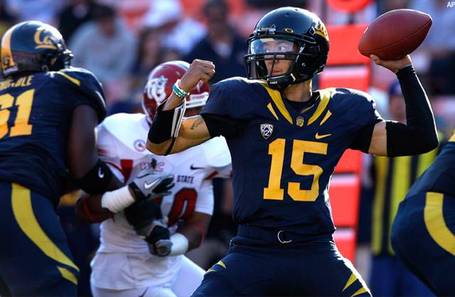 Zach Maynard threw for 266 yards and ran for 53 more in his Cal debut.

But Cal couldn't keep the snowball rolling in the second quarter. While the Cal defense held the Fresno State offense at bay, the offense sputtered in its first two possessions of the second quarter. And on the third possession, disaster struck. An errant shotgun snap was picked up by Isi Sofele in the end zone. Trying desperately to avoid the safety, Sofele made the situation even worse: he fumbled the ball, which was recovered by Fresno State for a touchdown. Despite a half of relative defensive dominance by the Cal defense, the Bears found themselves with only a 19-14 lead late in the first half.

And the Bears's own mistakes shot down any chance at extending the lead before halftime. A questionable personal foul penalty on Matt Summers-Gavin for leg-whipping negated a 47-yard catch and run by Allen that would have set the Bears up at the Fresno State two yard line. A holding penalty and two false starts added to the comedy of errors, as the Bears committed four penalties on the drive. For the game, Cal was penalized 11 times for 86 yards -- numbers that would make even Arizona State blush. Such slop is not uncommon for a season opener, especially when playing in unfamiliar confines. But it was still difficult to watch the flags keep raining down onto the Candlestick Park turf. (And Fresno State wasn't immune from it either: the Bulldogs were flagged for 9 penalties, as the teams combined for 20 penalties in the game.) 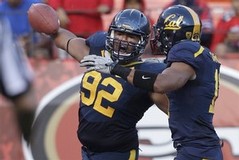 The Bears seized control of the game in the third quarter, keyed by the defense's outstanding performance. Fresno State went three-and-out on the first series of the second half, and Cal immediately put seven more points on the board. Cal quickly marched 91 yards on six plays, the big one being a 48-yard run by Maynard on a 3rd-and-6 play from Cal's 13 yard line. Three plays later, Maynard found Jones for the duo's second touchdown hookup of the day, and Cal had breathing room at 26-14.

Later in the 3rd quarter, the defense's relentlessness resulted in points. Cecil Whiteside forced a fumble by Bulldogs' quarterback Derek Carr. Bears defensive end Trevor Guyton scooped it up and returned it 22 yards for a touchdown, Guyton's first career score as a Bear. Cal's lead was 33-14 and the game was basically decided.

Statistically, the numbers reflected the Cal defense's control of the game. Cal gave up only 210 yards in total offense to the Bulldogs, sacked Carr four times, and forced Carr into two turnovers (the aforementioned fumble and a third-quarter interception by Steve Williams). The Bears were solid defensively, tackled well, and yielded only one big play: a 56-yard pass from Carr to speedster Devon Wylie, which was notable for Cal safety D.J. Campbell incredibly chasing Wylie down to save a touchdown. Fresno State, which relied upon a great deal of short passing, found yards after the catch hard to come by.

As for the Cal offense, there was plenty to be concerned with -- penalties, Maynard's low completion percentage, the two bad turnovers, to name a few. But there were also some good things: two 100 yard receivers (Jones and Allen), Maynard's ability to run (more zone read please!), and the Bears' lack of shyness when it came to throwing the ball down the field.

Most importantly, the game was a win. We'll see how Cal builds upon this before next week's game at Colorado. Some guy named Bo Schembechler used to say that a team improves most between its first and second games of the season. Let's hope it's true in this case, as Cal will likely need to play better to win on the road next week.