Here is the Postgame Thread. Revel in victory and grade the Bears' performance.Follow CGB on Twitter and Facebook

At long last, it's finally here: the start of the 2011 football season. For the first time since 2003, Cal opens the season with a neutral site game. This one is a bit closer to home than the 2003 game in Kansas City against Kansas State. Today, Cal will play its first game ever in Candlestick Park in San Francisco against the Fresno State Bulldogs.

Going to the game? Looking for pregame activity? Check out the info on the unofficial CGB tailgate that Berkules is organizing.

Cal looks to improve upon its 7-2 record in season openers during the Jeff Tedford era. But this one will not be easy. Fresno State is 2-0 all time against Cal (albeit winning those games against Cal teams coached by Keith Gilbertson and Tom Holmoe) and relishes the opportunity to go toe-to-toe with a Pac-12 team. And if reports on ticket sales are an indication, Fresno State can expect the crowd at Candlestick Park to be pro-Bulldogs. 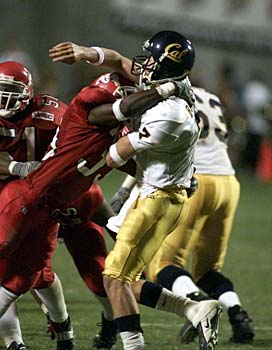 Hopefully, Zach Maynard's day goes a lot better than Kyle Boller's evening in Fresno back in 2000

I could go on. But I'll let y'all go on the comments. The season is here. Hope springs eternal. Enjoy.