The Night the Lights Went Out at Autzen: A Look Back at Cal vs. Oregon, 2003

Share All sharing options for: The Night the Lights Went Out at Autzen: A Look Back at Cal vs. Oregon, 2003

Do these circumstances sound familiar?

Sound familiar?  No, we're not talking about last Saturday's Cal loss at Washington.  As we fans lick our psychological wounds during this bye week and look ahead to Cal's next game -- a stern road test against the mighty Oregon Ducks -- we are reminded of a strange night of football nearly eight years ago at Autzen Stadium.

It was November 8, 2003.  Cal and Oregon played a night game, which was nationally televised on TBS.  And what fans saw that night in terms of the performance by the teams on the field was probably not what we expected.  And fans certainly didn't expect what they saw with 14:40 remaining the fourth quarter.

The Bears came into that night's game 5-5 on the season and were fighting for bowl eligibility.  Though that might sound like a meh sort of season, the 2003 team had arguably overachieved.  It was Coach Jeff Tedford's second season at the helm and Cal had lost several starters off the 2002 team, including quarterback Kyle Boller, running back Joe Igber, wide receiver LaShaun Ward, tight end Tom Swoboda, and defensive stalwarts Tully Banta-Cain, Jemeel Powell, and Nnamdi Asomugha.  Cal also had a brutal 13-game schedule in 2003, including games against four teams that would win their conference championship that season -- Kansas State (Big 12), Utah (Mountain West), Southern Mississippi (Conference USA), and USC (Pac-10).

But behind a quarterback named Aaron Rodgers -- you may have heard of him -- Cal gelled to become a formidable team by the time November rolled around.  The Bears stumbled to a 1-3 start with Rodgers and Reggie Robertson sharing snaps at quarterback, before Rodgers took over as the undisputed starter in Cal's fifth game, a win at Illinois.  Cal came into the game at Oregon having won four out of its last six, including the epic 34-31 triple overtime win against eventual AP national champion USC.  And in Cal's last two games leading up to the Oregon contest, Cal looked like it had turned the corner to becoming a very good team in blowout wins against Arizona at home (42-14) and Arizona State on the road (51-23).

Meanwhile, Oregon came into that November night's game with a 5-4 record and an identity crisis of sorts.  The Ducks had raced to a 4-0 start, including a road win at Mississippi State and a signature win at home against 4th-ranked Michigan.  But Oregon lost four of its next five, including some head scratching blowout losses: 55-16 at home to Washington State (which went 9-3 that year), 59-14 at Arizona State, and 42-10 at Washington. 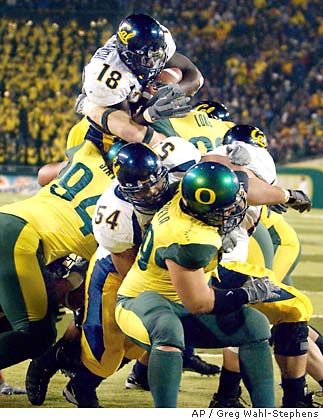 The expectation was that the game would have an offensive feel to it.  Cal was averaging 31 points per game coming into the contest, while Oregon was averaging 27 points per game.  Oregon had some big-play capability with Kellen Clemens at quarterback and formidable weapons Samie Parker and Demetrious Williams at wide receiver.  And Cal, of course, featured Rodgers, who was coming into his own as the starting quarterback: Rodgers would eventually throw for 2,903 yards and 19 TDs in 2003, despite starting only nine games. The Bears also had a capable running game, led by Adimchinobe Echemandu, who rushed for 1,195 yards and 13 TDs in 2003.

But the game turned out to be anything but an offensive showdown, as the defenses were the units that took charge.  Oregon held Echemandu to 65 yards on 24 carries, and held Rodgers to 188 yards passing.  The Bears' defense was equally formidable, yielding only 94 rushing yards (holding Oregon's starting running back Terrence Whitehead to 28 yards on 10 carries) and frustrating the Ducks' quarterback tandem (Clemens and Jason Fife) for most of the game.  So to the surprise of many, the game was a low-scoring affair, which Cal led 10-7 after three quarters of play.

It was strange enough that a game between these two capable offensive teams would be 10-7 going to the fourth quarter.  But then it got even stranger.  With 14:40 remaining in the 4th quarter, the lights suddenly went out at Autzen Stadium as Oregon ran a play deep inside its own territory.  Luckily for the Bears, they were able to find the ball carrier in the dark and make the tackle on the play.  But that would be the last play for a while.  The teams returned to their respective locker rooms to wait out a darkness delay.  After a 23-minute delay, the gremlins were driven out of the Autzen Stadium lighting system and the stadium lights were restored.

The delay did not appear to hurt the Bears.  On Cal's first possession after play resumed, Rodgers led the Bears on an eight-play, 56-yard drive, which culminated in a touchdown pass to tight end Garrett Cross on a 3rd-and-goal play at the Oregon 18-yard line.  The touchdown gave Cal a 17-7 lead with 10:07 remaining in regulation.  And when Oregon was forced to punt on its next possession, giving the ball back to the Bears with 9:00 remaining in the game, a casual observer watching the game on TBS with no rooting interest probably thought that Cal had this one won.  A 10-point lead in the 4th quarter with the way the offenses had struggled?  No way Oregon was going to come back, right?

Garrett Cross caught this touchdown pass on 3rd and goal from the Oregon 18-yard line.

But we gloom and doom Cal fans know better.  To a man and woman, we were probably all on edge.  And for good reason.

Between the time Rodgers threw the touchdown pass to Cross with 10:07 remaining and the time that Cal got the ball for the final time with 41 seconds left in the game, the Bears ran only six offensive plays and threw a grand total of zero passes.  After the Bears went three-and-out on three consecutive runs by Echemandu (including a run on 3rd and 12 at the Bears 31), Oregon began its comeback.  The Ducks quickly drove 66 yards for a touchdown, capping the drive on a deflating (for Cal fans) 31-yard pass play from Clemens to tight end Tim Day and trimming the Cal lead to 17-14.  Things got worse for the Bears on the ensuing kickoff, as an illegal block penalty on the return backed them up to their own 10-yard line as they began the next offensive series with 4:19 remaining.  Even worse yet, a false start penalty on first down pushed Cal back to the five-yard line, stirring the partisan quacker crowd to a frenzy.

From there, Cal played it close to the vest.  The Bears ran the ball with Echemandu three straight times, including on 3rd and 4 at the Cal 16-yard line.  The Bears did not get the first down, however, and they were forced to punt from deep in Cal territory.  Tyler Frederickson booted 40-yard punt, which Oregon's Justin Phinisee returned to the Cal 43 yard line, giving the Ducks excellent field position for a game-winning drive.

Oregon did not disappoint the Autzen Stadium faithful.  Just when it looked like the Cal defense might save the Bears' lead, Clemens found Williams for 20 yards on a 4th-and-3 to set Oregon up at the Cal 16-yard line.  Five plays later, Whitehead swept to the left corner of the end zone for a one-yard touchdown to put Oregon ahead 21-17 -- the Ducks' first lead of the game -- with 47 seconds left.

Cal's offense got the ball back at its 25-yard line with 41 seconds and no timeouts left.  Rodgers moved the Bears to the Oregon 33-yard line with completions to Cross and Burl Toler, but a miracle drive was not to be.  Rodgers' final pass of the game was intercepted at the Oregon 11-yard line with under 10 seconds remaining, and the Bears were forced to swallow a bitter defeat that put them on the brink of bowl elimination.

After the game, and for the first time in Coach Tedford's tenure, there was criticism about his play calling choices.  Cal fans and media questioned Tedford's conservative calls in the fourth quarter after the Bears had built the 17-7 lead.  The fact that Oregon's two touchdowns in the final 6:35 were enabled by the Bears' failure to generate first downs in two straight three-and-out possessions that featured six straight running plays did not sit well with many Cal fans who were looking for the Bears to put the game away.  The phrase, "played not to lose" might have been used more than once on the Cal message boards of the day.

Though the lights went out at Autzen that night, the lights did not go out on Cal's season.  The Bears circled the wagons and destroyed Washington 54-7 the following week.  Cal then won the Big Game 28-16 at Stanford to finish the regular season 7-6.  Cal would go on to win a 52-49 shootout in the Insight Bowl over Virginia Tech to finish the 2003 season with an 8-6 record, which gave the Bears momentum heading into the 2004 season.   (What happened that year anyway?  Anyone remember?)

2003 may have ended well for the Bears.  But after a strange night when the lights went out at Autzen, even the most sunshine pumpiest sunshine pumper had a sleepless night thinking about one that got away.

Please share in the comments your memories of the night the lights went out at Autzen, especially if you were in the stadium that night.