Moving Screen finally creates some separation between himself and the rest of the pack. 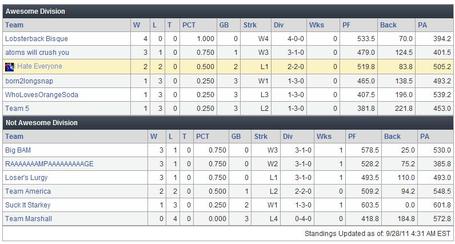 Team Starkey finally picks up a win, which is nice since his team is the highest scoring in the league. What abysmal luck there, you know? 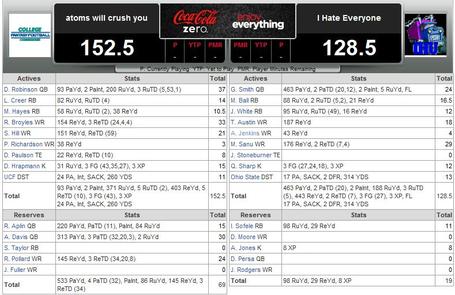 The Mack Truck was crushed by atoms will you crush you 152.5-128.5 behind the wizardry of Denard Robinson and Ryan Broyles. Geno Smith and Mohamed Sanu gave it their all in true Big East fashion, but then, we all know there's a reason the Big East is a dead conference walking. And Jake Stoneburner - totally getting the axe. Despite an awesome name. 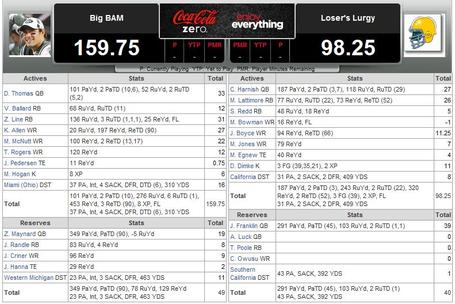 royrules' giddiness from having a nice fantasy football team was put out to pasture this past weekend, as Big BAM thumped Loser's Lurgy 159.75-98.25. Darron Thomas went off for 33 points and got 31 points of backup from Zach Line (as well as 27 from KA21)...though I'm not entirely certain about this Western Michigan/Miami of Ohio defense thing she's got going. Loser's Lurgy's top two performers were up to the task, but got nothing (including a -1 point performance) from any of its supporting cast. 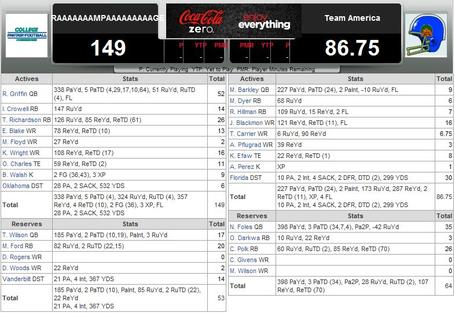 The blowouts continued with RAAMMMPPAAGGEE topping Team America 149-86.75 behind the golden arm of Robert Griffin III, the stylings of Trent Richardson, and a yeoman's performance from Isiah Crowell. That alone was enough to top the ineptitude on display from Matt Barkley, Michael Dyer, and others, though Justin Blackmon and the Florida defense gave it their all. 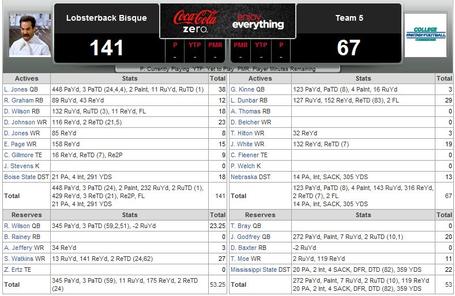 Team 5 is just a bye week at this point. Let's move on. 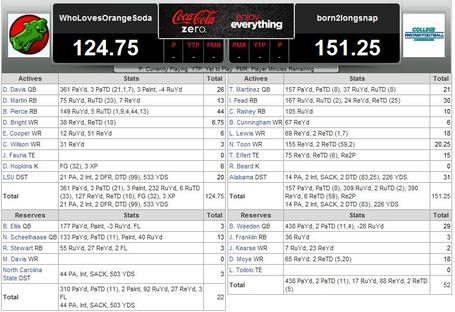 born2longsnap and WhoLovesOrangeSoda had something of a shootout, which saw born2longsnap defeat the Orange Soda lovers 151.25-124.75 behind T-Magic and Isaiah Pead. Nick Toon continued to vulture touchdowns from my Wisconsin dynamic duo of Montee Ball and James White, and they along with the Alabama defense overcame a huge day from Bernard Pierce and the LSU defense. 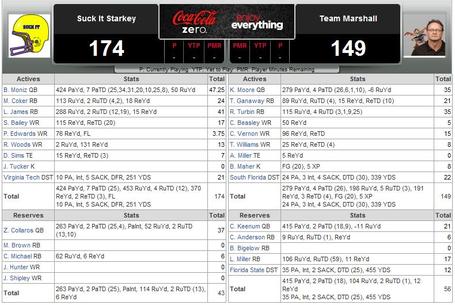 Fire Starkey finally figured out the key to victory - just score more than any single other team in the league, and you'll be guaranteed to win. That's what happened when they beat Team Marshall 174-149. Bryant Moniz went off for 47.25 points and LaMichael James' career day went for 41, as they were helped by the fact that Kellen Moore didn't bother playing into the fourth quarter of his game.