Unfortunately for the Bears, despite outgaining the Huskies 457 to 409 in total offense and enjoying the longest pass play in Cal football history, the shootout ended with the Cal offense shooting blanks in the red zone. When the Bears had one last red zone opportunity late in the fourth quarter -- a first and goal at the two yard line with a chance to tie the game -- they came up empty on four chances as Washington (3-1, 1-0 Pac-12) held on for a 31-23 victory in the Pac-12 opener for both teams.

The game certainly started out in promising fashion for the Bears (3-1, 0-1). After holding the Huskies to a punt on the first series of the game, it appeared that Cal would shoot itself in the foot when a poor shotgun snap by center Dominic Galas resulted in a loss of 14 yards and put the offense in a 2nd-and-24 hole at its own 6-yard line. But then -- BOOM!

On 3rd and 20, Cal dialed up its brotherly connection. Quarterback Zach Maynard found Keenan Allen up the middle and Allen did the rest, outrunning three Huskies to the end zone for a 90-yard touchdown. Just like that, Cal took a 7-0 lead on the longest pass play in Cal football history.

Was this the kind of day it would be?!?

Not exactly. While Cal fired the first salvo in the shootout, Washington quickly answered with a three-play, 66-yard drive, showing that the Huskies' offense would do its part to make it a shootout. UW quarterback Keith Price carved up the Cal defense on the last two plays of that drive -- a 44-yard strike to Devin Aguilar followed by a 20-yard touchdown pass to big tight end Austin Sefarian-Jenkins. And just like that, it was 7-7.

After the Huskies' first score, the game had the feel of one that would get away from the Bears. Cal went three-and-out and Washington again moved the ball down the field with ease, driving 65 yards effortlessly on a drive capped by two-yard touchdown run by Chris Polk to give the Huskies a 14-7 lead. And though Cal seemed to stem the tide with a 13-play, 68-yard drive on the next series, the Bears had to settle for a 29-yard field goal by Giorgio Tavecchio (more on this red zone theme later). When Washington answered that score with another seemingly easy touchdown drive--this one 78 yards on 9 plays, capped by another touchdown pass from Price to Sefarian-Jenkins--it was a 21-10 Huskies lead with 8:51 left in the first half.

But a funny thing happened on the way to Washington taking this game by the throat: Marvin Jones decided to show off his best Chris Carter impression. On the first play after the Washington touchdown, Maynard found Jones along the right sideline for a 16-yard gain in front of the Washington bench. Jones somehow got a foot down just inside the boundary and the catch was confirmed by replay. Then, after a Maynard-to-Allen connection on 3rd and 10 kept the drive going, Jones again did some toe tapping. Jones hauled in a 15-yard completion along the left sideline, barely tapping his toe inbounds and cradling the football to complete the catch at the Husky 21-yard line. Replay overturned the incomplete call on the field, and Cal was in business. Once again, though, the drive stalled after Cal got into the red zone and the Bears settled for a 36-yard Tavecchio field goal.

This time, though, the Bears did not give up the momentum after scoring. On the next series, Cecil Whiteside forced a fumble by a scrambling Price. Mychal Kendricks recovered, and Cal was set up in Washington territory to try and shave the lead further before halftime. This time, the Bears cashed in for seven points instead of three. Along the way, Maynard found Allen a on 4th-and-4 (one play after Allen dropped a sure touchdown pass) and then hit newly minted out-of-the-backfield threat Covaughn DeBoskie-Johnson for a 15-yard completion to the Washington five-yard line. C.J. Anderson bulled into the end zone three plays later, and Cal would find itself down by only 21-20 at halftime, with the knowledge that it would get the ball to start the second half.

But what started so well ended with a whimper. On first down from the five, Maynard fumbled when the ball slipped out of his hand trying to throw a pass. Luckily for the Bears, Maynard recovered. But Cal lost seven yards on the play and lost its offensive rhythm it had prior to that play. Cal once again settled for a red zone field goal, which Tavecchio converted. Cal kept the ball for 7:03 and had the lead -- but it was only 23-21.

Cal would not score again.

Washington took the lead back on the very next series, getting a 40-yard field goal from Erik Folk to go ahead 24-23 late in the third quarter. And on the Huskies' first possession of the fourth quarter, the Huskies gave the Bears a firm punch the gut. In a turn of events reminiscent of the Colorado game, Price found Polk wide open out of the backfield for a 70-yard touchdown on a 3rd and 12 play. Washington suddenly had a 31-23 lead and the momentum the Bears looked like they had seized at the start of the second half was but a distant memory. 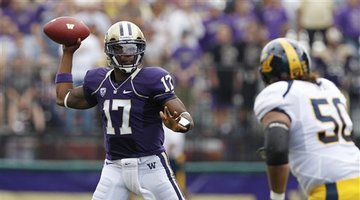 Keith Price frustrated the Bears, completing 19 of 25 passes for 292 yards and 3 TD -- and adroitly avoiding sacks, for the most part.

The Cal offense sputtered for much of the fourth quarter, but Washington couldn't quite put the Bears away. Just when it looked like Washington would milk clock, Cal safety D.J. Campbell forced a fumble by Sefarian-Jenkins, which Sean Cattouse recovered at the Cal 38. Cal had some life. But the Bears could not take advantage and turned the ball over on downs when Sofele dropped a fourth-down pass from Maynard that would have given Cal a first down inside the Washington 35-yard line.

But Washington still could not put the Bears away. The Huskies punted the ball back to the Bears, who took over at their own 13-yard line with 4:19 remaining in regulation. From there, Cal embarked on a drive that was equal parts gutsy and maddening for Cal fans. On the gutsy side of the ledger, Coach Tedford decided to go for it on 4th and 3 at the Bears' own 20 yard line with 3:49 and two timeouts left. Maynard found Allen for a 17-yard gain and the Bears were alive. And they stayed very much alive, as Maynard converted two more third downs with passes to Allen. And then, with 43 seconds left, Maynard hit Allen again for what would be the last of Allen's 10 catches for 197 yards -- a 19-yard completion that gave Cal a first-and-goal at the Washington 2-yard line.

And this was where the story ended badly and sadly -- and with many Bears fans wondering about the choices Cal made on the last four plays of the game:

* 1st and goal at the UW 2: Maynard throws incomplete to Anthony Miller, on a play where Miller tried to sneak out the left side when the flow of the play went to the right. Miller could not get a clean release from the line of scrimmage.

* 4th and goal at the UW 2: Maynard throws a fade to Allen to the left corner of the end zone....incomplete.

And with that, the Bears were done. Maynard's 349 passing yards (the most by a Cal quarterback since Kevin Riley's 351 against Arizona State in 2009), Allen's 197 receiving yards, the longest pass play in Cal football history, Jones' amazing tiptoe catches, Sofele's solid day running, Tavecchio's perfect day kicking FGs and PATs, and the Bears' clutch fourth-down conversions became but a footnote to a heartbreaking third straight loss to Washington.

Cal will have extra time to think about this one. The bye week comes up before Cal goes on the road for an even bigger test at Oregon on Thursday, October 6.