There's a nine way tie for eighth, and I don't feel like that's all that significant of an accomplishment for all of them to be listed there. Bully for them. Meanwhile, Let Tiny Loose! has fallen from first to third! In my best Stuart Scott voice...wha...what had happened? 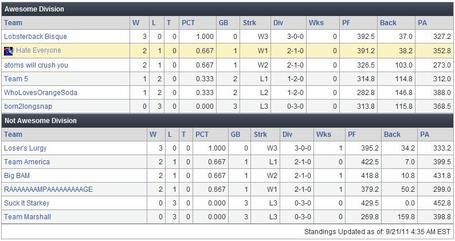 ]
Poor Suck it Starkey. Highest scorer in the league, not a single win to show for it. It's like he's the college football version of the Golden StateWarriors. 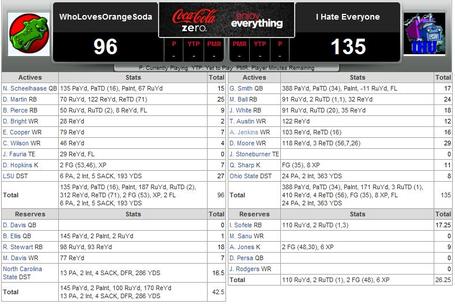 DOMINATION! Though I'm still waiting for Geno to come around. Not sure he'll manage to do that this weekend against the LSU defense, but between him, the Wisconsin dynamic duo of Montee Ball and James White, and D. Moore (who I think I picked up off waivers since my man Mohamed Sanu is on a bye week), that was more than enough for I Hate Everyone to crush WhoLovesOrangeSoda 135-96. Take that, Doug Martin! 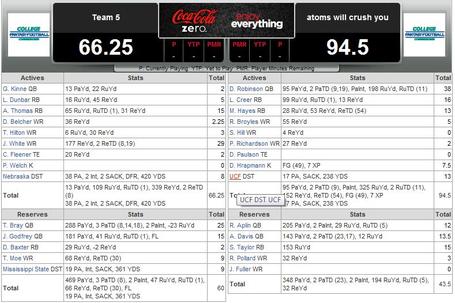 The slapfight of the week featured atoms will crush you beating Team 5 94.5-66.25 behind another superlative effort from Denard Robinson. Paul Richardson only managed 27 receiving yards, which makes me kinda wonder about the Cal defense...on the plus side, Coby Fleener was injured. There's the inner Eagles fan in me speaking again. 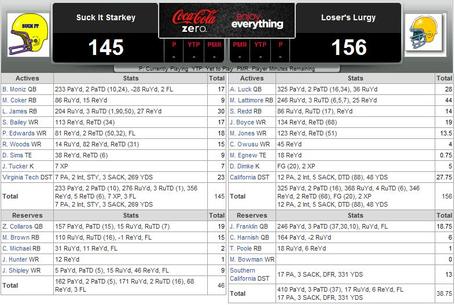 Loser's Lurgy put another depressing week on Suck It Starkey, as he again lost to the week's highest scorer by a count of 156-145. Andrew Luck, Marcus Lattimore, and the Cal defense (I thought I pick in weak opponent adjustments, but I guess not) put a hurting on to overcome strong efforts from Bryant Moniz, LaMichael James, and the Virginia Tech defense. 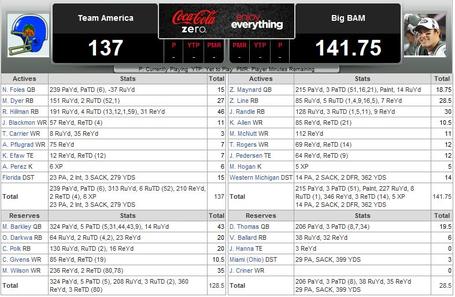 Big BAM slipped by Team America 141.75-137 behind, well, a bunch of guys whose names I don't know. Z. Line? J. Randle? Who knew Jerome Randle came back to college as a running back? And a good one, at that. Team America actually had quite the strong effort on its bench...a substitution of Marques Wilson in there would have resulted in them being the highest scorer of the week. 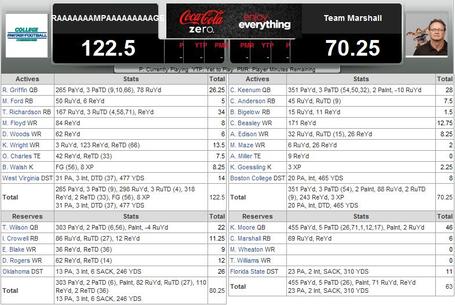 RAAAMMPPAAAGGEEE put a hurting on Team Marshall 122.5-70.25, although that's not much of an accomplishment. Case Keenum accounted for 28 of Team Marshall's 70.25 points, meaning the other eight roster positions accounted for an average of less than six points each. Yeesh. Robert Griffin, Trent Richardson, and the West Virginia defense were most of the way there themselves. 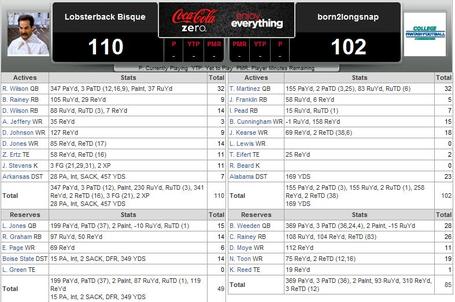 Russell Wilson and Taylor Martinez fought to a standoff as Wilson had slightly more support to help Lobsterback Bisque triumph over born2longsnap 110-102. The key was that, well, born2longsnap got a grand total of 2 points from its WR3, TE, and kicker. It pays to watch your roster, kids. Especially when you have a reasonably productive bench.