Share All sharing options for: Cal's athletic department answers our questions about the online stream of the Cal-Presbyterian game 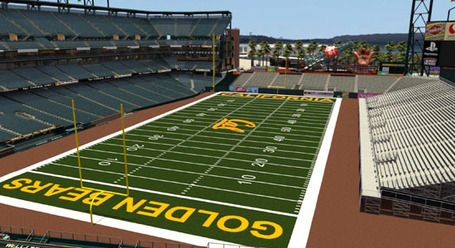 On Monday, it was reported that Saturday's Cal football game against Presbyterian would be streamed live on calbears.com's All Access page. That was great news for those of us who cannot watch the game in person at AT&T Park. But many of our readers were wondering why Cal was charging $7.95 for a viewer to access the online stream. "Why can't we watch the game for free?" seemed to be the prevailing theme.

So we (the CGB Marshawnthusiasts, Jahvidticians, Folletarians, and Hit Squadians) put together some questions to ask the Cal athletic department about this issue. Then, through our ambassador Kodiak, we posed those questions to Matt Terwilliger, Cal's Associate Athletic Director--Business Development.

On what TV options were considered and Cal's decision to do a live stream:

We knew along this game would probably not be picked up by the Pac-12 tv arrangements, but continued to pursue more regional and local options to get game on tv. When we came within a couple of weeks of the game, we knew it was time to move to an online option. This did require a waiver from ESPN and Fox, because we can not put a competing game within their tv windows without approval whether on local tv or online.

On the cost of producing a stream of the game:

The cost of the stream is a contractual arrangement with our web site provider tied to the cost of maintaining the site annually and revenue share opportunities. There are also additional expenses incurred, such as a couple more staff and cameras typically provided by the tv production crew when a game is televised. I assure you this is not a way to make money for anyone involved, but more of an opportunity to make sure our fans have access to watch the game and provide exposure to the team. We know there are a lot of fans anxious to watch the game from outside the area and we want to provide that opportunity at the lowest cost we can.

We tried to keep the cost as low as we could and made it the equivalent of a 1 month subscription ($7.95) to the All Access video platform. OSU and WSU both charged for games earlier this year. I believe Utah was able to not charge for a game because of a prior contractual arrangement with their web and tv partner, but I would suspect that will change in the future. Many schools have to charge for live events because of their web/tv contracts and costs associated with operations. I've seen some charge as high as $34.95 this past weekend.