When CalBear81 revealed the contents of the 1920 Big Game program, it got me thinking.  And that's always a dangerous proposition for me, so I tried to keep it to a minimum.  But during my brief foray into intelligence, I remembered that NorCalNick let me borrow his copy of the 1911 California songbook "California Songs."  This was about a year or so ago, but given my sheer laziness, I had failed to return it.

So, one Sunday morning, I took to scanning in this historic document.  We're focused here at CGB at helping promote Cal history.  Part of that includes working hard to disseminate historic Cal documents, be they football programs, yearbooks, or songbooks.  So, with a modicum of further ado, let's take a quick tour through California Songs.  There will be a link on the sidebar and you can see the full thing here.  Enjoy! 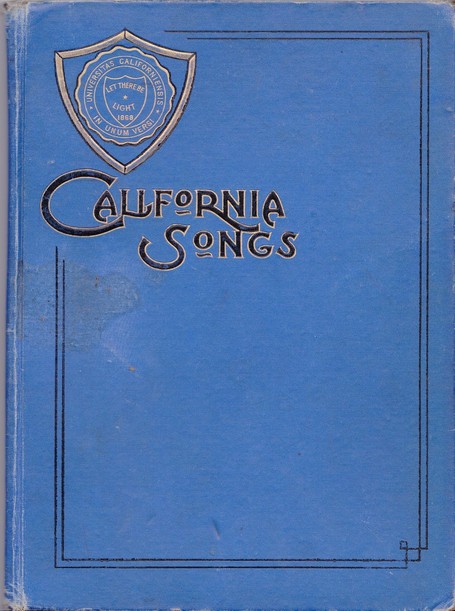 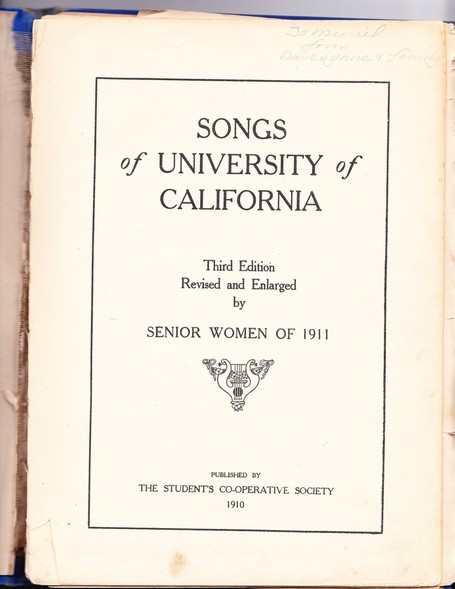 As much as things change, they often stay the same.  While many of the songs in the book are no longer popular, some still are.   For example, here is Sons Of California: 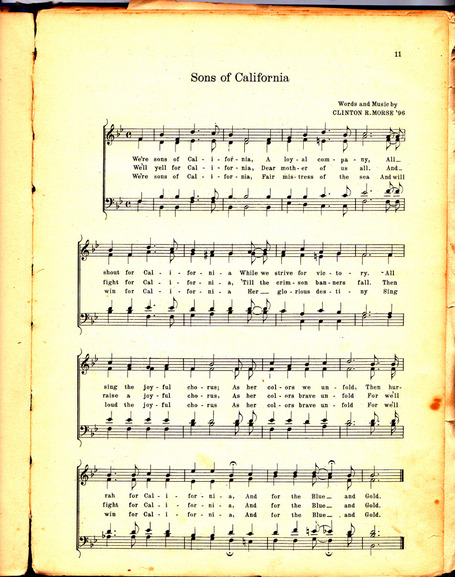 It is always interesting to think of somebody who is a '96 graduate, but really graduated in *18*96.  This book is 100 years old now, so many of the songs that we take for granted as spirit standards were in their infancy then.  Songs like Hail To California! 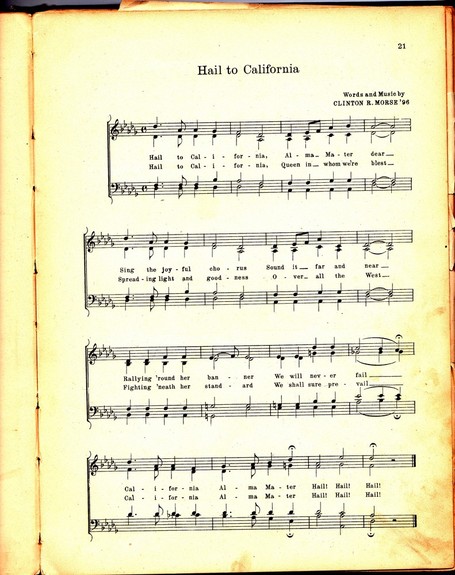 I think the song written by the oldest alum is California!  Hail To Thee!  It was written by S.B. Christy, who apparently graduated in 1874.  That was only a handful of years after Cal was even created! 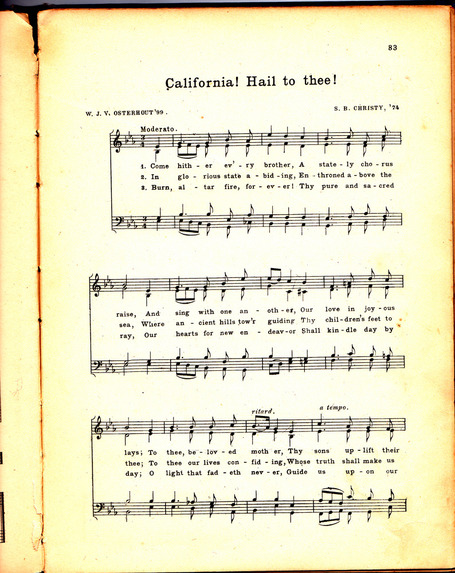 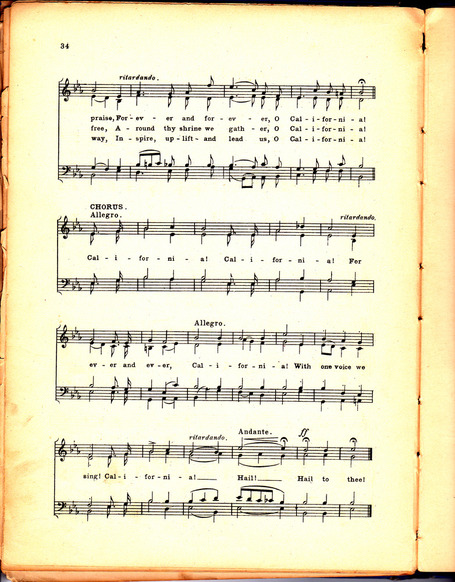 Not all the songs were Cal spirit songs.  For example, here is what appears to be a love song: 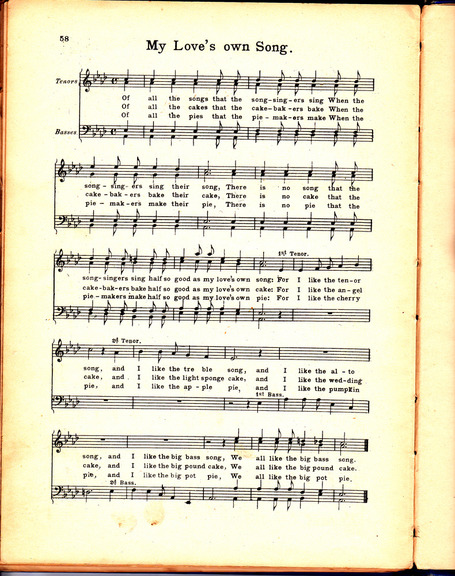 At the end of the book, there are a few pages of yells.  For example, here is Palms Of Victory, a song that the band newmen in 2001 never knew: 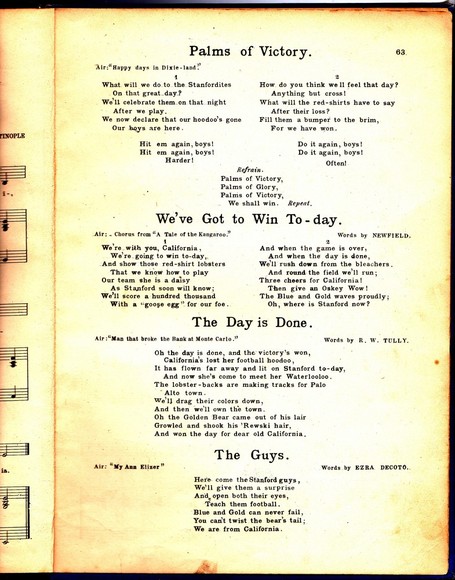 And here is Fight For California: 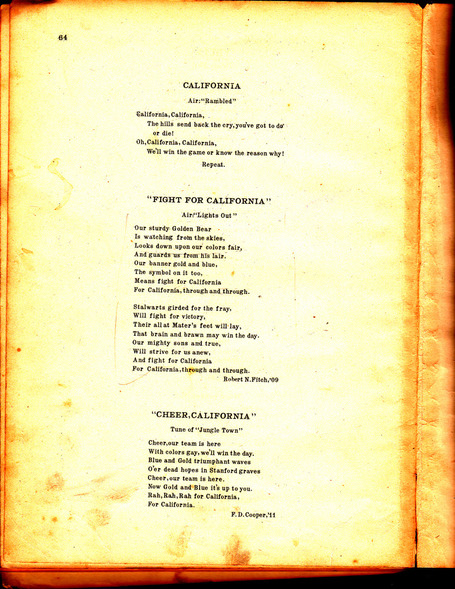 They only have the Fight For California lyrics here.  However, Wikipedia notes that at this time, the music did exist:

Fight for California is the official fight song of the University of California, Berkeley. The tune is a march and is from the "trio" or final strain of the Lights Out March written by Earl Elleson McCoy in 1906. The lyrics were written by Robert N. Fitch of the class of 1909.

What is most impressive about this is how it reflects the traditions of Cal spirit.  I know that Cal is not unique in that way, but that is what makes college athletics so special to me.  Today, we sing the same songs that they were singing 100 years ago.  Back then, they might not have the emotional attachment that they do today.

But everything has to start somewhere.  So, I hope you guys enjoyed this.  You can see the entire songbook (60+ pages) in the SCRIBD link above.  Enjoy!  GO BEARS!