Tomorrow marks the induction day for the 2011 class of the Pro Football Hall of Fame.  Seven new members will be enshrined in Canton, a list that includes contemporary greats in Marshall Faulk, Deion Sanders, Shannon Sharpe, and Richard Dent.   But also included in the Hall of Fame Class of 2011 is the late Leslie Alan "Les" Richter, who was an outstanding player for Cal in the Pappy Waldorf era.   And with Richter's ensrhinement, the Cal football program's long wait is over: Mr. Richter is the first Cal football alumnus to be inducted into the Pro Football Hall of Fame. 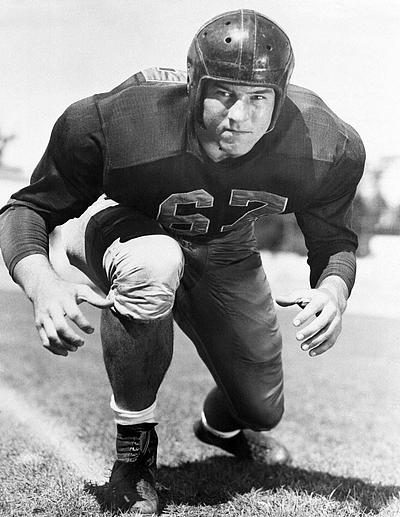 Though it took awhile for Mr. Richter to get the honor, it should really come as no surprise that he is being enshrined in Canton.  His career accomplishments as a professional football player are certainly worthy of enshrinement.  During his nine outstanding seasons as a linebacker for the Los Angeles Rams, Mr. Richter proved himself not only as one of the stalwarts of the Rams' defense, he proved himself consistently as one of the best defensive players in the National Football League. 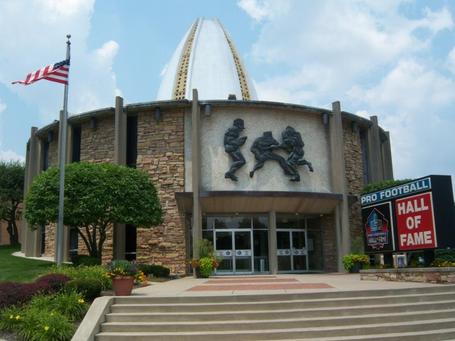 Don't take my word for that.  Look at what these prominent pro football people had to say about Mr. Richter's induction to Canton.

Les was a tough, hard-nosed football player who gave it his all on every play and in every practice. He knocked the hell out of people. I mean, he'd really hit you. Les Richter was a great teammate." - Hall of Famer Deacon Jones

“It’s always puzzled me why Les was not in the Hall of Fame. He was a great, great player. I don’t know any linebacker in that era who even compared to him. He’s the kind of guy that was hard to overlook. He was big, he was fast, and he was an extremely productive player. When you prepared to play the Rams, Les was the guy that you really game planned for. He was their defense. He was successful in business, he was successful in life and was a great person.” - Hall of Famer Frank Gifford, who competed against Richter in high school, college and the NFL

“Les has been deserving of the Hall of Fame for quite some time, and I’m thrilled to see him receive this honor. Les was one of the pioneers of the middle linebacker position. Before Sid Gillman started throwing the football around, the NFL was all run game, and most teams played a 5-2 front. Les was one of the first true middle linebackers who could defend the run and the pass. He was an All-Pro and was the best in the business for a number of years. You talk about smart, he was the valedictorian at Cal, and calling the signals on the field and making the adjustments, that all went along with kind of establishing a new position. Les was a new breed of middle linebacker, which was part lineman and part defensive back. He could really cover, and that was the difference between him and the group in front of him.” - Jack Pardee, former NFL head coach and former Richter teammate

Though Richter played his entire career for the Rams, he didn't technically start out as a Ram.  Mr. Richter was actually drafted out of Cal by the NFL's New York Yanks with the second overall pick in the 1952 NFL Draft.  When the Yanks franchise folded after the draft, Richter's rights were granted to the expansion (and ultimately short-lived) Dallas Texans franchise.  But the Rams were determined to get him.  The Rams traded 11 players to the Texans to obtain Mr. Richter's rights, in what remains the largest deal in pro football history for a single player.  (That is not a typo.  The Rams traded 11 players for Richter.  Eleven.)  It was a trade that worked out well for the Rams and for Richter.  For Richter, it meant playing for one of the NFL's marquee franchises instead of the expansion Dallas franchise, which lasted only one season.  (The Dallas Cowboys they were not!)  As for the Rams, they got a mainstay at linebacker.

Richter in action as a Los Angeles Ram.

Richter delayed the start of pro career, serving two years in Korea as a lieutenant in the United States Army.  But when he returned stateside to join the Rams for the 1954 season, he immediately made an impact in his new profession.  Richter began his pro career as a placekicker and linebacker.  As a kicker, Richter was 106 of 109 on extra points and 29 of 55 on field goals in his career, amassing 193 points.  But he is not in the Hall of Fame for his kicking: he is in the Hall of Fame because he was one of the best defensive players in the game during his heyday with the Rams.    Known for his "rugged, punishing style of play" (to borrow the words of his Pro Football Hall of Fame bio), Mr. Richter was as good as he was tough.  The Pro Football Hall of Fame summarizes succinctly the greatness of his pro career:

Richter was selected to eight straight Pro Bowls. The only time he did not receive the honor was in his final season in 1962. He was also named a first- or second-team All-NFL each season during a six-year span from 1955 to 1960. Aside from his play at linebacker, Richter also saw some time at center and handled the Rams placekicking duties early in his career. He received much attention in 1955 for his play on defense as well as clutch placekicking that helped the Rams to an 8-3-1 record to win the NFL Western Division crown and a berth in the championship game.

Richter recorded 16 career interceptions which he returned for 206 yards. Twice he had four picks in a season (1957 and 1961) and was the Rams leading interceptor in 1957. Richter battled through various injuries but never missed a game during his 112-game NFL career. In fact, early in the 1961 season he suffered a broken cheekbone during a game against the Pittsburgh Steelers. He played through the injury not initially knowing it was broken. He had a protective guard added to his helmet and completed the season even though he broke his cheekbone again five weeks later.

Before he was an all-time great pro football player, Richter was a star football player at Fresno High School before attending Cal, where he became an All-American under legendary Cal coach Pappy Waldorf.  Richter played offensive line, linebacker, and kicker for Pappy's Boys.   Richter was a consensus All-American at guard in both 1950 and 1951 and, as a kicker, kicked 40 PATs in 1951 to set a Pacific Coast Conference record.  Not only was Richter an individual talent for the Bears, he was also a difference maker on winning teams: during his Cal career from 1949 to 1951, Richter's teams went 10-1,  9-1-1, and 8-2.  The lone loss in both the 1949 and 1950 seasons were in the Rose Bowl to Ohio State and Michigan, respectively.  And though Richter's senior-year team in 1951 did not get to play in a bowl game, Cal finished the year ranked 19th in the country. 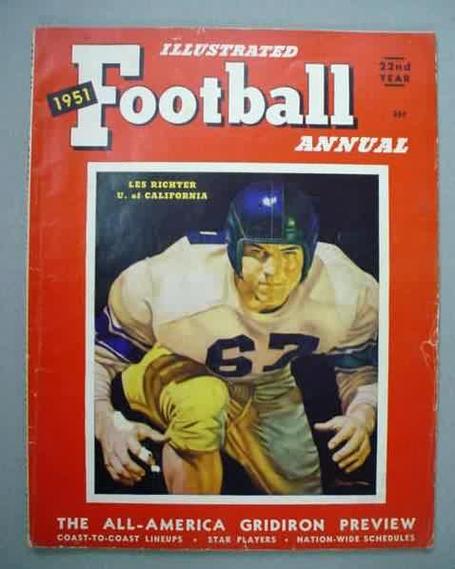 Richter was on the cover of this 1951 college football annual preview magazine.

Richter's on-field accomplishments made him a member of the Cal Athletic Hall of Fame and the National Football Foundation College Football Hall of Fame.  But Richter was not only a talented football player for the Bears.  Richter also played rugby at Cal and was a star in the classroom: Richter graduated with a degree in business administration and was the valedictorian of his Cal graduating class. 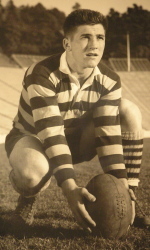 In addition to being a football star, Les Richter captained the Cal rugby team.

When Mr. Richter is officially inducted into the Pro Football Hall of Fame tomorrow, it will not be the first professional sports hall of fame in which he has been enshrined.  Mr. Richter is already a member of the Motorsports Hall of Fame, where he was inducted in 2009 for his distinguished career in auto racing.   In a long and distinguished career in the racing industry, Mr. Richter was president of the Riverside Raceway, a vice president of NASCAR, and a vice president of the California Speedway at Fontana.  Richter made significant contributions to his adopted sport of auto racing.

Les Richter died on June 12, 2010 at the age of 79.  Though it is a shame that Mr. Richter is not alive to see his well deserved induction to Canton, the mark he made as a  Cal Bear and a professional football player should not be forgotten.  Congratulations, to Les Richter and his family on this honor.