We looked at the first portion of Cal Fan Appreciation Day photos in Part 1.  We saw that Keenan Allen is very popular.  We saw that Viliami Moala is very big.  We saw that many football players like to wear socks with sandals.  And now we get to see the Man, the Myth, the (M)Legend, Coach M! 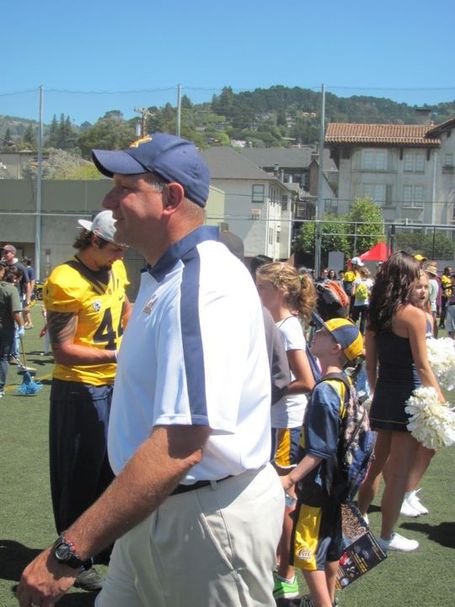 After the jump, let's finish up all the action at the Cal fanfest in 2011.  GO BEARS! 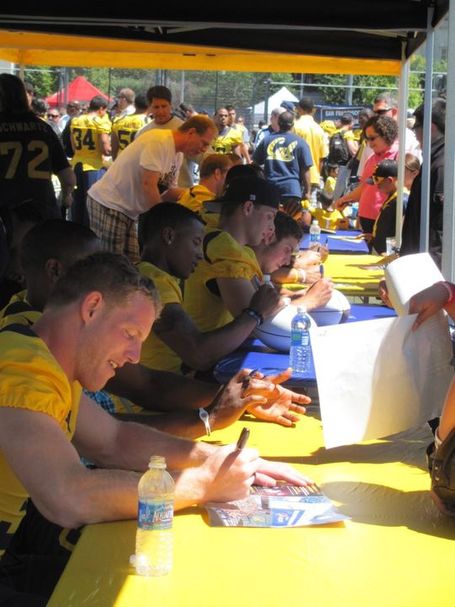 They used to have tables for the "big name" players at Cal along with the seniors tables.  Then, a year or so ago, they just changed it to Seniors Offense and Seniors Defense.  I think that is more fair.  Maybe certain players felt upset at not being at a table.  So, while the juniors, sophmores, and freshmen randomly roam the grounds, the seniors get to sit at a table with a cooling tent above.  People line up to get their autographs and chat briefly with the players as they move along.  Here are some of the players from the offense table.  Here is Marvin Jones: 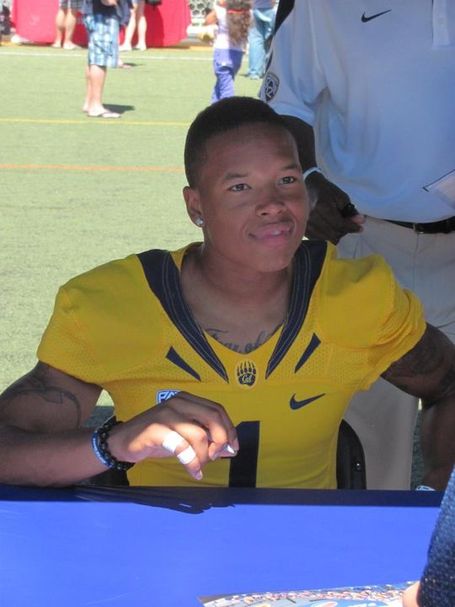 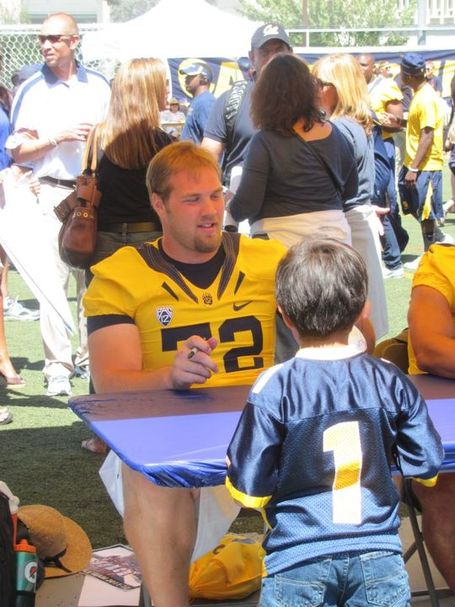 Anthony Miller and Will Kapp: 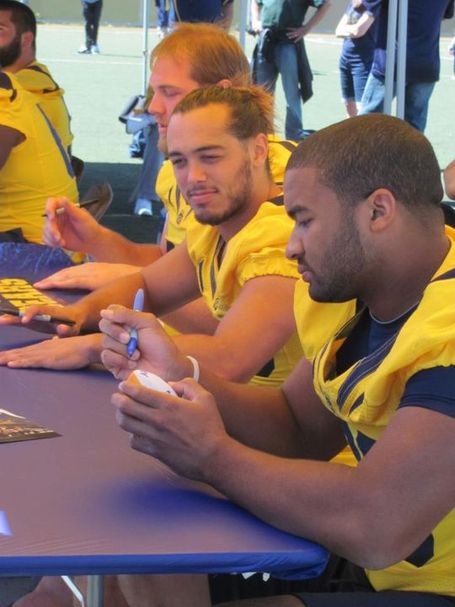 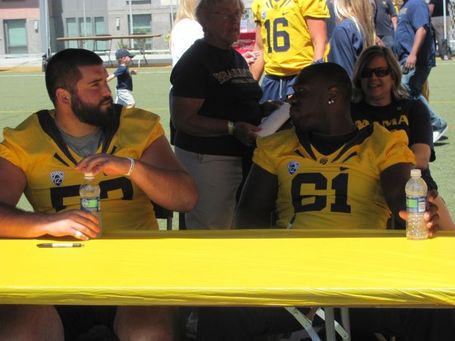 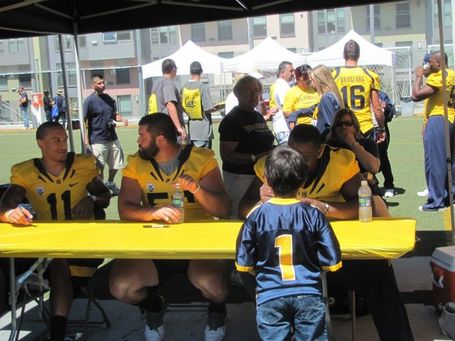 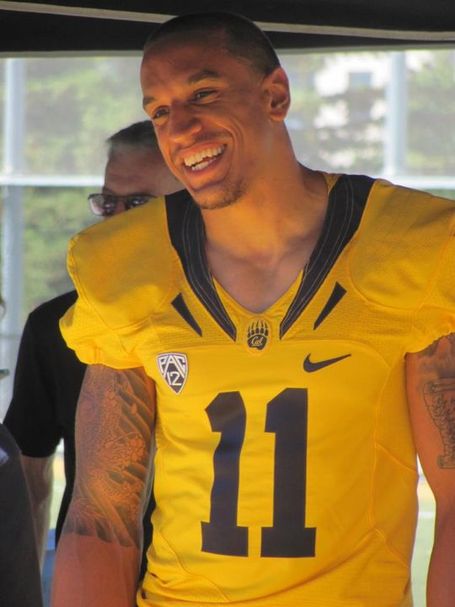 Here are some players from the defensive table.  This is Mychal Kendricks.  I have a question about Mychal Kendricks' name.  It is spelled "Mychal" but pronounced like "Michael."  I think that is pretty cool.  My question is can that be shortened to Mike?  Would it be "Mych"?  Then, would that have a hard K sound like in "Mike" or a "ch" sound?  These are the fairly idiotic things I think about. 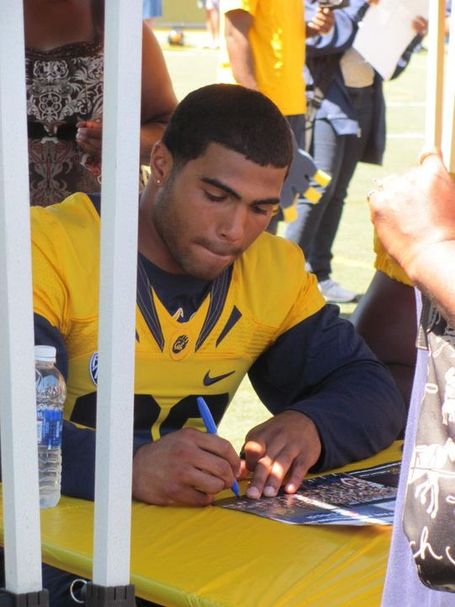 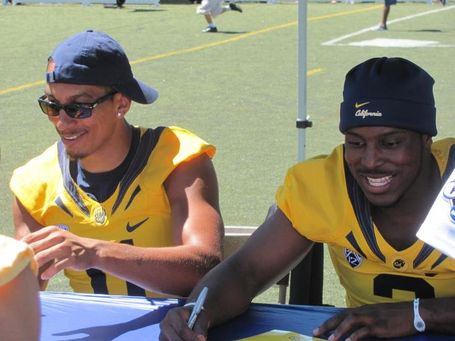 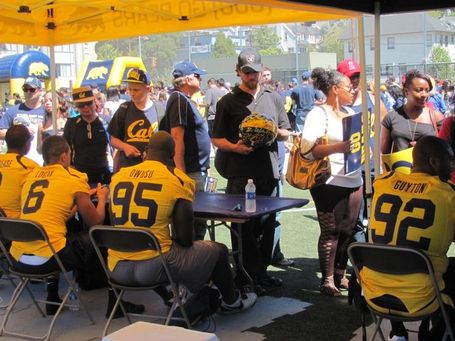 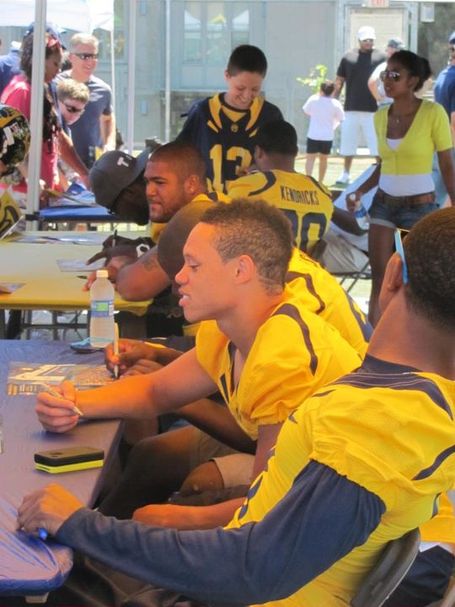 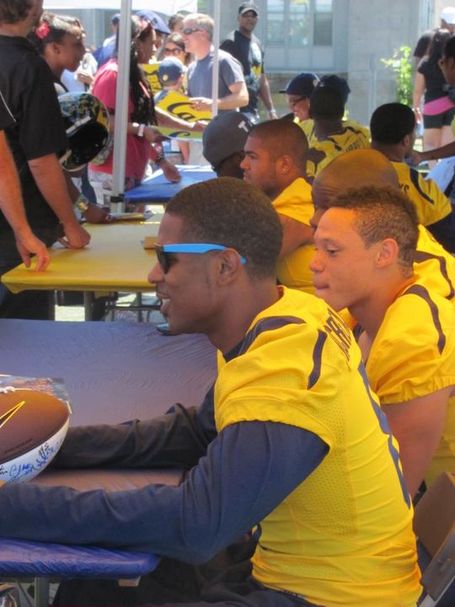 Isi Sofele was hanging out behind the defensive table.  I know some people have concerns about his size, but what I love about his running style is that his legs never stop.  Marshawn had (has) that, also.  I think we have a lot of talent at RB and am excited about that position in the season: 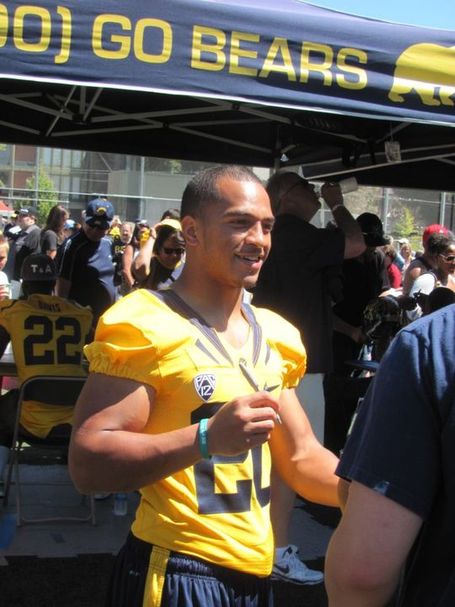 Here's Dan Camporeale, proving once again that the best part of Acalanes High School is Campo! 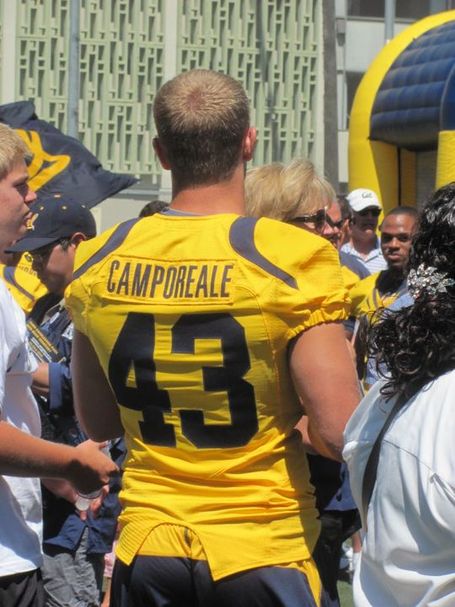 Geoff Gibson, who I noted in the first post is a big offensive lineman.  Hopefully a name to know in the future! 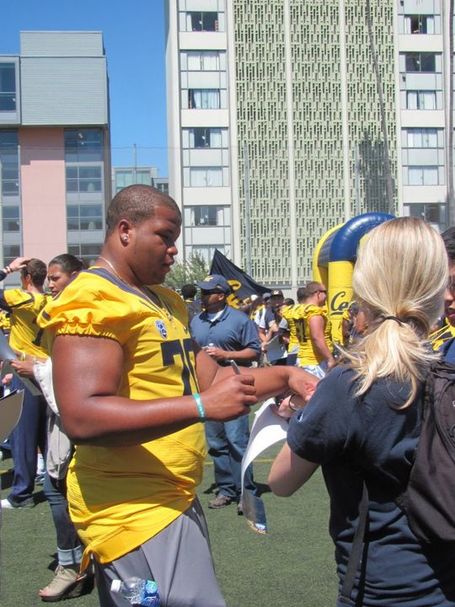 Marc Anthony, who, like Zach Maynard, was not wearing a Cal hat.  But its OK.  We had a good discussion regarding the Cal-Oregon game last year.  My friends were having such an impressive/serious football-related discussion with him.  That is so weird, because I usually just have the stupidest most inane jokey jokey conversations with the players.  I always approach the players as just dudes, I forget that they have this whole other aspect, which is the intense nitty gritty football aspect.  Kind of interesting to me to hear that in depth conversation.  It was kind of like watching a HydroTech analysis post play out in real life! 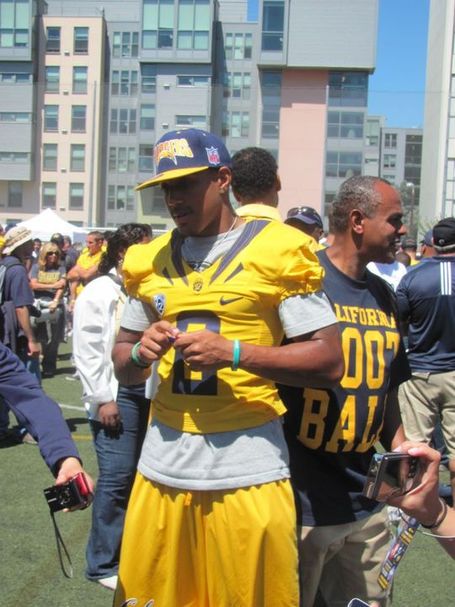 Coach Gould!  I didn't really hear what he was saying, but I heard his raspy voice.  He always has that raspy voice.  He must be inspiring his young charges a lot to wear out his voice like that! 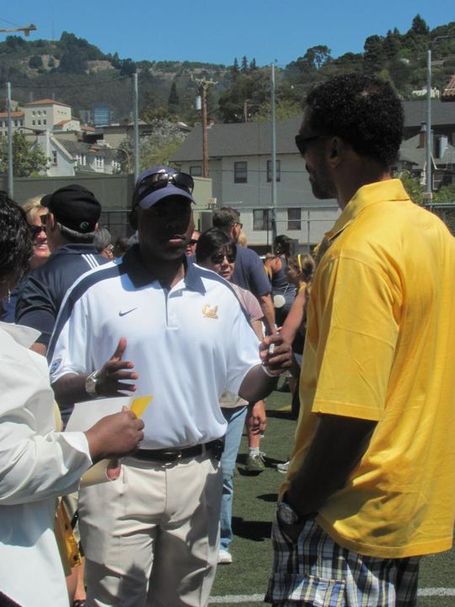 Since I am so courteous of other's opinions and not wanting to stress people out about a potential chat and cut, I would stay like 5 feet away from my friends if they were in line and yell conversations back and forth.  "YOU SHOULD TELL MICHAEL CALVIN THAT HE LOOKS BETTER WITH THE SHAVED HEAD!"  "ARE YOU GOING TO THE TEDFORD LINE AFTER THIS????"

Then again, perhaps those around us would have rather I just did a chat and cut over that! 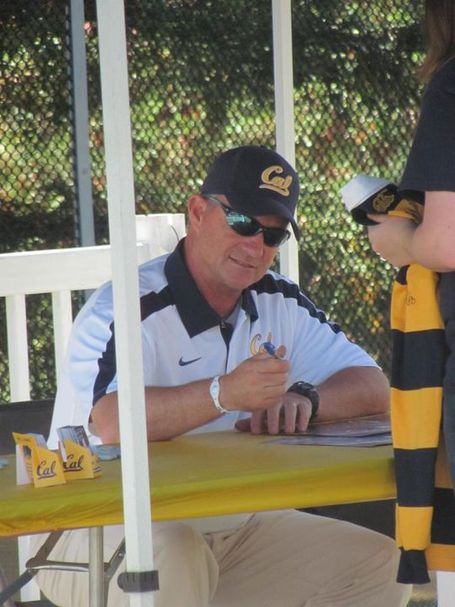 This is Chris McCain.  He is a freshman from North Carolina.  I'm loving this NC pipeline in recruiting.  Guy is 6'6".  I think he might be the tallest player on the team. 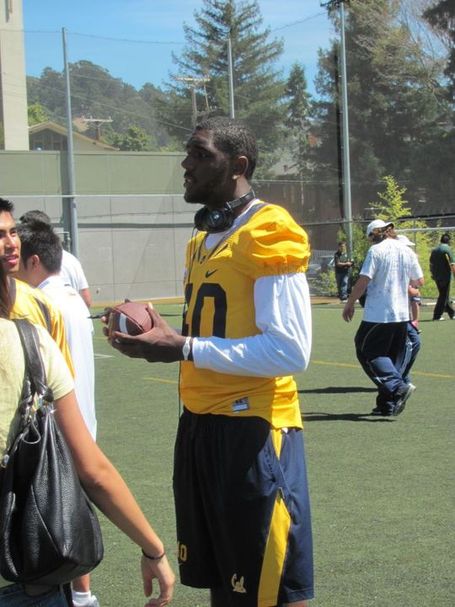 Although another player at 6'6" is Scott Bueno, local guy from Livermore. 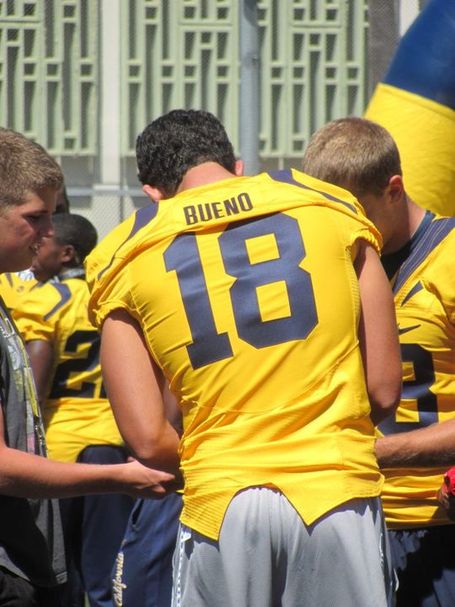 As we were leaving, we walked by Tiny, who as you all remember from Part 1 is HUGE. 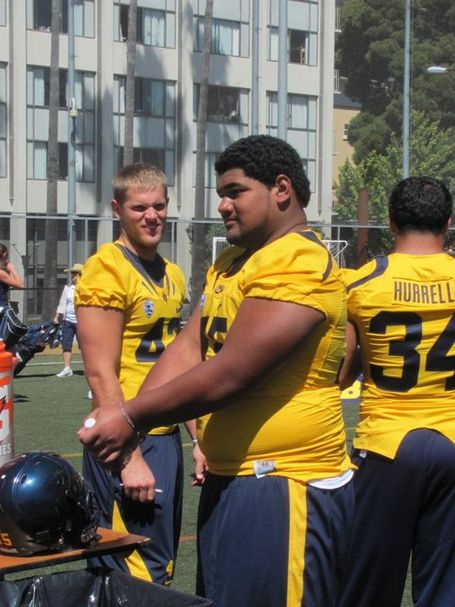 He was getting ready to take a photo with other players on the team: 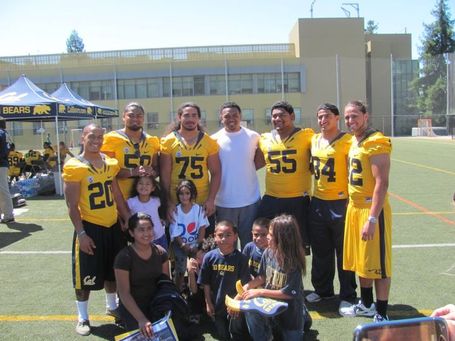 And, thus, ended the Fan Appreciation Day in 2011.  Fun times had by all!  Good to chat with the players, see who is unbelievably massive and find out who the best dancer on the team is.  Is there anything Keenan Allen *can't* do???

As we were leaving I saw this promotional car for Pepsi Max.  Maybe it's just me, but I'm looking more for something with Zero Calories and Minimum Pepsi Taste.  I'd go for Cal Max, though.  Zero Calories and Maximum Cal Taste!  GO BEARS! 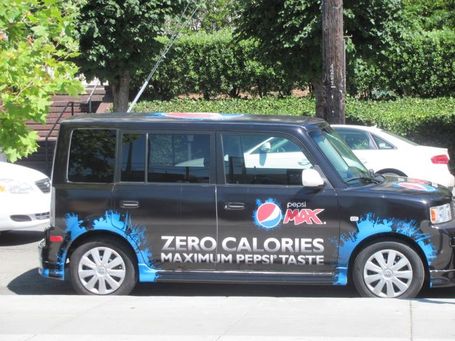