Dodging A Bullet? Arizona Football In 2011

Share All sharing options for: Dodging A Bullet? Arizona Football In 2011

TwistNHook: We don't even play these guys. Unless we make the Pac-12 Championship game and they do, too. But we should still talk about them, because our Pac-12 North opponents will be facing them. They had the hype in the last few years, but with ASU getting all the hype this year, Zona has sort of been forgotten. So, what should we expect of the Wildcats? What is even the chance that we might face them????

Berkelium97: I hope we go undefeated and face Arizona in the Pac-12 Championship game. If we do, we will become the first (and last) team ever to defeat all eleven Pac-12 opponents in a single season. How's that for a fun fact!

OhioBear: Since we don't face them this year, I have a hard time mustering any thoughts about them. I'm inclined to think they should be dangerous in the Pac-12 South because of the experience they have at QB with Nick Foles. But with the way they faded down the stretch last season reminded me of Cal 2007. So I'm not sure what to expect of them.

At least one person thinks that they'll be in the Pac-12 championship game, though. Didn't Zona get one 1st place vote in the preseason media poll?

Berkelium97: Several years ago Arizona was known as a giant-killer in November. In 2005 they destroyed the 7th-ranked Bruins in a 52-14 disaster. As we all painfully remember, they defeated the Bears in 2006. The next year, both Dennis Dixon's knee and Oregon's National Championship dreams crumpled in Tuscon.

Since then, they are 3-8 in the month of November. In '09 the Wildcats flirted with the Rose Bowl before losses to Cal and Oregon ended those dreams. Even though they bounced back with victories over ASU and USC, the disheartened 'Cats were then dismantled by Nebraska in the Holiday Bowl. Last year, their top-15 ranking came to a horrific end as they gave up an average of 36 points per game in five consecutive losses to end the season.


Though they return several players in the secondary and at linebacker, they obviously did not have a dominant defense last year. Most troubling for the Wildcats is the loss of defensive ends Brooks Reed, Ricky Elmore, and D'Aundre Reed to the NFL Draft. That trio combined for 19.5 sacks last season and they were pivotal in a huge win over Iowa.

The offense is highlighted by Nick Foles and Juron Criner, but Arizona has plenty of holes to fill on offense. The Wildcats have to replace all five starters on offensive line. Their first-team tight end only caught four passes last season and is a far cry from the dominance we saw with Gronkowski a few years ago. Keola Antolin should be serviceable as the 'Cats' top running back, though he is capable of having breakout games as he demonstrated against Bears in '08.

Despite having one of the best QB-receiver tandems in the nation, Arizona has plenty to be concerned about this season. While they are not as bad as Colorado or UCLA, they would be fortunate to finish in the top half of the Pac-12 South. A fourth place finish for them seems almost inevitable.

TwistNHook: So, basically, I wish we woulda faced them. We're dodging a bad team. That's not good! While Berkelium97 did a great job outlining some of the problems on offense, they also have problems on defense. We remember that they held Cal's offense down in last year's frustrating loss. However, a lot of

that talent has left and there are holes to fill, too, on D:

The defensive scheme runs out of multiple 4-3 sets and relies on getting pressure on opposing offenses from just about anywhere. Arizona ranked fourth in conference and 41st nationally in allowing 22.7 points a game in 2010.

Plenty of holes have been left by the departures of defensive end and NFL draft picks. Optimism picked up a bit during the squad’s spring game, as the youthful group grabbed five interceptions.

The deepest part of the Arizona defense will be found in the secondary, where four standouts return and have combined for 100 games played and 50 starts over the last three seasons.

Kodiak: If facing AZ means that we're in the Pac-12 championship game, just tell me where to sign.

Arizona's D has a ton of holes in it - not only did they lose three really good defensive ends, but they also had their best safety and one of their starting LBs go down from torn ACL's. Although their secondary is experienced, I think they're going to get exposed this year without the benefit of that ferocious pass rush.
On offense, Stoops can't seem to make up his mind what he wants. They're probably at their best going full-on Air Raid, but he seems to like bringing in power packages just to prove that they can also run it. He'd probably be better off just picking one identity and letting his guys execute. Despite all the hype last year, I'm really not sold on Foles as a future pro QB. He's a product of their system. He doesn't really have the arm or the athleticism to be a game-changer. In fact, sometimes he looks downright awful.
Sadly enough, we have the speed on defense to match-up very well with their offense. And without their defensive ends waltzing through our O-line, I think we'd have a good shot at putting points up on their D.

OhioBear: For that, I think you would have to sign here: 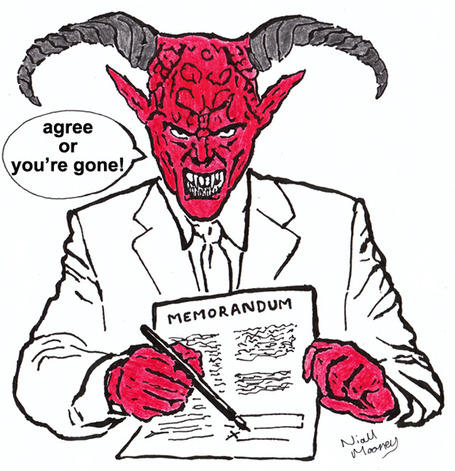 LeonPowe: To get Cal into the Rose Bowl? I sign

This Arizona team has traditionally had a pretty good pass offense the past few years and it'll be interesting to see how they'll match up against Pendergast's defense again. I think Cal's defense is suited and has some great personnel to go toe to toe with Arizona. I can see the Cal D holding this Arizona team to only 10 points or so should the two teams meet in the Pac-12 championship game. So long as Cal's offense shows up, this should be a game that Cal should win.