Although they raced out to an early 1st quarter lead 24-12, our guys struggled when the Norwegian National team switched to a 1-2-2 zone.  Norway grabbed a one point lead at the half, 37-36, and extended it to 56-49 by the end of the 3rd.  Cal hung tough, but just couldn't get all the way back.  Assistant Coach John Montgomery described it as a "physical game." He also mentioned that "this trip is all about experience for everyone."  I'm sure if this was a must-win game, that Monty would have leaned more heavily on his starters.  It can be painful watching younger players struggle with turnovers, but these are minutes which will play dividends in conference play.

The silver lining from this game is that Harper Kamp was no longer bothered by his achy knee and was able to play significant minutes.  Jorge Gutierrez was still out with his sprained ankle.  It had to have been a good learning experience for the young Cal team with regards to ball movement and poise against a tough zone. 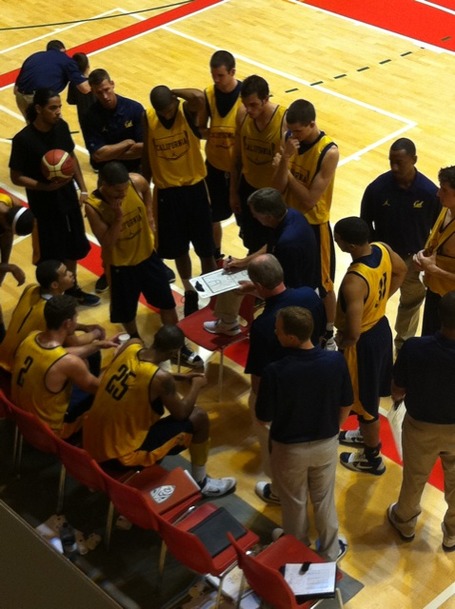 Next up for the Golden Bears, a few days off and then games against the Danish National Team.  Again, audio/video/online coverage is unknown, put we'll post if we here anything.

After the jump, the actual live tweets from @JohnMonty's account:

A fast first qtr with the Bears leading the "Norge" 12-7. Strong showing by Kamp on offense and defense - #gobears

End of First - 24-12 Cal up. The fast first slowed with 2 min left due to fouls and both teams using all their shot clock time

Half: Cal down by 1. 36-37. Need to break their zone offense. Hopefully I'll have some stats for you after the game.

Start of the 4th - Bears down 49-56. Turnovers hurt us but the Cobbs on the transition buckets are good

69-64. The Norway National team upsets the Bears in a physical game.

I can't take all the credit, Jenna Hall our admin asst is tweeting during the game - this trip is about experience for everyone

After anyone who is interested, Cal Men's BBall released highlights from their Game #1 win against the Solna Vikings on youtube.  Not much to analyze because it's clear that the Solna team was vastly overmatched.