It's on!  After defeating the Solna Vikings 89-71 this past Sunday, the Cal men play the 2nd game of their whirlwind European tour against the Swedish club team Upsala Basket.

In theory, you can watch the game through a live web stream.  (Not confirmed.  If that link doesn't work, the Cal basketball twitter says to go to the www.uppsalabasket.se website for the video stream.)

Rivals has a good overview of the trip here.

Over 10 days, Montgomery will take his Bears on a five-game, three-city swing which will give his Bears plenty of time to bond, as well as to integrate newcomers David Kravish, Christian Behrens and now-eligible guard Justin Cobbs, who sat out last season after transferring from Minnesota.

Who exactly is Upsala Basket?  They are a club team who was founded in 1960 through a YMCA affiliation.  When the Swedish Basketball league formed in 1992, Upsala Basket was one of the founding members.  As a professional club team, Upsala has a reputation for developing talent.  One of their best young players, Sebastian Norman, received a scholarship offer from Lamar University and will play for Pat Knight.  Another of their players, forward Johan Jeansson, plays for the Swedish national team and recently put up 17 points against Georgia.(Russia)

After the jump, projected starting lineups.  This game is supposed to be broadcast on Web-TV.  I'll try to update with links when I find them.  If anyone finds them first, please post in the comments.  Go Bears!

G:  Jorge Gutierrez (*Sprained an ankle in the final scrimmage prior to the Euro trip and DNP agains Solna.)

Without any stats, ages, heights, weights listed for most of Upsala Basket, it's hard to get a feel for their team.  They do have two players skilled enough to play on the Swedish National Team.  I would expect typical European basketball:  all of the players can dribble, pass, and shoot.  In particular, their bigs can probably all hit from the outside.  Although it's likely that we'll have an edge with overall athleticism, they might be adept at playing team ball if these players have played together for a long time.  Also, if they have any older players, they might be stronger or savvier than our college-age guys.

1)  Cal defense versus their perimeter shooting.  In particular, Kamp and Solomon will need to be able to cover out to the 3-point line.  Also, it was a mixed bag guarding the perimeter with our guards and wings last year.  I'd expect everyone on Upsala to be able to shoot from deep and to be proficient at moving without the ball.  Have our guys learned from last year's hard lessons about battling through screens and switching when necessary?  While I think our starters can hang, will it get ugly when the younger players sub in?

2)  Cal offense versus their zone.  I expect to see Upsala play a lot of zone.  We'll need to be patient in the half-court and opportunistic on the break.  Again, I'm confident that we have the shooting and the passing skills with our starting 5.  It's unknown what it will look like when we have to go to our bench. 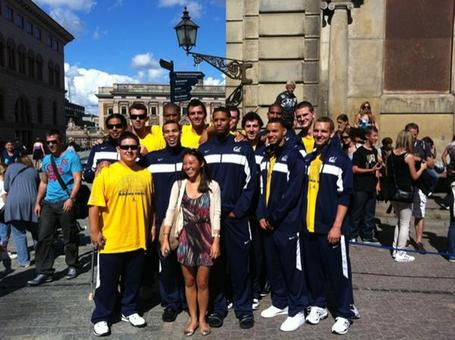