Let's remember Brent and why he's getting into the Hall of Fame. 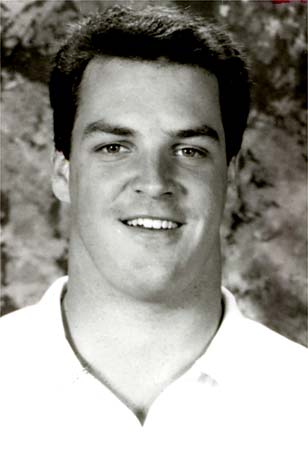 Brent Woodall played tight end for the Cal football team from 1988 to 1991.  Older Blues may still remember Woodall wearing # 31 and starting at tight end for Bruce Snyder's 1990 and 1991 teams that went to back-to-back bowl games, Cal's first such feat on the gridiron since the days of Pappy Waldorf.  Woodall's senior year team, in 1991, went 10-2 and beat Clemson 37-13 in the Florida Citrus Bowl.  Woodall was a key contributor to that 1991 team: he was smart and dependable player for the Bears, a guy whom quarterback Mike Pawlawski could go to in a pinch.  And how smart was he as a football player?  He might have been one of the few inside Memorial Stadium who knew that Russell White had committed a 15-yard penalty when White famously hurdled a Purdue defensive back on this play in 1991.   (Beginning at the 0:38 mark of the video, White says it was Woodall who broke the bad news to him that hurdling was a penalty.)  Woodall was also athletic enough that the Cal coaches once called upon him for unconventional duty -- in a 1989 game against Washington, Woodall unleashed a quick kick on a third down to get the Bears out of a field position pickle.

Woodall's athletic ability was not limited to the football field. Woodall was also a relief pitcher on the Cal baseball team.  The hard-throwing left-hander was a member of the 1992 Cal baseball team that went to the College World Series.  Woodall would go on to be drafted by the Chicago Cubs in 17th round of the June 1992 amateur baseball draft and had a good rookie season in A ball.  A shoulder injury the following year ended Woodall’s baseball career. 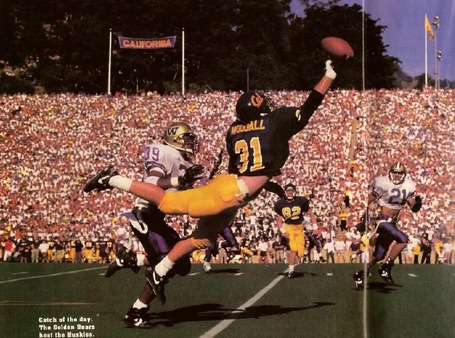 Woodall laid out for this catch in the famous Showdown at Memorial game vs. Washington in 1991.

But the end of Woodall's athletic career was only the beginning of his next career.  Those who knew Woodall -- who earned a bachelor's degree from Cal's Haas School of Business -- probably expected him to go on to great things in the business world.

True to form, Woodall embarked on a Wall Street career.  In 1995, Woodall became an equities trader with Bruyette & Woods, a New York City securities firm, in 1995.  Five years later, Woodall married Tracy Pierce, who was herself an excellent athlete.  (Tracy was a three-time all-Ivy League volleyball player at Columbia University.)  On September 11, 2001, Tracy was five months pregnant with her and Brent's first child, a girl who would eventually be named Pierce Ashley Woodall.

As cruel fate would have it, Woodall never met his daughter. Woodall's office at Bruyette & Woods was on the 89th floor of the South Tower of the World Trade Center.  After the first hijacked plane hit the North Tower of the World Trade Center, Woodall called his wife and his parents to let them know he was all right.  A short time later, Woodall called his family back again, this time to tell them that another plane had hit the South Tower and that he was going to make his way out of the building.

The mini-reunion that Woodall was hosting for family, friends, and former Cal teammates for the upcoming weekend's game against Rutgers (postponed after the September 11 tragedy) never happened.  And Woodall would never make it to the 10-year reunion of Cal's 1991 football team that was held later that year.  And most importantly of all, Woodall left behind a wife he loved and a daughter he never had the joy of holding in his arms.

We induct Brent Woodall into the CGB Hall of Fame for many reasons -- partly as a celebration of his life, partly as a tribute to a Golden Bear who was taken from us too soon in an American tragedy, partly as a recognition that he was a contributor to three of the most memorable Cal teams of the 1990s (1990 and 1991 football teams and the 1992 baseball team). But we would be remiss if we did not mention that Brent Woodall lives on in a significant way, even after his death 10 years ago.

In Woodall’s name, the Brent Woodall Foundation was created "to empower parents of children with autism and developmental disabilities and to encourage their involvement in their children’s therapy by providing educational training, customized academic and behavioral plans, psychological assessments, and modest financial support."  The Foundation is partly the product of a vision that Brent Woodall and his wife had even before his tragic death:

In the events of September 11, 2001, the world lost many exceptional individuals who would have gone on to do countless good for their families and friends, their employers, and those less fortunate than themselves. Brent Woodall was someone whose spirit and dreams must not be forgotten. In addition to being a star in the classroom, on the athletic field, and on Wall Street, Brent had a commitment to children that went beyond the qualities that make a great husband and father. Young men in their prime rarely discuss wanting many children themselves or wanting to help less fortunate children achieve excellence, but Brent himself was exceptional in that regard and he and his wife Tracy were determined to fulfill that promise.

Woodall's widow, Tracy, is the founder of the Brent Woodall Foundation and remains its executive director to this day.  You can read about many of the success stories that have happened through the efforts of the Foundation.

In addition, Woodall's legacy lives on in another way.  A scholarship for an exemplary student-athlete from Woodall's high school alma mater, La Jolla High School, is named in Brent Woodall's honor.   Two athletes who would go on to attend Cal are among those who have received this scholarship in the 10 years since its creation. 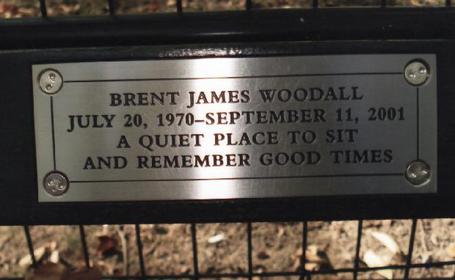 A bench with this plaque sits in Brent Woodall's honor in the Mall section of Central Park in New York City.