Share All sharing options for: Is Coach Tedford's Offense Too Complex? (Part 4)

With fall camp just around the corner, we wrap up our look at Coach Jeff Tedford's offense. In Part One, we looked at the number of pages in his playbook and examined the details of a play itself. In Part Two, we evaluated the rumor that his playbook is more complicated than some NFL offenses. And in Part Three, we asked whether he should switch from a pro-style offense to a "simpler" spread attack.

Let's take a closer look at the quarterbacks of the Tedford era: (Thanks to OhioBear for his help here)

Results: Transformed from a strong-armed, but inaccurate and poor-decision maker to a strong-armed, somewhat accurate, better decision-maker. With essentially the same players who had just gone 1-10, we went 7-5 and would have been bowl-eligible. Highlights include an upset win on the road at then-ranked Michigan State.

Results: Robertson started the first four games and provided solid, if not spectacular play. He gave way to Rodgers by game 5 because it was clear that Aaron was too special to sit. With the exception of the OSU game, Rodgers was brilliant all year. Robertson kept his head in the game and remained well-prepared as evidenced by his clutch play to put 'sc away in triple OT.

Results: Let's just take a moment and bask in the memories of incandescent QB-play. For some reason, I cannot recall how this season ended.

Results: Longshore won the job in camp, but didn't make it through his first start before being lost for the season with a broken leg. Ayoob replaced him but his play was uneven at best. Levy finally got the call and led Cal to a Big Game victory and a Las Vegas Bowl win over BYU.

Results: A 10-win season including a share of the Pac-10 title. Highlights include a 45-24 upset over #11 Oregon, a Big Game victory, and a dismantling of #21 Texas A&M 45-10 in the Holiday Bowl. After the season, Longshore is named by many pundits as the #1 junior QB in the nation.

Results: After a blazing 5-0 start, Longshore has his ankle fractured. Tedford goes w/ Riley over Reed as the backup...and Reed transfers to SJSU where he never is able to fulfill his potential. Longshore is never the same. We lose 5/6 of the next games, including the Axe....Before Riley replaces Longshore in the Armed Forces Bowl and leads a comeback win 42-36.

Results: Thinking that he needs to take a more big picture view, Tedford decides to go hands-off with the offense. After a prolonged QB competition, Tedford names Riley the starter. Due to inconsistency, Riley gets pulled for Longshore. With neither clearly able to distinguish themselves, they split time for the rest of the year. We limp into the Emerald Bowl where we manage to pull one out over Miami thanks to Follet's game-changing sack. Longshore starts, but is underwhelming.

Results: Now the undisputed starter, Riley has an uneven year. Our offense is built around Jahvid Best and is arguably overly reliant on the big play. When teams are able to sell-out to stop him, Riley was unable to consistently make them pay. After Best was lost with a frightening injury, Vereen stepped up to almost single-handedly win the Big Game. The QB position and passing offense remain a work in progress all year. Even the backup position is unsettled with Beau Sweeney replacing Brock Mansion as QB#2 part-way during the season. All of our warts are exposed in a bowl game loss against Utah.

Results: Facepalm City. Riley is better, but still inconsistent. When he goes down with a career-ending injury, it's clear that our backups are woefully unprepared to compete in the Pac-10. Beau Sweeney started the year as a backup, but was replaced by Brock Mansion. Although Mansion had his moments against WSU, it's charitable to say that he struggled in his remaining starts. You can point fingers at the Oline and deservedly so, but the fact remains that the offense sputtered all year and bore little semblance to a traditional Tedford attack.

Results: TBD. But, Maynard has been annointed the starter after only one spring camp.

Answer: The common thread? It's a gross over-simplification of a multi-factorial issue (Oline play, surrounding players, scheme, playcalling, player development, position coaching, talent assessment), but we've had our best QB play and our best offenses while Tedford was coaching the QBs and was heavily involved in the playcalling. To be sure, he's had his misses (Ayoob, Reed). However, every other quarterback he worked with personally was developed into at least a reasonable Division I player; Boller, Robertson, pre-injury Longshore, pre-bar-glass Levy, and pre-coaching-carousel Kevin Riley...oh, and that Rodgers guy. More specifically, Boller and Rodgers became credible players with only 1 spring and 1 fall camp under their belts. Robertson, Longshore, Levy, and Riley all were prepared to be competent starters after only 2 spring and 2 fall camps.

It could be argued that Boller, Rodgers were NFL-level talents. (and pre-injury Longshore) But, I think it's reasonable to speculate that Kyle Boller was not going to be drafted before Coach Tedford's tutelage. And let's face it - his nickname was Jesus-In-Cleats and not Jesus-In-The-Library for a reason; he wasn't exactly known for the mental part of his game and yet was still able to competently run the Tedford Offense after only one off-season.

Rodgers might well be considered an outlier to this analysis because of his incredible talent. The flipside here is that if he was such a can't-miss/sure-fire prospect, why exactly was he found by accident at Butte CC?

Perhaps Coach Tedford's most impressive work was with Reggie Robertson and Steve Levy. Neither quarterback had off-the-chart athleticism or arm strength. Yet, he was able to adapt his offense around their skillsets, and was also able to quickly teach them both to execute it well enough to win games. In particular, his work with Levy was noteworthy because of the limited snaps available to backups buried on the depth chart.

That's six different quarterbacks who were all able to learn and to execute the Tedford offense in two years or less. I think the course material is just fine - it's the instructor(s) we might need to re-evaluate.

Or put in picture form from Dr. Saturday, look what happened when Coach Tedford went hands off: 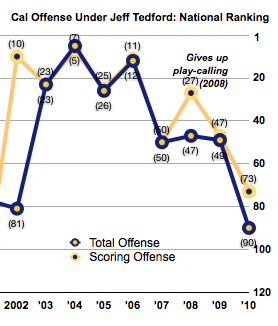 Final Summary: Looking at everything, Tedford's offense puts a lot of responsibility on the players, but so do a lot of successful offenses. I think the position coaching of the skill players, line, and the quarterbacks themselves plays a huge role in their development. In no way do I feel that the college game has passed Tedford by, or that he doesn't understand how to put together a potent offense. He has too many years of proven success to believe otherwise. Even if his system might be complex, he's found a way to make it work for him. It could be argued that we've been somewhat prone to being a jack of all trades, masters of none attack in recent years. But as many of our astute readers have mentioned, a successful offense doesn't look like it has any complexity issues while an unsuccessful offense looks like the playbook was written in cuneiform.(HT carp, Cali49a) Or, when you look at it a different way, a successful trick play appears to be innovative, creative, and aggressive; but an unsuccessful trick play is "too complicated" or "trying to do too much."

*Update* Interestingly enough, Tedford himself was quoted in Berkelium97's excellent report from the Pac-12 Media Day luncheon as saying:

"He did emphasize that he needs to change some aspects of his own offense: "we do need to cut back: less volume, more creativity." He has to take the size of the playbook and "cut it back so everyone understands what they're doing." He described his ideal offense as "diverse and efficient." Modifying the playbook is a challenge for Tedford, as he is the primary play caller this season. For every play he adds into the book, he has to take something out. His goal is to keep it around 100 plays. "

I'm glad that he's gone back to doing what he does best. With Coach Tedford back in a more hands-on role, I hope we'll tighten up our execution and return to the offensive production we're used to seeing. Go Bears!