On Friday, I had the opportunity to attend a special presentation and tour of the Student Athlete High Performance Center (SAHPC). The athletic department put out a nice spread and treated us to a special presentation of the new facilities at the I-House. After the presentation we donned hardhats and bright green safety vests as we toured the exterior and interior of the SAHPC. Today in part, we will cover the High Performance Initiative and the Exterior of the building. On Tuesday, tune in for the interior pics! All photos that do not list their origins are taken and hosted by me.

Getting wined and cheesed while presented with the athletic department's plans and High Performance Initiative: 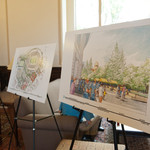 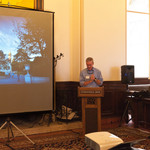 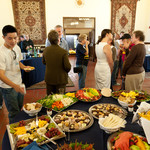 The information in this post is based on the tour given by the athletic department, the department's High Performance website, and the presentation with Sandy Barbour, Athletic Director, and Keith Power, High Performance Director. 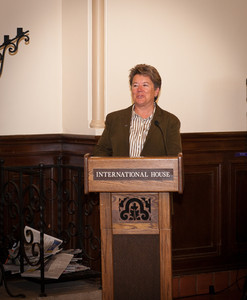 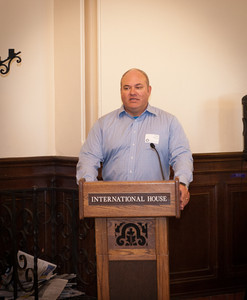 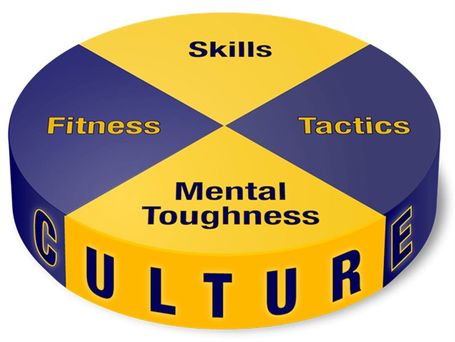 Six years ago, before deficits hamstrung university budgets, Cal Athletics and its new athletic director Sandy Barbour set forth a vision to take the department to new heights of success. In its ‘High Performance Initiative,‘ the athletics administration articulated an agenda that sought more than the simple upgrade of facilities to the day’s standard. It aimed to foster the best in sports science and become "the world leader in the provision of high performance sport for student-athletes."

In many ways the new High Performance Initiative is Cal Athletic’s response to the university’s long-standing preeminence in academia.  During our pre-tour reception, Initiative Director Keith Power suggested one of his goals was to have in Cal Athletics the kind of cutting-edge leadership in innovation already achieved by university academics. More than just reflecting Cal’s institutional ethic of excellence, however, the initiative proposes to utilize the first-rate resources available across campus departments– psychology, nutrition, physiology (Biomechanics, anyone?  Optometry perhaps?)– to provide student athletes a complete toolkit for optimizing performance.  And very much in the spirit of Cal, the High Performance Initiative intends to pioneer into territory not yet endeavored by any other national program.

We see these themes repeated inside (more on that tomorrow) and they reflect the values and culture of Cal athletics.

One thing that we want to make clear is that the SAHPC is just a building. As Sandy Barbour puts it the High Performance Initiative is the "Heart and Soul" of the program. It is really what makes this new building so cutting edge. This tour will give us a sense of how Cal intends to accomplish this goal and become THE Premier sports science institution in the country. 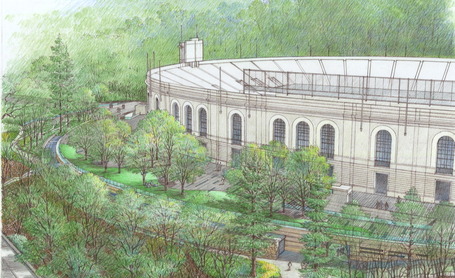 What's striking about this architectural rendering of the SAHPC is how you barely notice that it is even there. This choice is very much intentional as we will see the more we explore the SAHPC. The center is not meant to be a flashy building that stands out and draws attention to itself. Rather, from its very structural design it invokes the mantra of integration--making the athletes and the program better by virtue of synergy rather than flash. We will make our tour of the exterior starting on the south side and head north:

Here the fourth floor of the SAHPC comes into view as we descend the long ramp from the south side of the complex. Note how the building emerges from the ramp. On the back side of these levels is the south rim stair case that leads to the south entrance of the building. Note the lines in the concrete which give it a streamlined and spartan look that highlights the building's focus on functionalism. The color of the concrete as seen here is the final color per university officials. It may receive a clear coat but there won't be any additional pigment added to the concrete that is very popular right now. This makes sense in terms of the architect's goals of not detracting from the character of Memorial Stadium. Tradition is respected and the building is designed to blend into the background. In regards to efficiency note the rather large windows here on this side of the building allowing a massive amount of light to pour in--this detail will play a significant role later as we will see in tomorrow's post.

Approach to the south side. 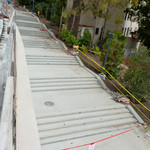 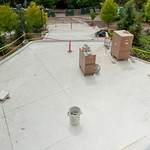 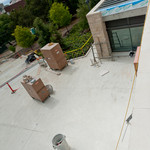 As you can see above a stair case hugs the southern edge of the SAHPC providing an main artery for traffic from the campus. The center thumbnail shows the wide expanse of one of the main arteries that will likely line up with the planned Business-Law collaboration building. In the right thumbnail one can see the offensive staff meeting room. Under the spot where these pics were taken is a tunnel that leads to the south staircase: 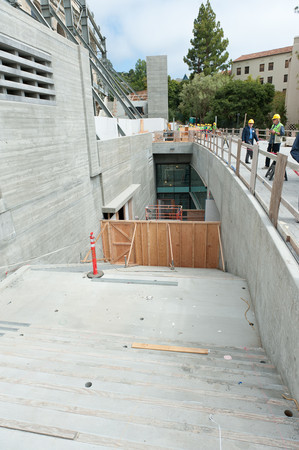 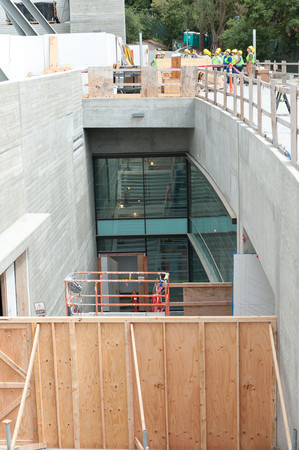 This door was nailed shut so we had to take an alternate route into the SAHPC (it is an active construction site after all). But this is a good place to see the size of the windows of the building for a stairway that acts not only as a footpath but also a light well--integrated and efficient.

Here is a close-up shot over the temporary wall. Note the etched glass lines that stretch across the very large windows. This horizontal motif is present throughout the building and gives it a futuristic feel that screams efficiency and speed. It works well in unison with the lines created by the concrete casting molds. Very cool!

From the other side of the wall from inside the SAHPC:

Just very dramatic lines that give a sense of flow to the entire space. Also tons of light pouring through these stairways. The picture is taken from the "second floor" and the landing that is visible is the landing that empties out into the tunnel and main arterial stairway from above. Below is the tunnel I'm talking about in a university rendering of the exterior staircase and tunnel (note the strong horizontal lines present in the design): 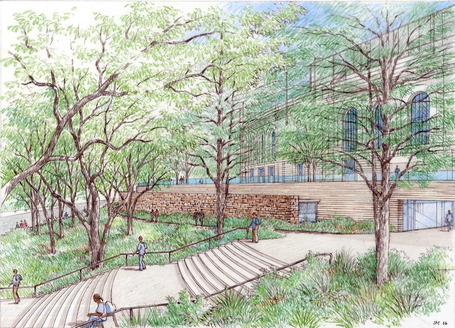 Moving to the north end of the SAHPC we come to the main artery for game day which won't be completed until all the other projects are finished. It is currently acting as a staging area for the construction crew:

The approach to the stadium will be glorious as can be seen in this architectural rendering: 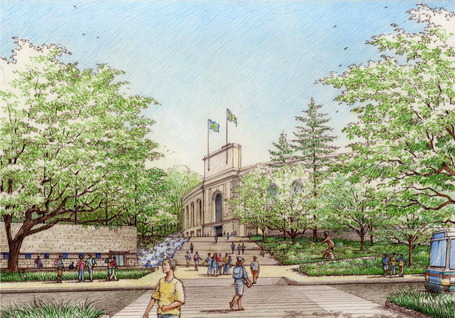 The north side also houses a smaller stairwell that is almost too easy to miss. But you'll want to pay special attention to its location as it is the football team's game day staircase: 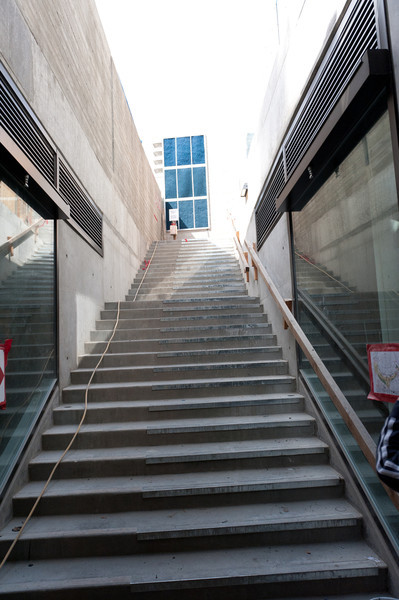 This is the staircase which the team will ascend on game days. The locker rooms are down another floor. It's a long climb up for the athletes on game day, but the opening at the top is rather dramatic as they will find themselves face to face with the immense beauty that is Memorial Stadium: 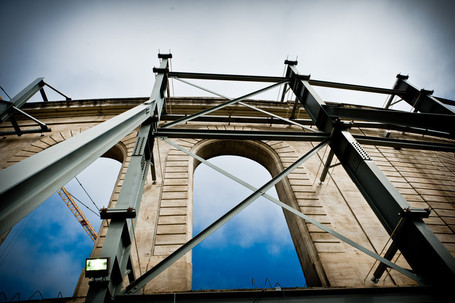 Turning around we can see the North arterial stairwell (the football stair way is to the left and out of view): 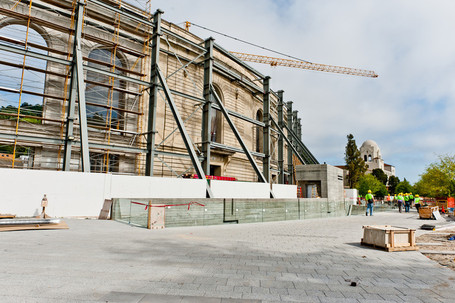 Integration doesn't just pertain to building profile but the fan experience. As most Cal fans know the roof of the building will serve as a game day plaza (how cool will it be for ESPN to have their gameday set there?). The north end of the plaza area will have gates that will serve as ticketing areas, so the roof will be open only to ticket holders on game day. Below is one of the posts that will support the gates:

The entire building just screams of efficiency and modernism. Very sleek building profile with lines that extend almost out of view. It makes the building seem like it goes on forever. The reality is that the SAHPC is so massive that these infinite lines do its immense size justice. These are not optical illusions. This is one HUGE building.

In the distance you can see the poles where the game day gates will be. In the foreground you have the center stairwell that leads to the ground level and during non-gamedays will provide access to Piedmont via the center walkway.

And I thought I would finish with some shots taken from the stadium vista point:

Tomorrow, we go inside and see how these themes and the High Performance Initiative are manifested. Come back, because it gets even better!