Is Coach Tedford's Playbook Too Complex? (Part One)

Share All sharing options for: Is Coach Tedford's Playbook Too Complex? (Part One)

It's no secret that the once-potent Cal offense hasn't been the same the past few years. Although we used to be known for a diverse attack, clever game plans, and methodical execution, more recently we've seen inconsistent play across the board.

Among whispers of recruiting misses, position coaching, and an over-reliance on the big play, there has also been mention that Coach Tedford's playbook is too complex. It's an interesting thought - previously touted for being "pro-style," "balanced," and "multiple," now it's apparently too complicated to teach to college players. So what exactly defines complexity? Is it the number of pages? The intricacy of the plays themselves? Or the amount of responsibilities/reads required of the individual players? Let's take a closer look:

Question #1: Are there too many pages of plays in Coach Tedford's playbook?

Scanning a collection of college and pro playbooks:

***I cannot verify the legitimacy or completeness of these playbooks. These were all found online.***

26 pages of pass protection schemes: This includes 13 different schemes, 6-8 different ways to block for each scheme based on the most common defensive fronts.

21 pages of screen plays: 16 different plays, some of them with 6-8 blocking schemes based on the most common defensive fronts.

21 pages of play-action passes: 11 plays, all of them with 6-8 blocking schemes based on the most common defensive fronts.

8 pages of goal-line/short yardage: 8 different plays, all of them with 6-8 blocking schemes based on the most common defensive fronts.

6 pages of different run calls and types of pull blocks.

79 pages of run plays: 35 plays, many of them with 6-8 blocking schemes based on the most common defensive fronts.

*Per Hydro, this is probably not all of the playbook because it does not include any of the standard passing plays, or receiver route trees/adjustments.

So are there too many plays in Coach Tedford's playbook?

Answer: Does the total number of pages really correlate to overall complexity? For all we know, Auburn's playbook is: Play #1: Run fast! Play #2: Throw far! And the rest of it is full of centerfolds.

It would make sense that Bill Walsh's offense and Mike Martz's offense are more complex and this is supported by the number of pages in their respective playbooks. It also makes sense that Tom Holmoe's playbook resembled a reader scrapped together from Hare Krishna airport pamphlets.

So, our final answer is...perhaps. Relative to the other college playbooks, Tedford's would definitely rank near the top in breadth, especially if you add the missing pass plays and route trees. (+30-50 pages?) When you consider that since '04, we've also incorporated wrinkles and schemes from three different coordinators (spread concepts, zone-read, wildcat), you can certainly make the argument that we're trying to do too many things.

Question #2: Are Tedford's plays too intricate or too complicated?

Let's take a look at a staple play of any playbook, the play-action pass. It is arguably more complicated than a pure run or pass play because it requires the entire offense to execute a believable feint and than execute a different play.

***I have deliberately omitted some details, terms, and names. Although Cal's playbook is probably out of date, I didn't want to take the chance that anything detailed could be used to help scout our Golden Bears***

- FB: One blocking assignment or release to run route 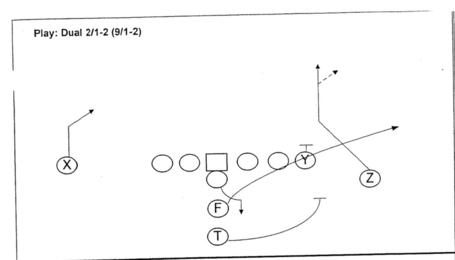 *There are 8 different line/coverage calls which indicate how the defense is lined up, but the blocking scheme is exactly the same in each case. 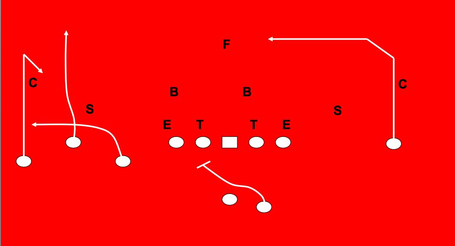 The play designs are similar with a fake inside zone run followed by a dropback and a downfield pass to the playside wide receiver. The receivers and running backs all run patterns or block as determined by the play call.

The Cal O-line has several different options for who they're supposed to block. UCLA goes the other way. "Block the 1st thing to show" is definitely keeping it simple. Utah also has a simple default blocking scheme for play-action passes with pre-determined blocking assignments.

Summary: Similar play design and goals. However, Cal's blocking scheme can be considered more complex because there is more responsibility for the players to make the proper reads and decisions.

But, is a more "simple" approach better? In 1998, Bob Toledo coached UCLA to the Rose Bowl with a team featuring future NFLers Cade McNown, DeShaun Foster, Freddie Mitchell, Kenyon Coleman, and Larry Atkins. The next several seasons? 4-7, 6-6, 7-4, and then a 7-5 campaign in 2002 that resulted in Toledo getting fired. Did Toledo suddenly forget how to coach? Did other teams figure out how to stop an overly simplistic offense? Or was Toledo unable to overcome the fact that his quarterbacks were Drew Bennett and Cory Paus?

With regards to Cal's "overly" complex blocking schemes, they certainly didn't seem to hinder JJ Arrington on his way to a record 2000+ yard season. It does make sense that Cal's best lines and best offenses have featured veteran, heady linemen. (Alex Mack, anyone?) A sample size of one is too small to draw any definitive conclusions, to be sure, but a scan of the various playbooks suggests that the plays are too analogous for this to be the smoking gun.