Recently, we got the opportunity to peek inside the Student Athlete High Performance Center thanks to the hard work of photojournalist Kelley L. Cox.  We noticed that Ms. Cox had a lot of other Cal-related photos and decided to seek her out to learn more.

Kelley Cox is a freelance photographer who has had the opportunities to take a lot of collegiate sports-related photos.  While attending Cal, she had an opportunity to intern at Golden Bear Sports and her love of photography took off from there.  Now, she has her own photography empire, spanning a variety of sites.  Her About section reflects all the places where her photos have appeared:

You can see some of the many websites where her photos have appeared here.  We were excited to talk to Kelley, not only about in depth photography topics, but also her experience shooting Cal sports.  We are looking forward to seeing other great shots from her in the future.  Please join us after the jump to see her answers.  Many thanks to Ms. Cox for taking time to answer these questions.  GO BEARS!

1. Have we made you a fan of Cal sports? Who do you root for in the Big Game?
No question! I'm a Cal Alum, Go Bears! 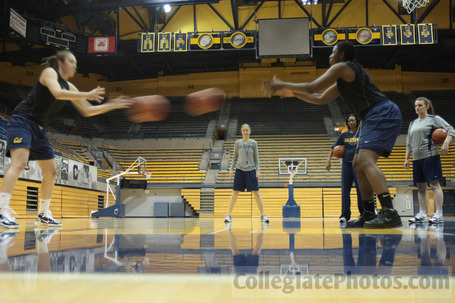 2. How did you begin your love for sports photography? Did you play sports growing up?
It's just me and my rather uncoordinated sister (sorry, Stacey) so I was always the one throwing around the football with my dad and watching sports with him. Though I tried nearly every recreational sport offered, the closest I've ever been to a competitive athlete, was as the co-captain of my high school badminton team. At my first orientation for Berkeley, I saw a girl waving the Cal flag and decided my goal was to wave the flag before I graduated. I joined Rally Comm, proudly waved the flag to "Big C" at few football games and would bring my Canon Rebel with me and take photos. I was having a lot of fun with it, so when I saw a photo on calbears.com with the byline GoldenBearSports.com, and learned GBS was the official photographer of Cal Athletics, I emailed the owner, John Todd, to ask if he had, or wanted to create, an internship. With guidance from John and other GBS photographer Michael Pimentel, I designed my own internship, basically photographing every Cal sport I could attend with a practice-makes-perfect mentality. Each year I took on more responsibilities, slowly upgraded my gear, and by the time I graduated, with the support of my family and encouragement from photographers I had met over the years, I knew it was something I wanted to pursue as a career.
3. How did you get into college sports and especially Cal Athletics?
Though I am incredibly fortunate to also photograph professional sports, I find myself drawn to college sports. College athletics have so much soul. The coaches know they are developing elite level athletes, but they are also aware they working with young people and playing a huge role in their development as people. The players have such a strong sense of unity both within their team and across the entire athletic program. The fans don't just show up to games but actually help support the program beyond ticket sales. Working closely with an athletics program and being a team photographer as opposed to news photographer, allows you to really tell the story of the program, not just great action of individual games. To be able to photograph my alma mater is the biggest treat of all!
4. What's your favorite Cal sport to shoot and why? 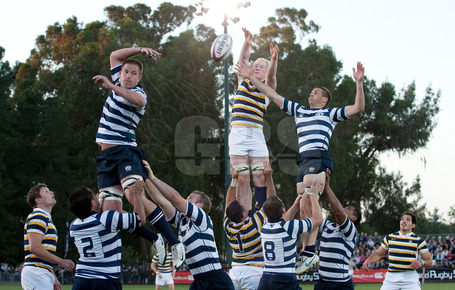 Rugby. My first game, I was simply blown away. From a photographer's perspective, there's such a variety of plays. Players are lifting each other up, playing the ball with their hands and their feet, tackling full speed, diving for the try. It's thrilling to watch. The level of play is so intense, every game guarantees the opportunity to get a portfolio worthy shot. The rugby setting, especially when they played at Witter Rugby Field, provides great feature photos, which speak to the history of the game and the legacy of Cal Rugby. A rugby alumni reception was my first ever solo assignment for GBS and their staff is consistently helpful and appreciative of my work so I will always have a special place in my heart/camera for rugby.
5. Which Cal sport has the best coaches & players to work w/?
Cal Women's Basketball. Joanne Boyle built up an incredible program and I'm excited to see Lindsay Gottlieb take it to the next level. Coach Gottlieb granted me incredible access from day one of her hire to work on projects outside of my work with GBS, to build my own brand and style withCollegiatePhotos.com. The entire staff and the girls have been supportive and enthusiastic about trying new media and methods of covering college athletics. I've been able to shoot video at practice, not for studying in the film room, but to create a piece about player development. I've been able to follow Coach Gottlieb through a walk-through of the High Performance Center under construction to get a sneak peak at how the facility will serve the campus. I also lent the girls my camera for the weekend to photograph each other to offer a truly inside look at the culture of Cal Women's Basketball. It's great to work so closely with a team and be able to meet their needs while still being offered a lot of creative freedom.
6. What's the funniest moment in your Cal photoshoot experience?
Last year, we scheduled men's crew head shots to be taken outside Evans Diamond, as they had been historically. I arrived at 8:30 and as I was setting up, a police officer came and informed me they were going to need to evacuate the area by 9:30. He didn't want to give specifics, but was not convinced that it would be ok for me to photograph the men's crew team along the pavement above the field from 9-10.  Thankfully Tim, the men's crew SID had reserved the club room at Haas Pavilion and contacted the players so they would know to head there instead. From the club room, in the middle of head shots, we see a helicopter land on the Evans Diamond field and out walks Bill Gates who was apparently speaking at Zellerbach that morning. I laughed to myself and thought, only at Berkeley!
7. Any close encounters or too close encounters with athletes on the sidelines (e.g. have you ever been run over?) 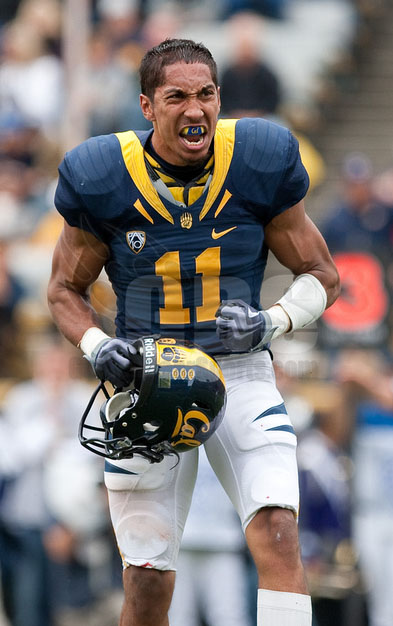 So far I've been pretty lucky. I'd like to think I'm quick on my feet as well pretty good at curling up with my gear in the fetal position. The worst encounter was probably the Kraft Fight Hunger Bowl last January at AT&T Park between UNR and BC. They had signboards up along the sideline to sit between, which meant as the BC player was coming at me, I couldn't dodge left or right to get out of the way and he tumbled right into my leg. I had a bruise for months! It comes with the territory and both me and my gear survived so all is well. I'm looking forward to how Cal redesigns the field for this season at AT&T and hoping it doesn't include those signboards.
8.  Do you have a favorite photo you have taken working for Cal Athletics?
Ooooh, that's a tough one. A lot of my favorite shots aren't necessarily the high action ones you see on the ads but the personal ones that have meaning to me. This shot of Alexis Gray-Lawson and Patrick Christopher comes to mind. The shoot was for the Cal Sports Quarterly with the idea to match that week's Sports Illustrated cover of having the top men and women's player sort of battling against each other. As I was setting up the lights, they were just relaxing, kind of goofing around, and just posed themselves like this. I really like the idea of a portrait not coming out of specific instructions that remove the subject's personality but allowing them to be themselves in front of my lens. This shot also spoke to me on why I like photographing college athletics; they were happy to be there, supporting each other, and living up to their role as representatives of the university. It wasn't used anywhere, but it's one of my personal favorites.
9.  Do you have any basic tips for those of us who use point-and-shoots to capture photos at Cal sports events?
Unless you're beyond psychic at anticipating plays, your biggest hurdle will be working with the shutter delay. That second between when you push the button, and the picture is actually taken can be frustrating. You can try to pre-focus on the action as you follow the play and time it just right, but if you're frustrated and struggling with the action, look for feature photos. The moments away from the ball or after the big action are sometimes the most visual. If you don't have an assigned seat at a game, move around to try and get a nice angle in relation to the sun with limited distractions in the background. Keep in mind photos should be fun and don't let taking pictures take you away from actually enjoying the game!
10.  How about some intermediate tips for those of us who use SLRs to shoot photos at Cal sports events?
For those fortunate enough to have an SLR camera, take advantage of some of the more manual settings. Never let a sports image be less than 1/500th of a second and try to get your aperture as big as possible (smallest number, i.e. f/2.8) to get that shallow depth of field and adjust ISO depending on the amount of available light. My M.O. for day games is shooting aperture priority at f/2.8 and set the ISO to the lowest possible without sacrificing shutter speed. For night/indoor games, depending on how powerful the lights at the stadium/complex/field are, I stick with shutter priority at 1/640th and increase the ISO. If I'm underexposed even at 1/640th, f/2.8 and ISO 2500. I'll brighten it in photoshop before slowing the shutter. It's easier to brighten a dark photo than it is to sharpen a blurry photo. Experiment with what works best for you and have fun with it. 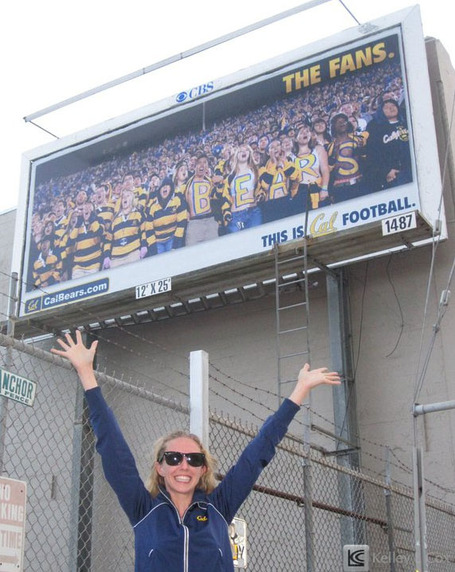 11.  Any expert tips for those of us who might be looking to shoot photos for publication or widespread dissemination?
Create some kind of online portfolio to send out and ask around. Look into wire agencies and newspapers who might be looking for photographers. Or even if they aren't necessarily looking, they might be willing to sponsor your credential to a game, and that's the first step. You can always check out sportsshooter.com which is a useful guide to learning more about the sports photography, the gear, the skills, and the industry. And feel free to contact me, I'm always excited to help budding photographers in whatever way I can! =)