In 2009 in Autzen, Jeremiah Masoli was working hard the weak points of the zone defense Cal ran. He generally succeeded as receivers caught almost every ball that was thrown their way and coverage broke down on multiple occasions. In 2010, Clancy Pendergast changed the pass defense approach against Oregon a bit, and the results early on were quite fruitful and led to plenty of frustration for the Ducks.

Here's video of one of the first passing plays for the Ducks after Oregon's first fourth down conversion. Analysis after the jump.

While safety Chris Conte was assigned to spy Darron Thomas, the four remaining defensive backs in the 3-3-5 would do their best to try and contain the four other offensive options (generally at least three wide receivers and a tight end, sometimes four wide receivers). The first pass of the game illustrated that man-to-man concept the Bears would play, and it was further emphasized on the second pass. 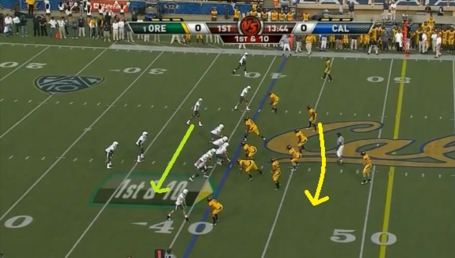 Cal is in their 3-3-5 nickel formation they ran almost the entire game. Oregon has a four wideout set--three wide receivers set left, one to the right. Lavasier Tuinei (close receiver) will go in motion from left to right. Josh Hill (assigned to Tuinei) shadows him the entire way.

I'll ignore the left side in this play; Thomas doesn't look in that direction on this play. 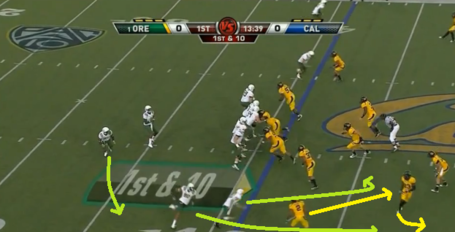 Although this is not a pass play, Thomas is still reading an unblocked man, in this case Mychal Kendricks. How Kendricks reacts to this play will determine who Thomas decides to pass the ball to.

Based on the way Thomas's eyes are scanning the field, what Oregon wanted to do originally is attack the middle with Jeff Maehl, who runs inside on a curl and provides a nice safety valve option (Marc Anthony is playing a little off Maehl, probably to guard against the deeper throws). However, there's a lot of congestion. First, Mychal Kendricks (unblocked on this play) does not rush the quarterback immediately, meaning Thomas does not have a clear passing lane to Maehl.  Perhaps Thomas is looking straight toward Kendricks's side of the field to freeze him from rushing him, then going to a secondary option.

One possibility was the motion receiver Tuinei, who seems to be running a vertical pattern straight down the sideline. However, Hill has shadowed him the whole play, and Thomas probably has a good view of that coverage. The only other option on this side of the field is the uncovered Barner running toward the unoccupied flats. Perhaps with receivers otherwise occupying blockers and with Kendricks having to pursue from behind, Thomas believed this was the strongest option on this play. 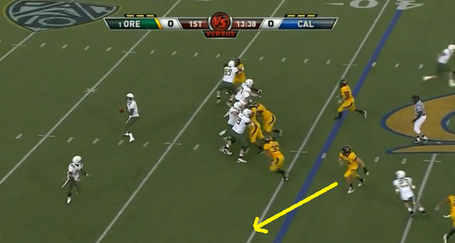 Pass protection also seems to be angled in one direction, and with the running back moving toward the right flat, there's no screen play developing. Straight up pass.

At first glance, it looks as if Thomas does gain the traction he wants. After holding his contain point and realizing Thomas won't be running at least initially, Kendricks eventually makes a go at the Oregon signal-caller. Thomas releases the ball to Barner. With Kendricks now having to pursue from behind, it looks like there will be space for Barner to exploit for some nice small to medium gains.

Except that's not what happens. Turns out Mike Mohamed is playing a little man coverage of his own.

See, Pendergast is making sure that all options are accounted for on this play. He wants his outside cornerback Anthony covering Maehl slotting inside. Kendricks is playing run contain to prevent the Darron Thomas scramble. And that means Mohamed takes Barner if he runs toward the right side of the field, his side. (If the play develops the other way, I imagine linebacker D.J. Holt is responsible for shadowing Barner that way).

Once Barner went out into the field, it became clear Oregon's first intention on this play was passing the ball. Mohamed could thus play man coverage on Barner and shadow him toward the sideline. Barner has no choice but to step out of bounds.

Another look at the play here from the playbook view. 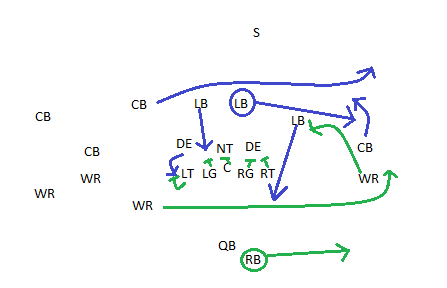 As you can see from the diagram, the man principles of man-to-man coverage are in place. Hill runs in motion with Tuinei and covers him up down the sideline.  Anthony is shadowing Maehl (although he does give him some space on his short route). The two receivers on the left side are being guarded in a similar fashion.

Man-to-man defense was a principle that served the Bears well against Oregon, and not just in the pass game. In future posts we take a look at what Cal did to slow down the potent Oregon run attack.