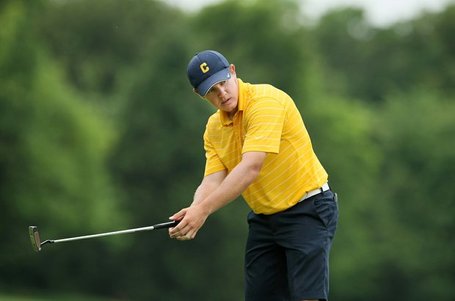 Michael Weaver was in contention for the individual title, entering the third round tied for 6th.

The Cal golf team's quest for the program's second national championship in school history ended Thursday, as the Bears tumbled to a tie for 19th after the third and final round of stroke play at Karsten Golf Course in Stillwater, Oklahoma.  Cal shot a 15-over par 303 as a a team on Thursday to finish the tournament at 38 over par (300-299-303).

The Bears entered the final round of stroke play competition in 16th place, but could not make a move up the leaderboard.  It did not help that Cal operated a man down on Thursday: freshman Ben An was forced to withdraw due to illness after a trip to the hospital on Wednesday night.  Thus, Cal was left without a safety net: the Bears were forced to use all four scores posted by their four remaining golfers.

Thursday also marked the day that the NCAA crowned an individual champion.  Cal's Michael Weaver entered Thursday's third round with a realistic chance at the NCAA individual title, starting play in 6th place, just three shots off the lead.  But Weaver could not make a serious charge on Thursday, shooting one-over par on both nines to post a two-over par 74.  Weaver ended up in a tie for 8th, five shots behind NCAA champion John Peterson of LSU.

Sophomore Max Homa finished strong for the Bears, carding an even par 72 on Thursday.  Homa's round vaulted him from a tie for 36th to a tie for 17th at the tournament's finish.   Homa looked to be on his way to his first round under par in the tournament after birdies on the 12th and 14th holes put him a 1-under par for the day.  But Homa gave those shots back, bogeying the 15th hole and the brutal par-4 17th before finishing with a birdie on the par-5 18th.  Cal coach Steve Desimone was impressed with Homa's performance.

"Max put together three really solid rounds at the NCAA's," said Desimone. "He's had a great year and may wind up being selected as an All-American. If so it's very justified. He has played well all season."

With An's unfortunate withdrawal from the tournament, the scores of seniors Stephen Hale and Eric Mina, both of whom had struggled in the first two rounds, were assured of counting in Cal's team score for the third round.  Hale bounced back from Wednesday's round of 80 with a 4-over par 76.  Hale's round could have been even better: after an eagle on par-5 14th hole, Hale had gotten to 1-over par for his day.  But bogeys on his final three holes pushed him to 4-over for the day and tie for 102nd overall.

Meanwhile, Mina's struggles at the Karsten Golf Course continued.  Though Mina managed two birdies on the day, his six bogeys, one double bogey, and one triple bogey added up to a 9-over par 81.  Mina, the 2010 Pac-10 individual champion, finished his collegiate career with a 135th place finish at the NCAA championship.

Despite Hale's and Mina's struggles at their final collegiate tournament, Coach Desimone had nothing but praise for his two seniors.

"Stephen and Eric are smart players that leave a tremendous legacy here," said Desimone. "Those guys were really the foundation of this program moving back into the top levels of college golf. Any way you look at it they were great collegiate players and they are two of the best players in the history of our program." 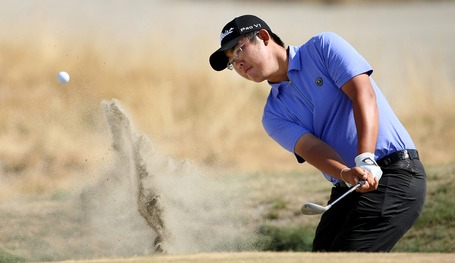 Ben An, the 2009 United States Amateur champion, appears to have completed his one and only season as a California Golden Bear.

An, the 2009 U.S. Amateur champion, told Golfweek he’s "95 percent certain" that he’ll turn pro after this year’s U.S. Amateur. Only a major injury or other unforeseen circumstance would cause him to remain amateur after this summer, he said.

An was 17 when he won the U.S. Amateur at Southern Hills in Tulsa, Okla. He is the youngest champion in tournament history. He advanced to the semifinals of last year’s U.S. Amateur, nearly becoming the first player since Tiger Woods to successfully defend his title.

"I just want to give (the Amateur) another try," An said. "I always wanted to play professional golf. I just want to face the challenge. It was going to come one of these days, so I just decided to turn pro and give it a shot.

An said he has informed his teammates and Cal head coach Steve Desimone that he will not return to Berkeley for his sophomore season. He may attempt European Tour Q-School in addition to the PGA Tour’s qualifying tournament, he said.

An is No. 141 in the Golfweek/Sagarin College Rankings. He shot 81-78 in the NCAA Championship’s first two rounds before withdrawing due to illness.