When we last left you, the Bears led 3-2 after three and a half innings, but that lead felt tenuous.  Cal had let DBU starter Jared Stafford off the hook a few times, and the Patriots had seemingly found their legs.  It looked like it was going to be a back-and-forth affair the rest of the way.  Would it turn out OK for the boys in Gold?!?

Chad Bunting led off the decisive 4th inning with a loud double that got the crowd excited.  After Darrell Matthews flew out Derek Campbell (who only played mainly because Tony Renda hurt himself enough to that he couldn't play his usual 2nd base) picked up his 2nd of 3 hits on the game with another double, driving in Bunting.  Austin Booker would ground out to advance Campbell to 3rd, and up stepped Tony Renda, who up to that point hadn't gotten a hit in the series.  You knew that wasn't going to last.  Renda came through with a huge single to give Cal a 3 run cushion, which for some reason beyond me seemed like a much bigger lead than just 2 runs.

Chadd Krist and Marcus Semien would both reach to load the bases, but Devon Rodriguez was unable to blow the game wide open. 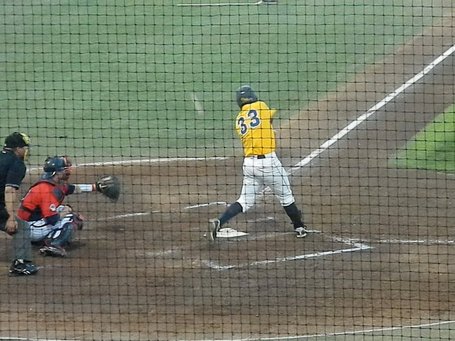 Devon saves his bases loaded hits for when Cal really needs them.

And as it turned out, that 5-2 lead would be enough, thanks to a pitching staff that shut things down for the rest of the game.  Erik Johnson, after a rough first 3 innings, settled down by retiring 9 of the last 11 batters he faced, including a dramatic strike out to strand two runners that had walked to end the 6th inning.  He then gave way to a bullpen that has carried over their regular season dominance big time. 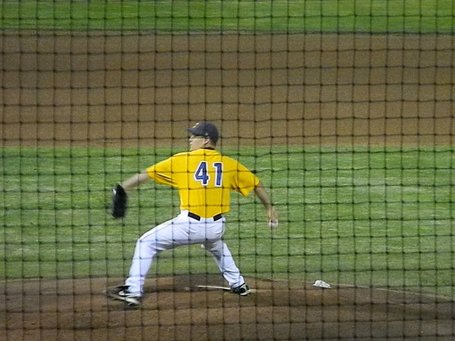 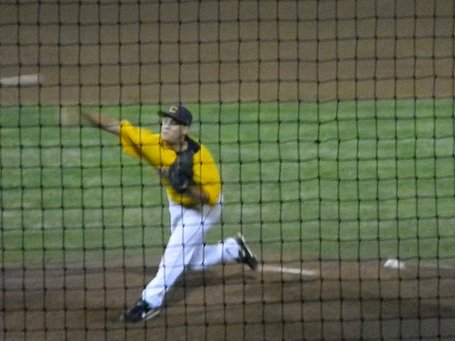 Followed immediately by lefty Kyle Porter, who I absolutely love watching.  Dude's motion is unique and effective, and he's just a freshman! 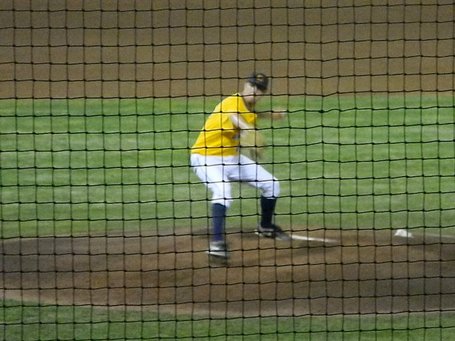 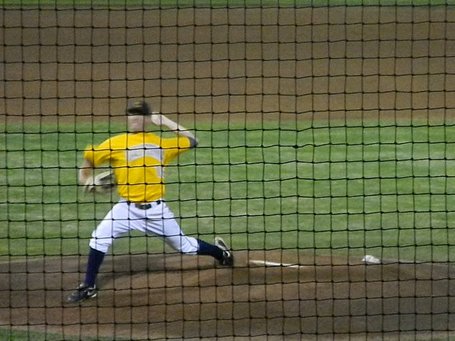 And finally it was time for Cal's closer, Matt Flemer.  At this point Cal had added an insurance run in the 6th when our 1-2-3 hitters all had rather similar seeing eye singles.  But the run seemed perfunctory, unnecessary.  The pitching staff had things on lock down: 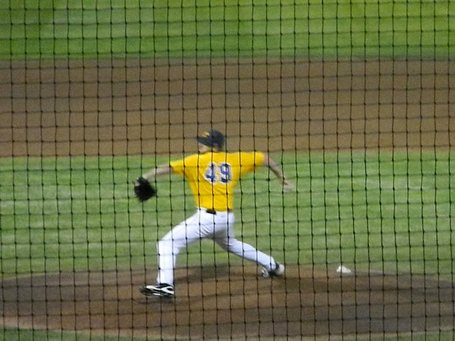 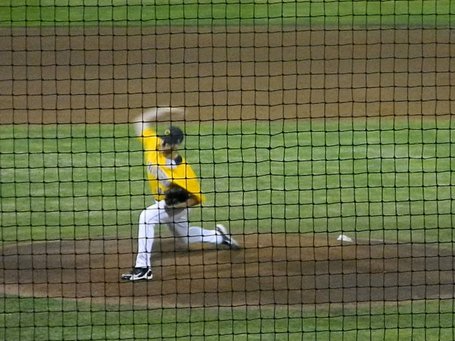 Just two batters reached on Cal's bullpen, one on an error.  Miller and Porter both recorded two strike outs.  For once in my life I wasn't ever really nervous about a Cal game.  And when Derek Campbell snared a low liner to send the Bears to Omaha, this was our expressionistic take: 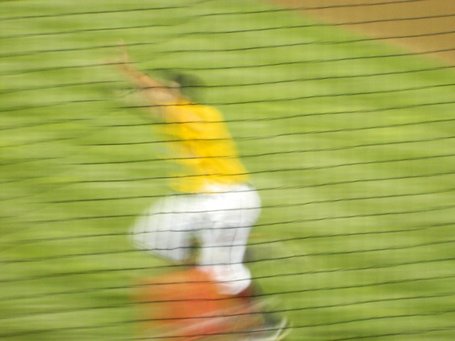 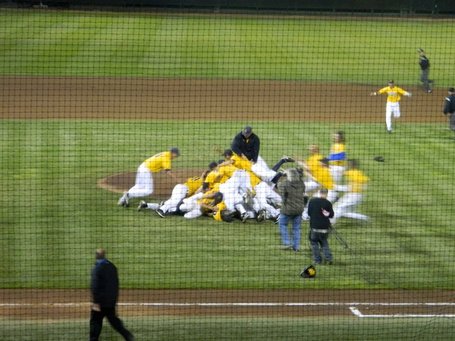 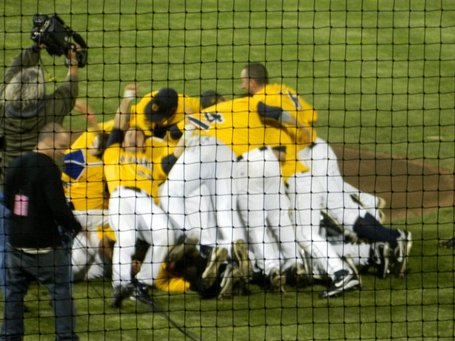 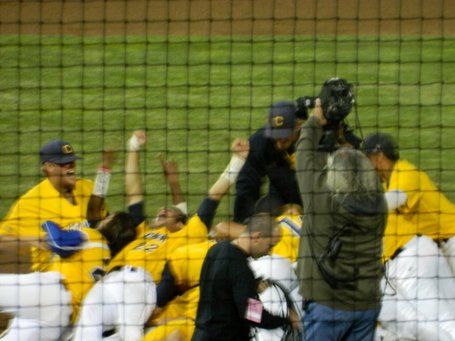 The players finally got up off of the pile and soon turned to the fans to applaud back.  It was a great moment, because you could feel the gratitude the players felt towards those in the audience who had put the time, effort and money in to saving Cal baseball. 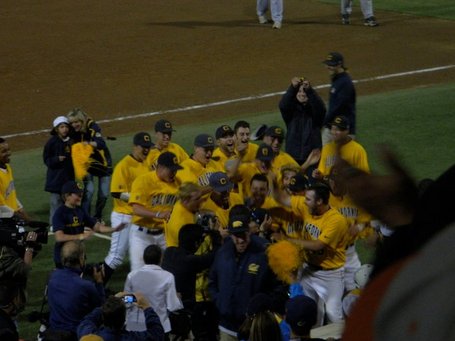 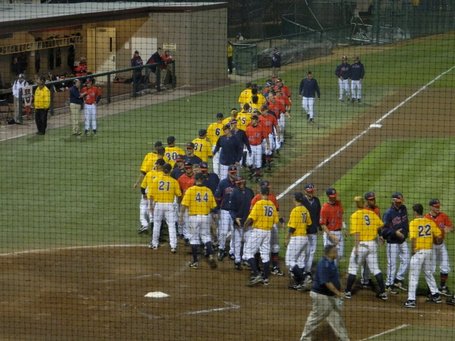 Gotta hand it to Dallas Baptist and their fans - they stuck around well after Cal celebrated for the post-game hand shake, and their fans were steadfast in their support, even for players who had tough days.  Good team, good fans. 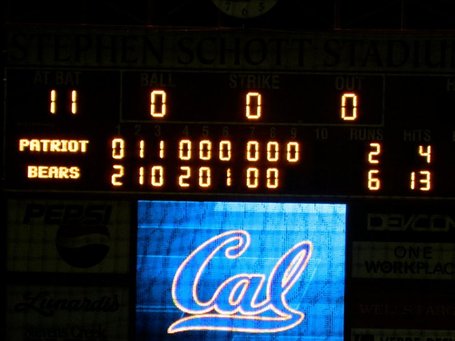 And rarely have sweeter sights been seen at the end of a Cal game.  When it finally looked like the players were calming down and moving towards the locker rooms we put the camera away and walked down the stairs.  But the players huddled, turned back towards the crowd and let out a hearty 'GO!'  We all quickly responded with 'BEARS!'  and we had the perfect capper on a perfect night.