As much as I love football and basketball, baseball has always been my favorite sport.  And yet for years I didn’t closely follow the exploits of my college team.  That speaks in part to how much Cal baseball struggled over the years and also to how little exposure college baseball gets generally nationwide and how little Cal baseball gets specifically in the Bay Area.  Games are televised once every other year, and you could only catch it on the radio if you lived within a 200 ft. radius of KALX’s broadcast tower.

In that context, Sunday night’s baseball game was an almost unbelievable revelation.  ESPN was on the scene.  Roxy Bernstein was in the press box announcing.  1,500 fans packed the house and I’m sure more would have been there if capacity allowed.  It felt like the eyes of the Bay Area, if not the country, were all focused on Cal baseball.  And the team justified that attention with another dominating performance and a joyfully cathartic celebration.  So join me on a photo journey of a truly special night for Cal fans!

First off:  Man, does Santa Clara have a nice facility.  For one thing, there was tons of free parking around the stadium.  We arrived 30 minutes before first pitch and found tons of empty spaces a few hundred feet from the ballpark.  Yet despite entering 30 minutes early the majority of seats had already been taken by excited fans, so we had to settle in down the first base line in the 2nd to last row.  Our seats were still great.  It’s a good model for Evans Diamond if the money can be raised – modest but modern.

The one flaw in our plan?  Being towards the top meant that we had no cover from a surprisingly strong wind blowing out to left field.  My first reaction was that the wind was excellent news for Cal’s right-hand heavy lineup to power balls over the fence.  But as the night wore on my wife and I just got colder and colder.  We even broke down and bought an XXL shirt from the ‘officially licensed NCAA merchandise’ booth!  (The NCAA, being typically grinchy, didn’t allow Cal to sell any of their own gear.) 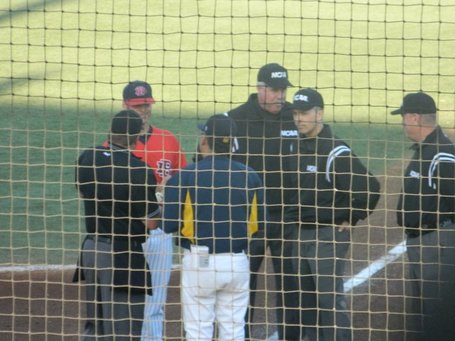 The lineup cards are exchanged, along with your typical pre-game pleasantries.

Despite the wind we settled in as the game began! 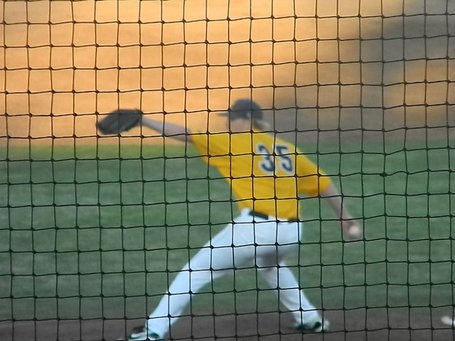 Erik Johnson gets us started

Frankly, after the top of the first inning I was pretty nervous.  Erik Johnson walked the first batter, then allowed three straight long fly balls that all seemed relatively well hit to me.  He was a little wild, and he was leaving the ball up.  If he kept pitching like that it was just going to be a matter of time before Dallas Baptist’s dangerous offense broke through.

But Johnson escaped the first, and then Austin Booker immediately drew a four pitch walk: 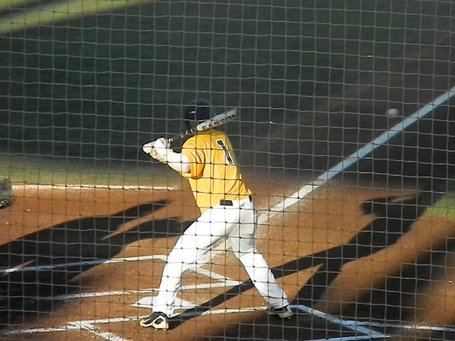 I'm thinking it was called juuust a little high

Tony Renda uncharacteristically swung at a few bad pitches before fouling out. 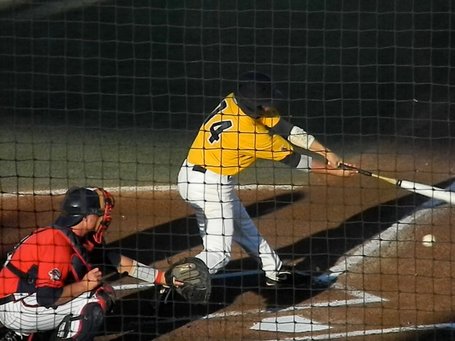 Your Pac-10 player of the year in action.

The walk proved important, because after Tony Renda fouled out, Chadd Krist did this: 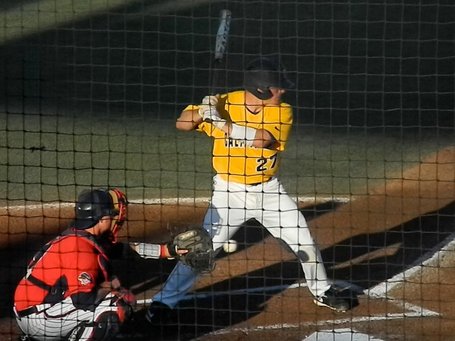 Well, first he took some pitches.  He's a patient dude, he'll wait for the pitch he wants 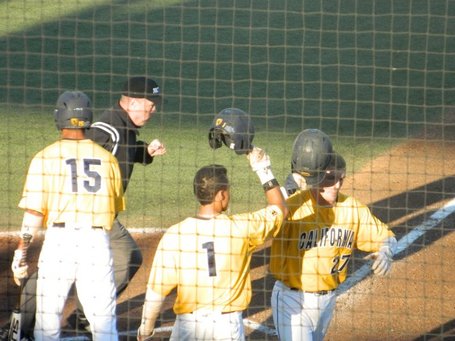 Told ya!  Loving the helmet tap celebration, by the way.

Based on descriptions of the home run I think it almost certainly would have been out of the park without aid from the wind, but the steady breeze made it look even more majestic.  2-0!

Of course, Dallas Baptist immediately bounced back in the top of the 2nd with a run of their own, but to me Erik Johnson looked much better.  His big mistake was a leadoff walk, but he was keeping his pitches down and the double that drove in the run was off of a pitch that looked well outside of the zone.  Sometimes you just have to credit the opposition – it was a great piece of hitting from DBU.  More importantly, Johnson rebounded for two straight groundouts to strand a runner at 3rd. 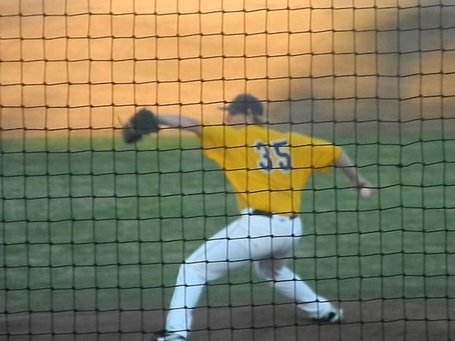 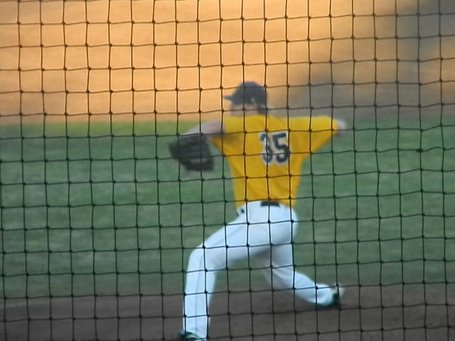 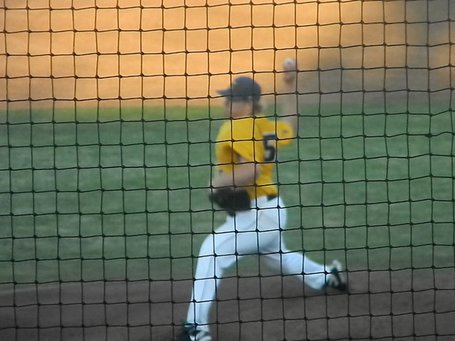 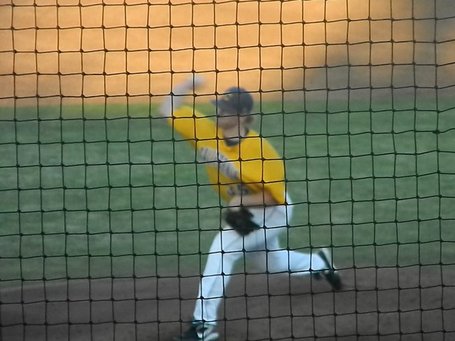 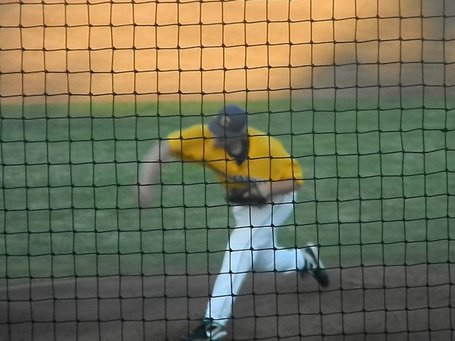 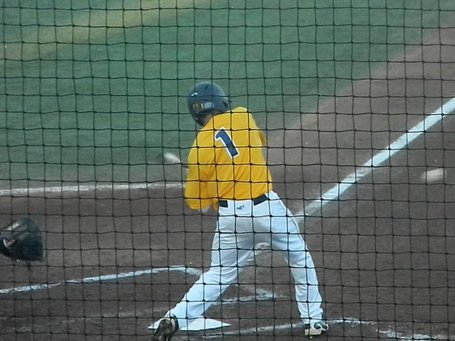 The above picture is from that AB, and I was pretty sure he went around.  But the home plate ump didn't call it, and Dallas Baptist shockingly didn't appeal to the 3rd base ump.  I'll take it!  But I'm not even sure if the picture captured his bat at it's furthest point before Booker checked his swing and it's already close.  A break!  And that break would be meaningful, because Booker doubled in a 2-1 count to drive in Campbell with the help of some iffy DBU defense.

In response, DBU dared* to brush Tony Renda off the plate! 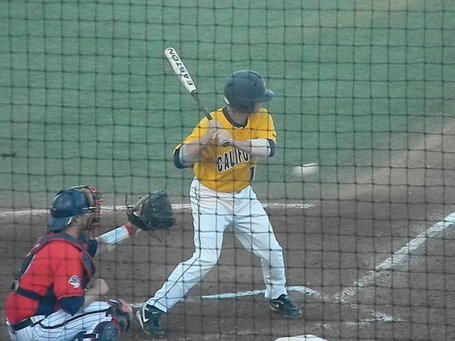 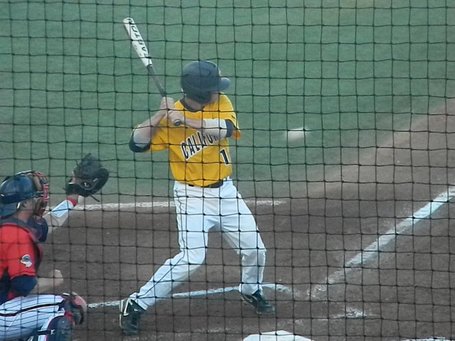 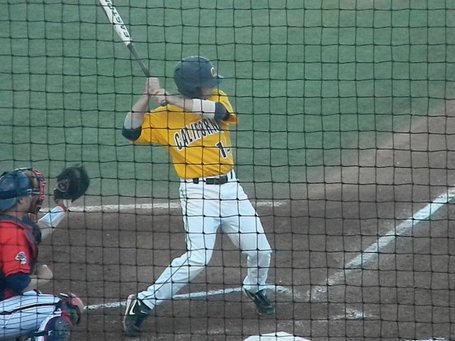 Tony responded by calmly stepping into the batter's box and giving the baseball a ride, but he got a little bit under the ball and sent it too close to DBU's rangy centerfielder, ending the inning. 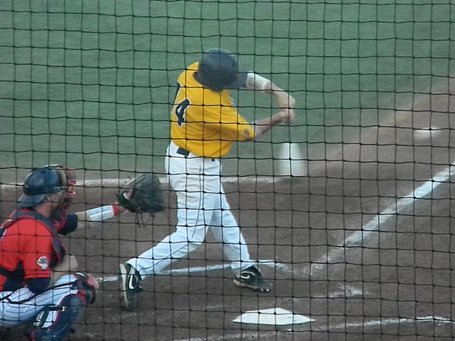 DBU would respond again with a run in the 3rd, though Johnson again ended the inning with a strike out to strand a runner in scoring position.  The Bears held just a 3-2 lead, and it felt like they were missing opportunities to break the game open, especially when the 3-4-5-6 hitters weren't able to get anything done in the bottom of the 3rd as Stafford struck out the side. 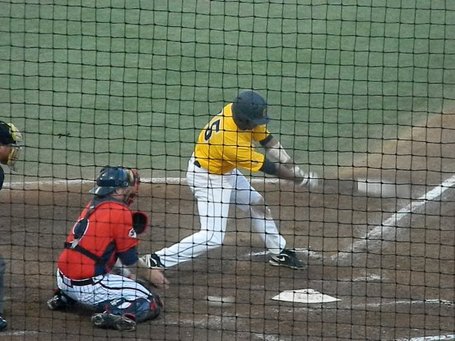 DBU had some momentum and Erik Johnson looked iffy.  Were the Bears in danger, or would they pull it out and celebrate a trip to Omaha?  Sorry, no spoilers for you - you'll have to come back for our next installment to see how things finished!