About nine months ago, the Cal baseball program was dead.

About four months ago, there was a glimmer of hope that the program would be revived.

About two months ago, the program was reinstated.

Next weekend, the once-dead program will play in the College World Series for the first time since 1992. 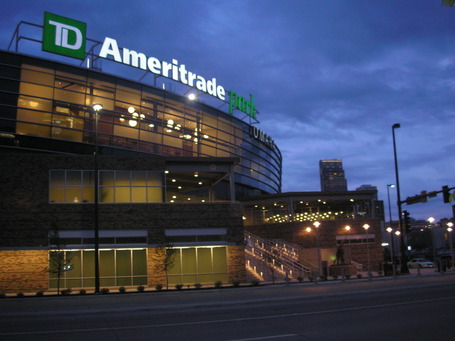 The new home of the College World Series:  Bear Territory?

The story of perseverance is as astounding as it is unbelievable.  Cal's improbable run at an NCAA baseball championship continued Sunday night as the Bears defeated Dallas Baptist 6-2 at Schott Stadium in Santa Clara to sweep the best-of-three super regional series and advance to the College World Series in Omaha, Nebraska.

After dominating Dallas Baptist 7-0 on Saturday in Game 1, Cal set the tone early again in Game 2.  Chadd Krist belted a 2-run home run to left field, only his second homer of the season, to give Cal (the home team in Game 2) a quick 2-0 lead in the bottom of the first inning.  It was a lead that the Bears would not relinquish.

That is not to say that Cal repeated its dominant Game 1 performance.  Dallas Baptist showed every bit of the fight that you would expect from a team playing in an elimination game.  But every time the Patriots inched closer, the Bears got themselves more breathing room.

Dallas Baptist pulled to within 2-1 in the second inning, but Cal got that run back in the bottom half of the inning when Derek Campbell scooted home from first on an Austin Booker double and an error by Dallas Baptist center fielder Landon Anderson.  Then after Dallas Baptist scored again in the third inning to pull within 3-2, Cal scored twice in the fourth inning on an RBI double by Anderson and an RBI single by Tony Renda.  The lead was 5-2 at that point and the Bears could smell the Omaha steaks.

Erik Johnson, the ace of the Cal staff and 2nd round selection of the Chicago White Sox, got the start for the Bears and kept Dallas Baptist at bay in his six innings of work.  Johnson struggled a little bit with his command (four walks in six innings) but got some big outs when he needed them -- none bigger than the strikeout of Kenny Hatcher to end the sixth inning, stranding two Patriots runners on the bases.  Though he walked four, Johnson gave up only three hits.  Dallas Baptist managed only four hits against Cal pitching on the night.  (Cal pitchers allowed only seven hits to Dallas Baptist in the two games of the super regional.)

Cal made the Patriots pay for their failure to score in the top of the 6th.  Krist brought home Cal's sixth run with an RBI single, which scored Booker to make it 6-2.  Cal missed a chance to break the game wide open when Mitch Delfino struck out with the bases loaded to end the inning (the second time in the game that Cal left the bases loaded),  but the Bears still enjoyed a four run lead with three outs to get.

To get those final three outs, Cal coach David Esquer went to the bullpen.  Cal's third starter, Kevin Miller, set down the Patriots in the 7th, and lefthander Kyle Porter, one of the heroes of the Houston regional, did the same in the 8th.  Naturally, in the 9th inning, Cal closer Matt Flemer entered the game to get the final three outs.

A flyout to right, a grounder to short, and a line drive out to second later, the Bears' unbelievable story got that much more unbelievable.  When second baseman Campbell caught Josh Wilson's line drive to end the game, the Bears had clinched their first trip to Omaha since 1992, when the likes of Jon Zuber, Troy Penix, Chris Clapinski, Geoff Blum, Matt Luke, and coach Bob Milano (just to name a few) led Cal to an also improbable run through the regionals.  In 1992, Coach Milano's team lost its opening game of the East Regional, then won four straight to get to Omaha.  In 2011, Coach Esquer's club lost its opening game of the Houston Regional, and have now won six in a row to get to Omaha.

Not bad for a team that was supposed to be eliminated nine months ago.