NCAA Men's Golf Championship, Day 2: Might We Have An NCAA Individual Champion In Our Midst?

Share All sharing options for: NCAA Men's Golf Championship, Day 2: Might We Have An NCAA Individual Champion In Our Midst?

The second round of the 2011 NCAA Men's Golf Championship is now in the books, and Cal's hopes for a team championship are looking rather dim.  The Bears shot an 11-over par 299 as a team -- one shot better than Tuesday's first round result -- but fell from a tie for 14th place to a three-way tie for 16th with Florida and Michigan.  Cal trails the all-important 8th place spot (held by Texas A&M and Ohio State) by nine shots heading into Thursday's final round of stroke play, which will determine the top 8 teams to qualify for the match play round.

Overall, after two rounds of play, Cal stands at +23 over par, a distant 26 shots behind first-place Georgia Tech. 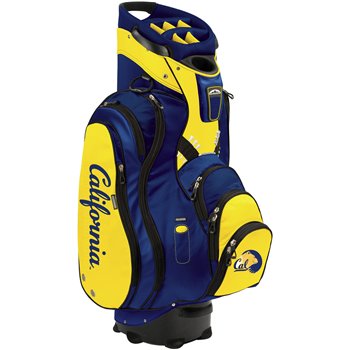 While the Bears' chances for a team championship look bleak, the same cannot be said for their chances at having the school's first-ever individual champion crowned. Cal sophomore Michael Weaver played his second solid round in a row, shooting his second straight 1-under par 71.  Weaver made five birdies on Wednesday, helping to offset a costly double bogey on the 2nd hole.

Through two rounds, Weaver is tied for 6th and just three shots behind leader John Peterson of LSU.  Peterson shot the day's best round, a 7-under par 65, to climb from a tie for 47th after the 1st round to holding a one-shot lead heading into Thursday's final round of individual medal play. 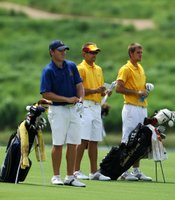 Cal's Michael Weaver (in blue) surveys a shot as his playing partner and an assistant coach from USC look on.

For the second straight day, sophomore Max Homa carded the Bears' second-best round of the day.  Homa followed up his 1-over par 73 in the first round with a 2-over par 74 on Wednesday.  Homa, who like all of the Bears started his round on the 10th tee, eagled the par-5 18th hole to score an even-par first nine.  Homa stumbled coming in, however, making bogey on both the 8th and 9th holes to cost the Bears two strokes coming home.

After carding the Bears' worst round on Tuesday, 2010 Pac-10 champion  Eric Mina rebounded with a 4-over par 76.  Mina's round was all the more impressive considering he shot 3-over par for his first three holes, with a double bogey on the 10th hole and a bogey on the 12th.  Mina eagled the par-5 14th hole to gain momentum and was able to tread water the rest of the way.  Mina's round ended up being one of the Bears' four best of the day and counted toward Cal's second-round team score.

Freshman Ben An shot a 6-over par 78 and provided the Bears' final individual round that counted toward the second-round team score.  An improved upon the 81 he shot in the first round.  Unfortunately for the Bears, senior Stephen Hale could not repeat his first-round performance: after shooting a 3-over 75 on the first day, Hale could not get it going in Wednesday's second round, making triple bogey out of the gate at the 10th hole en route to a 9-over par 80.

Cal resumes action on Thursday.  The Bears, along with Florida and Michigan, will tee off at 8:20 am CT (6:20 am PT).  The 54 holes of stroke play conclude Thursday, with an individual champion to be crowned after Thursday's third round.  The top eight teams will begin match play quarterfinals on Friday.