We're talking softball today! The Cal softball team is red hot, shutting down Kentucky en route to success at the Women's College Softball World Series. Now, tomorrow, at 10 AM PST, they take on highly touted Alabama. Well, the softball team isn't the only thing at Alabama that is highly touted. They also have one of the most popular and best run SBNation sites, RollBamaRoll.

We contacted them to talk softball and reader rugman11 was more than kind to answer some questions for us. This should be a tough matchup for Cal, Alabama has 51 wins and only 9 losses on the year. They just dispatched our friends from that Junior College in the south bay. Keep it locked here for the open thread tomorrow as we all cheer on the Golden Bears! Many thanks to rugman11 and RollBamaRoll for helping us better understand what Cal softball will face starting tomorrow. If you want to help with Alabama tornado relief, click here to donate. Every little bit helps! Go Bears!

Pitching, pitching, and more pitching. Senior Kelsi Dunne is wrapping up her best season in a career that will end with four All-SEC and likely four All-American honors as well as a pair of SEC Pitcher of the Year awards. She ranks tenth in the nation in both ERA (1.15) and K/7 (10.2) and finished either first or second in the SEC in ERA, Batting Average Allowed, Innings Pitched, Strikeouts, Strikeouts Looking, and Wins.

Dunne isn't the Tide's only pitching stud, however. Freshman Jackie Traina has made a huge contribution, putting up a 1.28 ERA and 8.7 K/7 in 23 starts. Comparatively, last year's starters not named Kelsi Dunne had a 2.95 ERA in 29 starts. Traina's impressive rookie performance has allowed Alabama to put up the third-best ERA in the nation (1.35) and has turned the Tide into the best pitching staff in the SEC.

2. Who's going to pitch for 'Bama in WCWS and what makes her dominant?

Kelsi Dunne will almost certainly start for the Tide and, while her stuff is not overpowering, her pitches have too much movement for most hitters to get hold of. Dunne's fastball tops out in the mid-60s, but she has six other pitches that move to all areas of the plate, preventing opposing hitters from sitting on the fastball and forcing a lot of protective swings. One thing that has plagued her over the past few years has been control problems. She walked a career high 103 batters in 215 innings her sophomore year but has managed to bring that number down the past two seasons. She's still walking just over two batters per seven innings and has led the SEC in hit batters the past two years, which puts too many extra runners on base. Fortunately, the fact that about half of her outs are strikeouts (309 of 637), combined with giving up only 16 extra base hits all season has allowed her to keep those extra runners from scoring.

When she's on, Dunne is literally unhittable (9 career no-hitters including back-to-back no-hitters in the 2009 Super Regional) and she's given up more than three earned runs only twice all year, so Cal will need to bring its best game in order to dent her armor.

It's tough to say that a two-time High School All-American and 2008 High School player of the year has been overachieving, but I don't think anybody expected Jackie Traina to come in as a freshman and dominate the way she has. She hasn't racked up the strikeouts like Dunne, but her 19-5 record and 1.28 ERA have given the Tide a pair of aces on the mound and given Alabama hope that there will be life after Kelsi Dunne. Even setting aside her pitching accomplishments, she's made a huge contribution to the Tide offense, batting .354 and leading the team in homers (13), slugging (.701), and OPS (1.185).

Amanda Locke stepped up big in conference play when others, including Traina, started to slump. The junior 1B/DP hit .352 with 6 homers against SEC competition after batting .259 with only 4 homers in the non-conference slate.

The biggest disappointment has probably been Jazlyn Lunceford. It looked last year like she had turned the corner, batting .303 with 10 homers, but this year she hit only .258, though she was one of the few Tide batters who performed better during the conference season, as she posted a .286 during SEC play.

4. Who will be 'Bama's surprise of WCWS?

Leaving aside the pitchers (because nothing they do would surprise me) I'll have to go with either right fielder Jaz Lunceford or center fielder Jen Fenton. I like Jaz because she's always been solid come playoff time. Granted, it's a small sample, but in the past three seasons she's 11-36 with five runs and 10 RBI in the playoffs, including a two-out, pinch-hit grand slam against Arizona State in the 2009 WCWS.

Fenton is a different case. She's been phenomenal this season, but somewhat overshadowed because she's not quite the best at anything she does. She hits well (.348), but not well enough to lead the team (Kayla Braud hit .440). She's fast (32 steals), but not the fastest (Braud has 58). She has pop (19 extra base hits), but not the most (Whitney Larsen has 28). What she has been is an incredibly solid performer and a consistent bat out of the second spot in the lineup who went 8-for-13 with nine runs, six RBI, and a homer during this year's Regionals and Super Regionals.

5. What was 'Bama's signature series this yr & why?


There are really only two options here. First would be the LSU series in April when the then top-ranked, 37-2 Tide got swept in three games. Nothing was really amiss on the pitching side but control. Dunne gave up four runs (three earned) on 11 hits with 18 strikeouts in 19 innings while Traina allowed three runs (just one earned) in nine innings. But the offense and defense both let the Tide down, managing only 2 runs in 31 innings (the first two games went 14 and 10 innings respectively), while a throwing error and a passed ball in the final game led to two Tiger runs despite Traina and Dunne combining for a no-hitter in the loss. This series, the nadir for Alabama this season, showed the Tide that they are not invulnerable and that if they don't keep their heads in the game (4 errors, 10 hit batters, and 5 walks in the series) they will struggle.

The second defining series would be the Super Regional win over Stanford. After last season's devastating two-out, walk-off homer by Hawaii to end the Tide's season (after Alabama had won the first game of the Super Regional 8-0), it was nice to get some measure of payback, even if it was against Stanford this time. After dropping the first game of the series 5-2 (thanks mostly to 4 walks and 3 errors), the Tide bats came out in Game Two, a 10-0 win, while Dunne and Traina locked down the Stanford offense in the final game, putting together a four-hit (and no-walk) shutout. Winning that way gives both the offense and the pitching staff confidence heading into the WCWS.

6. Tell us about Coach Patrick Murphy. What makes him a great coach?

I honestly haven't seen enough of his interactions with the players and coaching staff to give you a precise answer to this, but the man just wins. Alabama has made the NCAA Tournament in each of his 12 seasons as head coach, they've topped the SEC West in each of the past six years, and have compiled three SEC titles as well as four SEC tournament championships, including winning both in each of the past two seasons.

7. What is Alabama's softball history like? And how has the SEC historically been in softball?

I wrote a much more detailed post about the history of SEC softball at Roll Bama Roll a couple of years ago, but the gist is this: softball was slow to develop as an SEC sport (first officially recognized in 1997) but it has blossomed in recent years because of weather and money. As with the west coast, the weather in the southeast is conducive to year-round play, which has had a huge role in developing high school talent. When they began, most SEC programs recruited heavily in California and Arizona. While some still do (all but one player on Florida's roster is from California or Florida), the increased visibility brought to softball and the southeast, combined with the weather, has allowed SEC teams to build national championship caliber programs by recruiting locally (13 Tide players hail from Alabama, Georgia, or Florida).

The other big factor has been money. The success of SEC football, both of individual teams and of the conference as a whole, has brought a great deal of money to other, non-revenue, sports, allowing them to improve their facilities and attract more talent. At Alabama for example, in the last five years the stadiums for baseball, softball, volleyball, and women's basketball have all received major renovations, and that's not including the 2004 construction of the soccer complex and the 2010 expansion of men's basketball facilities.

The SEC still has a quite ways to go before it catches the PAC-10 in terms of softball success. The conference has yet to produce a national champion, with Tennessee in 2007 and Florida in 2009 coming the closest, both losing in the championship round. But no conference has put more teams in the WCWS semifinals in the past six years than the SEC (10) and they have a decent chance of putting two teams in the semifinals for the fourth consecutive year with two of the top three teams remaining (2nd-seeded Alabama and 4th-seeded Florida).

Alabama has been on the cusp of a national title for the past several years, losing in the semifinals in both 2008 and 2009. Hopefully, this will be the year we break through but, as usual, at this point in the year it's anybody's game.

6. Non-softball: How did kelph's road trip of supplies from Los Angeles to Alabama end up? 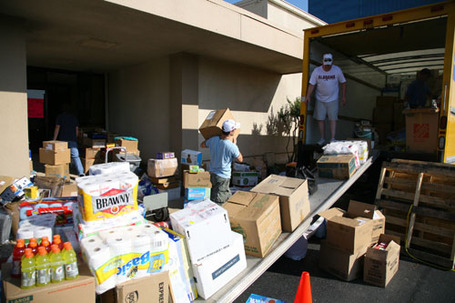 It was a grueling six-day, 2,000-mile ordeal. But the driving was the easy part. We had folks in California, Arizona, Texas and Louisiana who really stepped up and collected the supplies it took to fill the truck. Logisitics for it all was handled by the good people at Toomers for Tuscaloosa. All I had to handle was the exhaustion of driving it across the southwest punctuated with moments of terror of having the wind catch the back of the damned thing coming into El Paso.

While the trip succeeded getting the goods to Alabama, that's not the ultimate goal we were trying to achieve. The real difference between sports sites like Roll Bama Roll (and CGB) and the legion of others is they are as much a community for the users as they are an information resource about a given school's sports. The whole point of The Sunshine Express was finding a way to use that to help out in a time of need. There a lot of people across the country who have now been put in contact with each other and are set to keep helping Tuscaloosa and Alabama in the rebuilding process over the months to come.