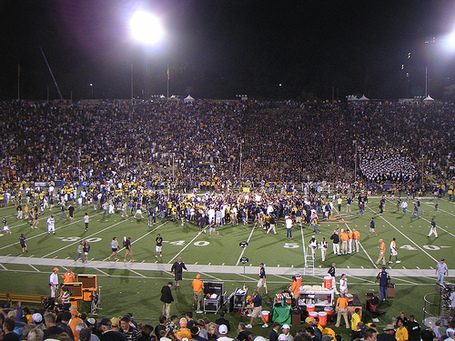 Under the current Pac-12 television deal, one of the ways Larry Scott managed to secure a larger TV contract was allowing a handful of games each season to be played on the ESPN family of networks, particularly on weekday nights in exclusive time slots. There's a lot to like about these primetime games, but there are also genuine concerns that need to be addressed.

Obviously, in terms of national exposure, this is good for the conference. The Pac-12 gets more games on TV, and gets to be seen by college football fans all over the country. It's a big step for a conference that's spent too many years dawdling in the doldrums of visibility.

However, I'm also interested in the football aspect of these games, and I don't want to tax our football players too much. Short weeks are hell for college football players and coaches. Adjusted practice time, adjusted dates, more academic juggling, etc. etc. It throws everything out of whack, especially at a difficult institution like Cal. Even if Cal and the opponent are provided bye weeks, you could see some very sluggish games with all those unorthodox shifts.

And let's think about the people buying the seats in the crowd. A good portion of them are transplants from outside the Bay Area, and might have to give up their seats because it's harder to justify a weekday excursion to watch the Bears. Not to mention students might be less inclined to show up on a weekday night considering the various cultural and academic activities students partake in on the weekdays (remember, Cal is not your typical football school). Will there be a windfall in ticket sales if we have one or two weekday night games? It's not an inevitability, but it's not out of the question either.

In the end, I'm ok with Thursday/Friday night games at Memorial Stadium. But we might be sacrificing some quality in team performance and stadium noise by going this way.