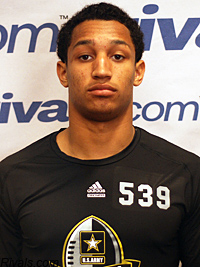 The California Golden Bears received their second verbal of the 2011-12 recruiting cycle when they landed a local prospect from Tosh Lupoi's old hunting grounds up in Concord. Defense might not be the focus of this 2012 recruiting class (certainly not at linebacker, where we've stacked up), but Barton provides depth and stability at a position that the Bears have struggled at recruiting at the past few seasons, and will ensure that we don't have too many problems with attrition in upcoming years. I'm not certain whether Cal will slot him at outside or inside linebacker--he played outside in college, but also has good run defense instincts that could suit him well on the inside.

Barton was part of a defense that gave up only ten points a game last season, and he led the way with a team-high 72 tackles and chipped in three sacks too. He attended the US Army All-American combine in San Antonio last January, and is likely a strong contender to return next year. For more on his commitment, Ryan Gorcey of Bear Territory has this writeup ($).

After the jump, his junior and sophomore highlight tape. He looks like he could be an outstanding hitter on special teams.