NCAA Men's Golf Championships, Day 1: Cal Tied For 14th, With Plenty of Work To Do

Share All sharing options for: NCAA Men's Golf Championships, Day 1: Cal Tied For 14th, With Plenty of Work To Do

The Cal men's golf team finished Tuesday's first round of the NCAA Championship tournament in a tie for 14th place (out of a 30-team field) after posting a team score of 12-over par 300 at Karsten Creek Golf Course in Stillwater, Oklahoma.  Cal is 17 shots behind first-place Georgia Tech after the first round, but the important number is 8: that is how many strokes Cal trails 8th place Oklahoma State.  The top eight teams after Thursday's final round of medal play will advance to match play to decide the team champion. 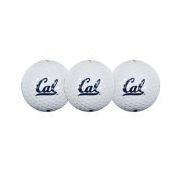 Cal's Michael Weaver, a sophomore out of Fresno, shot a 1-under par 71 to lead the Bears.   His score puts him in 9th place in the individual competition, just four strokes behind tournament leader James White of Georgia Tech.   Weaver shot even par on the front 9 of the challenging Karsten Creek Course, with a double bogey at the par-3 7th hole the only blemish on his card.  Weaver had a more adventurous back 9, bogeying the 11th and 16th holes, but managing birdies on the par-4 10th, the par-4 12th, and the par-5 18th to close at 1-under par.

MIchael Weaver shot a 1-under par 71 to pace the Bears.

Sophomore Max Homa was in shouting distance of Weaver's score, as he posted a 1-over par 73.  Senior Stephen Hale also helped the Bears' team score with a decent round of 75 (+3).  Homa's otherwise solid round was marred by a triple-bogey on the par-4 13th, which cost him a chance to crack the top 10 individually; as it is, Homa's 73 places him in a tie for 34th after the first round.

Under the competition rules, the team's top four scores count toward the team standings.  Unfortunately, and rather surprisingly, the remaining two Cal golfers had forgettable rounds at Karsten Creek.  Freshman Ben An, the 2009 United States Amateur Champion, made seven bogeys and two double bogeys on his way to a 9-over par 81.   And senior Eric Mina, the 2010 Pac-10 individual champion, had an even worse day, making no birdies on his way to a 12-over par 84.  An's score, as the better of the two, was the one that counted towards the Bears' first-day total of 300 (+12).

Cal had the early morning tee time on Tuesday and was in 16th place at the conclusion of its round.  The afternoon proved to be kind to the Bears, however, as other teams fell down the leaderboard and inched the Bears up to a tie for 14th place with Florida and the University of San Diego.

The Bears will resume play in Round 2 on Wednesday with a tee time of 12:20 pm CT (10:20 am PT).  You can follow the live scoring action and the leaderboard here.