I go to lots of sporting events, and as a general rule, if Cal is competing for a national title less than 30 minutes away from where I live I'll attend.  So with my wife/loyal photographer, we departed to the Sacramento State Aquatic Center and Lake Natoma.  There 16 teams and 48 total boats gathered for a series of 2,000 meter races - somewhere between six and eight minutes of pure aerobic torture.

The entire event took place from Friday through Sunday, but the first two days were spent on a series of preliminary races.  And luckily for late-risers like myself, the earliest races Sunday morning were the Division II competitions.  The main events would begin around 10:00.  We drove out to find that the main parking lot was already full and followed a series of signs to find the overflow lot a rather long way away from Lake Natoma - clearly crew was more popular than I anticipated!  Luckily they were prepared - a shuttle bus made regular loops to take people from the overflow lot right down next to the NCAA tent.  There we met CalBear81, CalBear81's posse and Katster, and a nervous day of boat watching began. 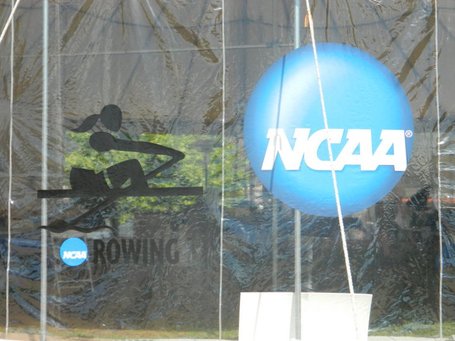 The NCAA had a pretty sophisticated setup along the finish line.  There was a huge temporary tent with neat work stations and computers and all kinds of other technology.  That included a reasonably impressive video screen and a few occasionally idiosyncratic announcers that did a good job keeping us informed when the races weren't anywhere near the spectator viewing area. 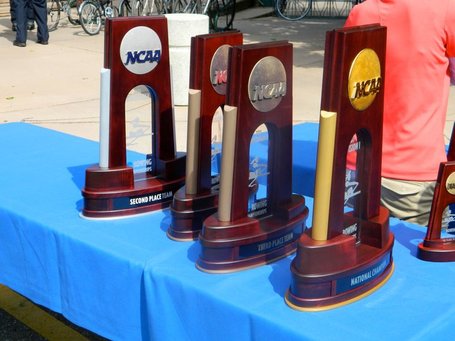 As the races were going on officials were setting up trophies for the post-race awards ceremony.  One of these trophies will be headed back to Berkeley, and as it turns out, mere thousandths of a second would decide where each one of these went.

After glancing at the swag we headed down to the shore near the finish line.  We came in knowing very little, but we did have a few facts:

2 - Only three teams got all three of their boats into the final heats:  Cal, Stanford and USC.

So with that we awaiting the Varsity 4 final, in which CalBear81 informed us that Cal was the heavy favorite.  For more on Cal's V4 crew, check out this profile of Becca Lindquist in the Sacramento Bee. In the meantime, Brown won the petite final (composed of the 7th-12th qualifiers) which seemed insignificant at the time.  Foreshadowing alert:  It wasn't.

Soon afterwards the 4s Grand Final began, and the announcer made it clear that Cal took the initiative early and led the entire way.  Domination.  It was the only final race that didn't feature massive drama.  Take a look at this gap: 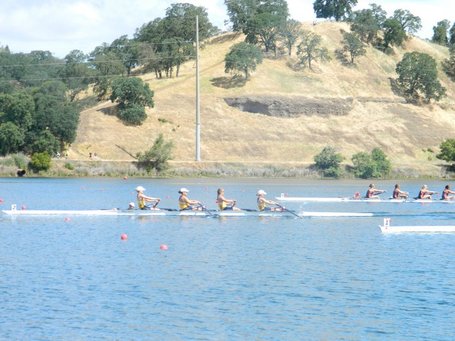 Not quite a full boat length, but pretty close.  Here's some video, courtesy of CalBear81's posse:

Our favorite part:  "It is California, looking Golden!" 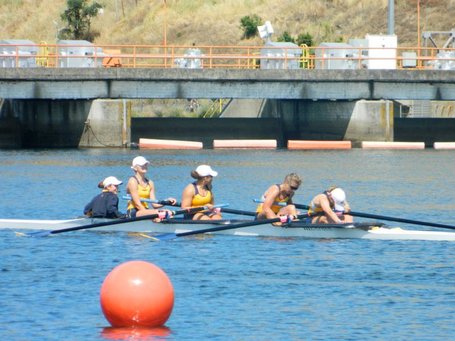 Even when you win a national title it's hard to find the energy to celebrate after 7:09.6 minutes of constant exertion.  Although the coxswain looks pretty chipper! 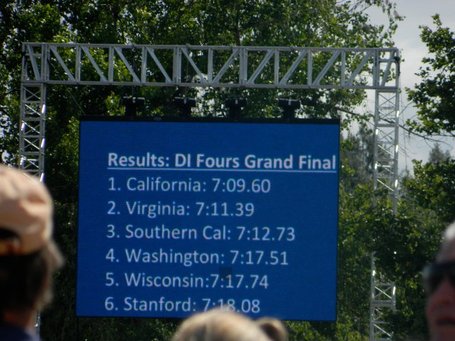 Frankly, as we were listening to the announcers describe the race, we started worrying more about how Stanford and USC were doing, since they seemed to be our main competitors.  As I recall, for most of the race Stanford was in 4th, but over the last few meters they faded and Washington and Wisconsin both passed them.  This was huge!  Our rivals (both historically and very specifically for the national title that day) had finished last in the same race the Bears finished 1st in!  Party time! 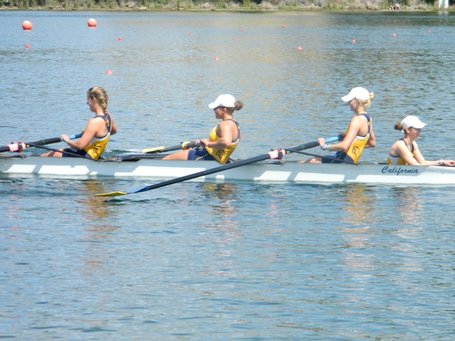 Interestingly, after finishing the race the boats had to turn around and row back past the spectators to get back to some unseen point to come back on shore.  This gave Cal fans a chance to cheer and shout 'Go Bears' to the appreciative but still exhausted athletes.  This journey seemed particularly cruel to the boats who didn't win.

With the conclusion of the 4V final we had to sit and wait through two consolation heats  of Junior Varsity 8 races.  We began noticing that only a few conferences seem to have any type of rowing success.  Of course there was the Pac-10, which had a whopping five teams competing - Cal, Stanford, USC, Washington and Washington St., who interestingly were technically hosting the event and had a very enthusiastic rooting section.  Kudos, Cougs!  There were the Ivies: Yale, Brown, Princeton, Harvard and Dartmouth.  There were Big 10 schools Michigan, THE Ohio St. (as the announcer continually reminded us) Michigan St. and Wisconsin.  And from the ACC there was Virginia and Clemson.

Finally the JV8 final began and we nervously listened as the announcers described Stanford pulling away from the pack.  But Cal was in a tight competition with Brown and Ohio St. for 2nd for much of the race.  As the boats quickly approached the final stretch Brown pulled away from Cal but the Bears beat out the Buckeyes.  We were happy as USC was very narrowly edged out by Virginia and finished last. 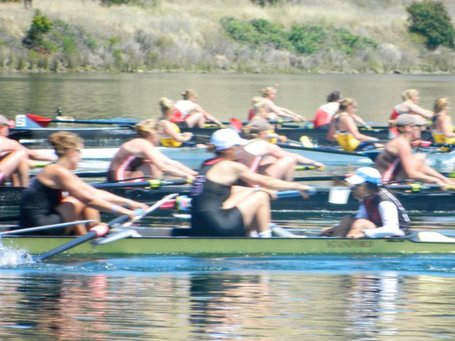 It was a difficult-to-decipher jumble of swaying torsos and surging oars at the finish line, but Cal was usually easy to pick out because of their stylish Gold tops.

At this point, we began trying to figure out where Cal stood.  We knew that the Bears had a first and a third.  Stanford had a first and a sixth.  USC had a third and a sixth.  Virginia had a second and a fifth place finish, but they didn't have a boat in the Grand final, so they couldn't be a factor, right?  So Cal must be winning, and perhaps by a wide margin!

I took to my wife's iPhone and finally found the scoring system.  After some quick math I was pleased to discover that Cal was indeed in first place going into the final race.  But the margin was much smaller than one might guess, and that's because crew weights the races quite differently.  Cal got 16 points for their first place finish in the V4 race.  That sounds pretty good, until you find out that Stanford got 32 points for their first place in the JV8 race!  The JV8 race was weighted twice as much as the V4 race, and the Varsity 8 race was by far the big fish, with three times the weight of the V4 race.  The winner of the final race would take home a whopping 48 points.

So the standings after two of the three races were as follows:

We had dismissed Brown because they didn't even make the Varsity 4 boat finals, but since they won their consolation heat they only lost 1 point on Stanford and 6 on Cal.  They were right in the thick of things!  We quickly did some math and realized what Cal needed to do:

1. Beat Stanford.  By one spot or five, it didn't matter.
2. Finish one spot behind Brown or beat Brown.
3. Finish two spots behind USC or better (or beat them).

We didn't think that USC would be a factor because the Bears beat the Trojans relatively decisively at the Pac-10 title.  And Virginia wasn't a factor because they didn't make the V8 grand final.  Brown was the unknown factor.  And Stanford was the very known factor:  Cal beat the Cardinal by just 5 tenths of a second at the Pac-10 championships.  The national title was going to come down to inches and milliseconds.

The other team that might be a factor was Princeton.  The Tigers weren't in the running for the team title, but they had what was generally expected to be the best Varsity 8 boat in the last race.  Would that impact proceedings? 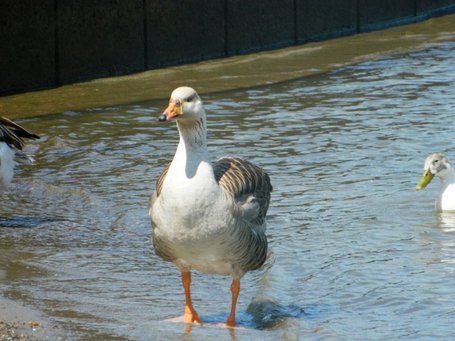 Even the Ducks felt the gravity of the situation

The race started out perfectly for Cal.  Princeton jumped out to an early lead, but that was no concern - Cal just needed to beat Brown and Stanford.  And for the entire first half of the race that's exactly what they did.  For a long stretch, Stanford was lagging in 5th place.  Briefly the Bears even passed Princeton's vaunted boat to take first place.  The Blue and Gold faithful let out a roar when the announcer told us that Cal had surged into the lead.  A national title was there for the taking.

But suddenly things changed.  Princeton surged back ahead, which didn't seem significant.  But soon Brown pulled even, then passed Cal somewhere around the 3/4 mark.  That was OK - Brown wasn't going to pass Princeton and Cal could finish one spot behind them and still claim the team title.  But then Stanford surged into 4th, then 3rd, then 2nd as they raced Brown towards the line.  It all culimated this this:

For a long period of time, confusion reigned.  Cal had seemingly been passed, but there were photo finishes and doubt.  If the order of finish was Brown-Cal-Stanford, the Bears would win the national title.  If it was Stanford-Brown-Cal, it would go to the Cardinal.  And if it was Brown-Stanford-Cal, then it would be a tie! 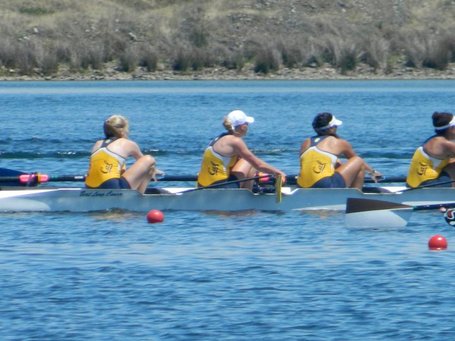 Cal's Varsity 8 boat, likely knowing what those on the shore weren't sure of yet.

Finally, it was confirmed:  Brown had edged out Stanford by 5 hundredths of a second, with Cal finishing 4th behind them.  That meant that Stanford and Brown had tied with 82 points, leaving Cal in third with 80.  How is a tie broken?  Order in the Varsity 8 Grand Finale breaks a tie, meaning that the same 5 hundredths of a second that forced the tie, broke the tie.  The national championship was headed back east with Brown.

As it turned out, a few key moments swung the national title.  Brown's victory in the V4 consolation race was absolutely essential, and Stanford's failure to finish any higher than last in the V4 final also cost them the title.  For Cal it all came down to the fade in the final race.  Had the Bears gone out too fast, perhaps trying too hard to compete with the Princeton boat that ultimately won the final race?  Did Stanford and Brown just simply have better days at the right time?

I don't have an answer, but I will say this:  Cal was the only team to finish 4th or higher in every single race.  For that matter, no other team even finished 5th or higher in every single race.  I'm too much of a novice to truly question the scoring system the NCAA uses, but in my mind the Bears demonstrated, as a team, the greatest depth and breadth of any school competing at the championship.

But that misses a more important point.  Despite the last second disappointment, it was another stellar year for women's crew, including a Pac-10 championship and a fine, fine showing at the NCAA tournament.  Congratulations to Cal women's crew, another team that should make any Cal alum proud.  Go Bears!