Trojan Horsed: Now On Sale! (Plus Robert Woods Is Good At Football)

Share All sharing options for: Trojan Horsed: Now On Sale! (Plus Robert Woods Is Good At Football)

After the jump, an FAQ, plus a small snippet of the e-book which you can again buy by clicking here. Hope you all who purchase it enjoy it!

Can I buy this on Amazon and have it shipped to me?

For now, no. If this book starts selling like hotcakes, I might consider distributing this more widely and putting it in print form, but for now I prefer the e-Book/PDF way.

Can I read this on a mobile device?

Definitely on a Kindle. Here are the instructions from Amazon.

Your Kindle can now display PDF documents without losing the formatting of the original file. Send PDF documents directly to your Kindle (via your @Kindle address) or drag and drop PDF files from your computer to your Kindle (when connected via USB). You can also magnify PDFs by viewing them in landscape mode.

I'm fairly certain you can read this on most mobile devices if you have some sort of PDF reader. I'm not sure how comfortable it'll be with the diagrams though, so I'd recommend something like a Kindle that's comfortable for PDF viewing.

I have no interest in reliving this game again. Why should I buy this?

1) The better this publication sells, the likelier the chances are I'll have more time to write more of these on other games, players, and teams. Which means happier games and happier events. In fact, the next project in the works involves a certain #1 team we nearly beat in the near past. I'd sure want to read that sooner rather than later. Wouldn't you?

2) This will help to further ensure more high-quality content at CGB in the near future and more potential breakdown of gamefilm for free! We all know how much you guys want to learn more about our football team, and watching the tape is the best way to do it. HOWEVER, gamefilm posts are the most time-intensive posts to write, and as much fun as I have writing them, it'd be easier to write more of these if we all felt financially secure writing about football. Consider this your donation to keeping CGB a healthy, happy, sexy lady.

3) Forget about you. Think about me. I had to rewatch every awful play of this awful game over and over. You're paying for my psychiatric bills here!

If I refer other people to this book, can I get a discount?

Haha, sure. If the person you refer buys it, emails me (bearsnecessities at gmail), and says you sent him, I'll take 10% off the original price and send it back to you via your PayPal address. If you send another person to the book and does the same dance, you get another 10% off the discounted price, and so on. (Cal football students, this is your way to get this thing cheap! Learn about the Bears and procrastinate on dead week!).

Is there a place I can provide feedback?

Yes. Go to this Google Form and leave your general comments. I'll take them into consideration for my next book. I'm learning along with the rest of you.

Can I get a sample, just to see what I'm in for?

Here you go! Feel free to break down in the comments.

Sample Play: First USC Touchdown (this is word-for-word from the book) 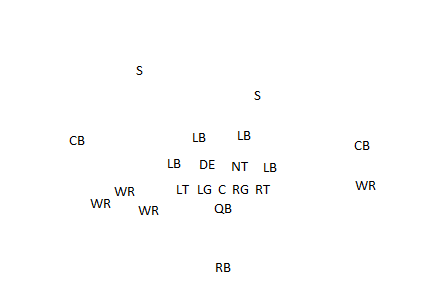 USC: Aces trips left (TE lined up as a WR)
Cal: Nickel formation 4-2-5, with two down linemen DEs ( Cameron Jordan and Aaron Tipoti) lined inside, Mike Mohamed as the left outside linebacker, Mychal Kendricks on the right.

0G-Barkley, Matt pass complete to 13-Woods, Robert for 16 yards to the CAL0 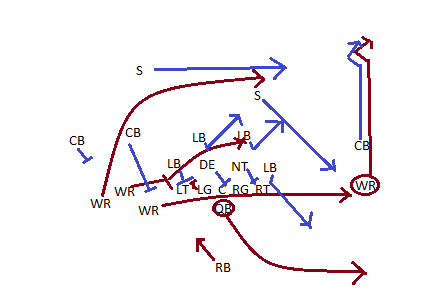 USC fakes the toss left and runs bootleg right. This is where the limitations of Cal's pass rush catch up with them. Mike Mohamed is a formidable linebacker, but he’s no pass rusher, particularly on a play like the bootleg. He bites on the run and doesn't have the footspeed to switch back and catch up with Barkley rolling right.

Great throw by Barkley, great catch by Woods. Marc Anthony tries jamming Woods at the line of scrimmage, but Woods leverages to the outside by leaning his body left and seemingly running a go route toward the end zone. Anthony is good at covering Woods up, but he seems to be running with Woods rather than following his body. Anthony also isn't able to look back for the football while guarding Woods, so he doesn't have great ball awareness on the play and can only guess when Woods is getting the ball based on watching his hands (not the best way to defend a pass).  Anthony even holds Woods's jersey for a second or two and gets away with it, but Woods STILL makes the play on the throw from Barkley, cutting at the last second to the front corner of the end zone. Good job by quarterback and receiver here, although ball awareness could have been very useful in defending the play.

On the backside of the play, Bryant Nnabuife comes in and tries to stuff the play at the line of scrimmage. He vacates his zone, leaving Chris Conte with the duty to guard the outside receiver running the deep bootleg route into the end zone. If Nnabuife had stayed back and watched for Johnson, Conte might have been able to provide more support for Anthony and Nnabuife and the pass might have been better defended.

Other than the freed Mohamed, no one else has a big impact on this play. Jordan switches onto the right side and disengages more easily from Kristofer O'Dowd. Tyron Smith bullies Tipoti around.

So I hope you enjoy this, or at the very least, learn something about this. It wasn't easy to make, but I did this because I love sports, I love learning about sports, and I want to help everyone else around me feel similarly. I hope this is one small step in that mission.

Thanks everyone, and go Bears.