We got another big matchup. Former footballer Deltha O'Neal (aka the entire Cal Offense in the 1999 Big Game) taking on Superbowl Champion Desmond Bishop. Tough choice!

You can see the full bracket here. Voting ends this Friday at noon, so go vote. Full write ups after the jump. GO BEARS! 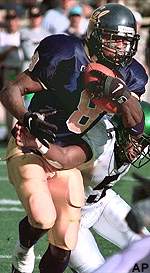 Twist wrote: The Fiery Emotional and Vocally Inspiring Leader - this type of leader is emotional. He'll also have big time emotional celebrations after a big play, inspiring his teammates with confidence and energy. But what makes this type of leader different from the Fiery Emotional Cocky Leader is his ability to emotionally pick up his players. He's the one prowling the benches, screaming, and inspiring his teammates with words and speeches to find the heart within them to play harder and not quit. An example of this type of leader from last year's team would be Desmond Bishop.