Share All sharing options for: Remembering The Seniors: Markhuri Sanders-Frison

TwistNHook:  We only have one senior on the men's basketball team this year, Markhuri Sanders-Frison.  He was only with the Cal team for two years, but in that time he helped Cal win its first Pac-10 championship in decades and developed into a very dependable inside threat.

Here are the numbers for MSF on his career:

There are a lot of great memories associated with Markhuri Sanders-Frison.  What are yours? 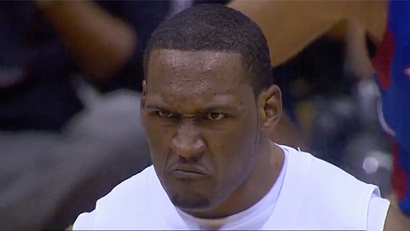 Avinash:  It's surprising how efficient MSF was down on the block considering he had maybe one go-to move on the post. He'd take the ball, dribble it once, and either turn baseline for the banker off glass, or turn inside and launch the lefty hook shot. The first shot was his primary weapon, and it was all it took for him to be dominant down low. That, plus an improved mid-range game, better fitness and stronger rebounding ability made him one heck of a potent force on the court down low.

His defense was also much more improved, as he was able to rotate on pick and rolls as well as hold his own down in the post. His ability to crash the boards in a way that allowed Harper Kamp to conserve his energy for the offensive end. When MSF was on, it was really hard to beat us--when his plus/minus rating was positive (i.e. we outscored our opponents when MSF was on the floor), Cal went 14-4.

So teams resorted to fouling him out by running into his body and demanding fouls. Pac-10 officials aren't known for being the best at their job, and are prone to calling fouls at the slightest bit of contact. 3.9 fouls a game is absurd, perhaps one of the highest foul rates in the country. And it wasn't like last year when Sanders-Frison was still a step too slow for conference play. Here it was a matter of officials not understanding that when a big man holds his ground and doesn't reach forward, it's not a foul. This happened way too many times this year.

He will be missed a lot, especially if Richard Solomon or Bak Bak struggle to put on the weight to bang down low.

LeonPowe:  More than his on court contributions - which were plentiful (his defensive rebounding really was a key to our season, and I think overlooked in terms of it's importance) but his leadership role seemed very apparent. Also, for a JC guy he seemed to integrate himself into the team very well and was obviously well liked and respected.

Kodiak:  Besides the improvement in his low post scoring and defense, I was impressed by his work without the ball in his hands.  You could see a big difference in how our guards/wings would struggle getting open when he wasn't in there to set screens.  It's no coincidence that one of our go-to plays was the high pick and curl to Jorge with MSF freeing him up.  Although he obviously had some...mass...to use judiciously, he wasn't just running guys over in the post.  For a big guy, he rarely got called for holding guys or while fighting for position.  He was surprisingly adept at using his feet instead of his hands to establish good position.  I also appreciate his willingness to pass the ball and how he could help facilitate the offense.

Avinash:  His passing out of double teams was exceptional. Once the help defender came over, he'd find the correct angle and hit his shooters (the passes weren't always on target, but he'd rarely turn the ball over passing out of the low post).

Last year when the double-team came, Sanders-Frison would try to fight through it and throw up a wild shot. This year he seems more assured with his vision and trusting in his pass-making.

Also, another part of his game that doesn't get a lot of dap is his ability to operate out of the high post and find the cutters. Remember that pass to Jorge last year against ASU that essentially clinched the Pac-10 title for us? He did that a bit with Harper Kamp this year, although it would've been nice to see him team up with a premier slasher.

TwistNHook:  Is that the one that they discuss on the video board at games?  I like those videos!

Where do you see the next phase of MSF's career taking him?

LeonPowe:  Yeah, unfortunately, I don't see him in the Association, but he can definitely make a living playing professional basketball somewhere, if that's what he wants to do.

NorCalNick:  Bearinsider did a video interview with Markhuri, and at about 15:15 into the video he says he doesn't know what the future holds.  But the good news is that he's set to graduate at the end of the semester, and realizes the value of the degree he's earned.  Considering how highly Monty and the team speak of his leadership, I'm sure he'll be successful in whatever field he chooses.

OhioBear:  I ,too, have a hard time projecting MSF into the NBA.  But I certainly wouldn't be surprised if he played overseas.

I will remember MSF as a guy who improved tremendously in his senior year from what he had been in his junior year.  MSF was not particularly impressive on the offensive end during his junior year.  But with the departure of Randle, Christopher, Boykin, and Robertson from the 2010 Pac-10 championship team, it was clear that someone needed to step up to be a scoring threat for the 2010-2011 Bears.  MSF didn't become Derrick Williams, but he did become a guy we could go to down low.  I love the lefty hook shot!

Unfortunately, I will also remember MSF for "body bias" in the Pac-10.  The refs, IMO, seemed unduly harsh on MSF throughout his career. .

As far as specific individual memories go, I'll always remember "mad face."  That image will be a staple on CGB!

Kodiak:  As a senior, MSF was smart, tough, unselfish, and effective on both ends.  Watching him as a junior, there's no way you could have predicted him to be such a rock in his final year.  I give him all the credit in the world both for losing a huge amount of weight, and then for battling through a season-long debilitating injury.  A lot of MSF's work was in the trenches off the ball and was easy to overlook or undervalue.  I think his best game was the overtime win against ucla.  He played future NBAer Josh Smith one on one and outplayed him, despite giving up 50+ pounds and a ton of height.  There's really no way that he should have been able to hold his own - but heart was the big equalizer.  In a microcosm, that was MSF's season.  With some JC transfers, you go the same way for a time and then depart.  MSF was a Bear.  Don't forget it.  Don't dispute it.  I thank him for his hard work and wish him nothing but the best.