Another big matchup today. Sean Dawkins, footballing wide receiver, versus Robert O. Briggs, legendary marching band director. Certainly a unique matchup, but that's what sets the CGB Hall Of Fame apart from other meaningless internet competitions: uniqueness! The winner here takes on The Mayor: Kevin Johnson! Could be a tough hill to climb.

You can view the whole bracket here. Voting ends this Friday at noon, so go vote! GO BEARS!

He played for three years, from 1990-1992. In that time, he had 129 receptions for 2124 yards. Great, you say, good Top-10 stats, but not the best. But the thing with Dawk was, it seemed like every freaking time we needed a spectacular play, there he was. He was the master of the huge play. Dawkins was Money.

He is the Cal career (with 31) and single-season (with 14) leader in receiving touchdowns. Over his career, his touchdowns came on plays which averaged 16.5 yds, 1.5 yds more than the next best guy (Bobby Shaw, who is also a worthy candidate).

Dawkins was The Man in the years that Cal Bear football emerged from the darkness. His 1990 team won the Copper Bowl for the first bowl win since 1938. The following year was the legendary Citrus Bowl season when Cal finished the year ranked #7. He was a consensus All-American in 1992, his junior year, and declared for the draft a year early, where he was drafted in the first round by the Colts.

best hands on any Cal wide out I’ve ever seen. GMac and Desean are close, but Dawk just had velcro mitts

Sean Dawkins is the best wide receiver in school history (which is saying something at Cal).

He's the best because he had the best combination of size, hands and speed - Dawkins stood 6'4" and was just fast enough to create separation from make corners and safeties pay after hauling in a pass.

He's the best because all he did was score touchdowns - 31 over his career, ranking him first among all Golden Bears pass catchers. Dawkins caught "only" 129 passes over his Cal career, but almost 1/4 went for scores. The fade to #86 in the corner of the end zone was a thing of beauty, and few Pac-10 corners had the size or strength to deny him the football in the red zone.

He's the best because he was a consensus All-American and scored 14 TDs in 1992, despite facing constant double teams on a bad 4-7 team.

He's the best because he always got up for Stanford, even if his teammates didn't. Twice he was named Cal's player of the game in the Big Game. He also got up for SC - his three touchdowns drove a stake in the heart of the Trojans in Cal's record 52-30 rout in 1991.

After being drafted in the 1st round, 16th overall, Sean Dawkins went on to have a nine year NFL career. 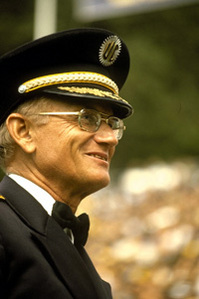