Share All sharing options for: Predicting the 2011 Cal Football Season: Results and Simulations!

Now that spring practice is over, we have a better sense of what our Cal Bears will look like when they hit the field on September 3rd against Fresno State. During the spring some questions were answered (Maynard!) while others still remain (O-line?). Now that we have a better understanding of our team, this seemed like a fine time for some good old-fashioned speculation. And speculate we did.

Many thanks to the 500+ of you who submitted entries in our spring edition of "Predicting the 2011 Season." This is a critical season for the Bears and many of us appear to have some hope that things will improve after last year's debacle. On average, we anticipate about 7 wins. It looks like we will notch 4 or 5 home wins and 3 road wins.

Take a moment to look over the win probabilities on the right, as we'll go into much greater depth after the jump. In addition to handing out our usual array of awards to those who participated, we go one step further with this year's predictions: we use the results to simulate the season one million times and see how likely it is that Cal will finish anywhere from 0-12 to 12-0 (thankfully the latter is about 400 times more likely than the former).

Breaking Down the Win Likelihoods:

It's not surprising that we all have certainty that the Bears will defeat the lowly Blue Hose of Presbyterian. While we usually have pronounced variation in the outcomes of games that look like losses, we all seem pretty confident that the Ducks are going to deliver a healthy dose of revenge after last year's near-upset.

The main reason Stanford has so little certainty is because many of us cannot fathom giving us anything but a 100% chance of reclaiming the axe this year. We're also not too sure what will happen the day after Thanksgiving when we visit the team we annihilated 50-17 last year...the same ASU team many expect to win the Pac-12 South.

If numbers and tables aren't your thing, take a look at the plots below. On the x-axis we have Cal's chances of winning and on the y-axis we have the percentage of you who voted for that outcome. One of games stands out pretty clearly: Presbyterian. We had about 68% of submissions giving Cal a 100% chance of winning, which is why we have that huge spike. Elsewhere Washington State looks like the next-easiest game, followed by Fresno State, and then a near-tie between Utah and Oregon State. In what is clearly our toughest home game of the year is USC, where most of you predict we have between a 20% and 50% chance of winning. (BTW, the plots are particularly "lumpy" because people were much more likely to choose numbers divisible by 10). 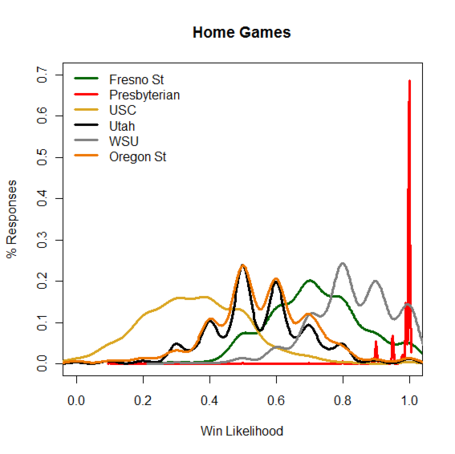 There's no Presbyterian-esque spike in our away games, but we are most confident in a victory over Colorado (MARSHALLLLLLLLLL!). Next-easiest is UCLA followed by Washington, ASU, Stanford, and then the Mighty Ducks of Oregon. Kudos to those of you who contributed to that little bump at the 100% mark for Stanford. 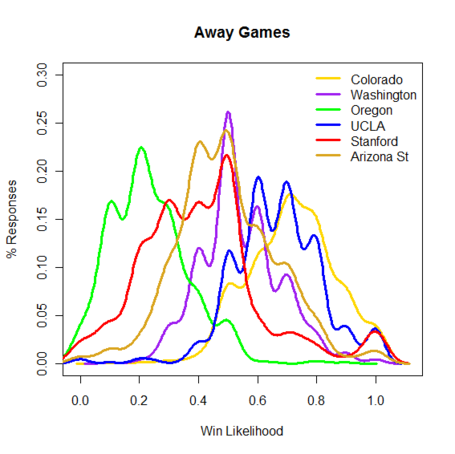 Based on all the submissions, I thought it would be interesting to simulate the season to see how likely it is that Cal goes 7-5, 8-4, and so on. The following is after simulating the season a whopping one million times.

It looks like a 7-5 season is most likely, though 8-4 and 6-6 follow closely behind. A 9-3 season is not too farfetched, but neither is another 5-7 season. For the oldest and bluest of our readers, get ready to prepare for the worst as we have a 1 in 500,000 chance of going winless next season. The sunshine pumpers among us can celebrate that we have a 1 in 1,300 chance of going undefeated. Rose Bowl or bust!

Now comes time for the fun part, let's hand out some awards! First we have awards for those whose sunshine pumps at levels unknown to mankind (or the rest of CGB, at least). I do not necessarily agree with you guys, but I'd love to see a 9, 10, or 11-win season!

The Old Blues are next. They had the lowest of the lowest predictions. Oski, what happened?! 3.5 wins? Hopefully you all are setting yourselves up to be pleasantly surprised this season. royrules? You're a little early to move onto the Old Blue stage of your life!

Next up we have those whose predictions were most similar to CGB at large. Thanks atoms for proving we mods aren't totally out of touch with reality.

Next up we have a pair of editor's choice awards.

The Seared Cornea Award goes to those who have pumped so much sunshine that you have become blind to reality. That's right, you three gave Cal a 100% chance of winning every single game. Keep on pumping that sunshine! (If you're wondering why they didn't also earn the Sunshine Pumper awards, it's because I remove submissions with all 1s or 0s before I crunch the numbers.

This award goes to Katster and PlayClassyBears whose respective submissions had six and four digits beyond the decimal place. How exactly you determine that we have a 0.628433 probability of defeating Fresno St is a mystery to me.

How did CGB's fearless leaders vote?

Finally you have the submissions from your beloved mods, who generally had lower-than-average predictions (except for atoms, of course). Confirming his status as a closet Stanford fan is Twist, who had the lowest predicted chance that we win the Big Game.

Thanks for your submissions, everyone! We'll see you again in late August for the Fall edition of "Predicting the 2011 Season"!