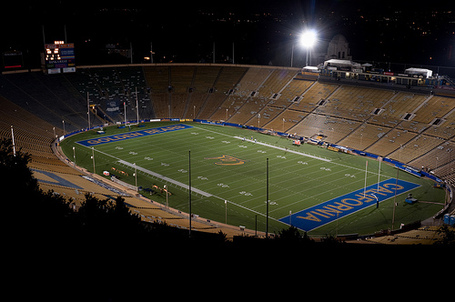 Yesterday, we talked about the ramifications of Thursday and Friday night football. Today we take a look at how some Saturday nights could extend well into the dark.

As a concession to get more games on ESPN national telecasts last fall, the Pac-10 experimented with late starts on ESPN that kicked off around 8 PM PT (sometimes as late as 8:15) and didn't wrap up until somewhere close to 11:30-11:45 PM PT. They did this mostly for Furd football games, because (a) no one shows up to half the games, and (b) the remainder of them flee the premises at halftime after an hour of listening to their stupid band.

However, with the new Pac-12 TV contract promising more national games, it's likely we'll soon be spreading the wealth throughout the conference. We've had our occasional 7:15 PM starting kickoff, but who's ready to be the back-end of an SEC thrillhouse matchup and get this rumble started deep into Saturday night?

Are you a fan of late Saturday night football? Let us know why in the comments.

There are obviously some huge advantages to late night games. The student section should be rabid. After hours of kegging, tailgating, partying and enjoying California weather to the fullest, they should be on their best behavior come kickoff. And by best, I also mean worst. There will be frat boys thrown out, incessant heckling and general debauchery that typifies most . But most importantly, it should provide a raucous home environment, something Memorial Stadium has struggled to supply on a consistent basis. The football team should love that.

Additionally, no opponent likes playing a late night road game. It means a whole day stuck going over gamefilm, a whole week trying to acclimate toward the late start time, and a late trip back home. It's the worst possible world for the team that gets this game, and could mean more advantages for a home team with a fired up crowd. (Note: This will obviously work against us when we get the other end of the stick and have to travel to Corvallis or Pullman and play under the stars.)

Of course, the disadvantages probably mean less alumni might be willing to shell out season tickets if it means missing a game or two. We probably won't see a downturn in ticket sales, but a rough start to a season could cause apathetic fan turnout to games with disadvantageous start times. I'm no fan of noon kickoffs, but it's really pressing for our Older Blues to attend games the later it gets at night.

We also have to consider weather. Sometimes it'll be perfect. Other times it can get brutally cold in Memorial as the Pacific winds circulate through Strawberry Canyon. Other times it can get cold and wet. We already have enough of an issue getting fans to attend home games in inclement conditions, I can only imagine how much worse it'll get under the lights.

Finally, there's getting home. I don't know about you, but the later it gets in Berkeley, the harder it is to maneuver around. BART and AC Transit should be in service, but I imagine getting home around midnight/1 am is a little bit less ideal for older folks and families than 9-10 pm. Also getting people from Sacramento to attend these games becomes a real problem.

Whatever. I'm nitpicking. Minor gripes aside, the big issues are (a) TV revenue earned from games like these, and (b) how that offsets ticket sales. If these two factors cancel each other out, we shouldn't have much of a problem.

Let me know if I missed anything. I probably did!