We're so lucky to have such an amazing rugby team here at Cal.  Literally dozens of national championships and a level of play that is unrivaled.  I know I love to go see rugby games, but I'll be the first to admit that I often have no idea what the heck is going on.  I know we are winning 152-0, but sometimes I don't really understand why.  I don't think I am alone in this.

So, here at CGB, we've decided to start helping people better understand our criminally undervalued rugby program.  We've contacted tons and tons of great rugby players so they could tell us their story.  Not only will they help us better understand the high caliber of student athlete that plays rugby at Cal, but they will also help us explain some of the rules of the game.  We've already talked with Marc Tausend.

Today, we are talking to Scott Anderson, who just happens to be the son of the rugby coach preceding current Coach Jack Clark, Ned Anderson.  He plays the position "lock" and will answer some questions for us about that position.  Hopefully, next time you go to a game, you'll have a better appreciation of what the "lock" does.  And you'll enjoy the game that much more!  Here is some more information on Scott Anderson straight from the horses mouth:

As for an intro, I think you'll find that most of us aren't going to be great at that. Self-deprecation is a much more likely character trait than self-promotion in the Cal Rugby world. But, I'll just say that I played lock at Cal from 1999-2003, and during that time had the chance to play with my brother (David Anderson, flyhalf) and for my father (Ned Anderson, Head Coach 75-85, Assistant Coach 2002-2008). Also proud to say that my sister played on the Cal Womens Water Polo Team, after I graduated. There are 4 Varsity Letter Winners in my immediate family. Needless to say, our blood runs Blue & Gold.

Blue and Gold!  After the jump, Scott Anderson's answers to our questions.  A hearty thank you to Mr. Anderson for taking time out of his busy coaching schedule to answer these questions.  GO BEARS!

That's an easy one for me. My dad (Ned Anderson) was the coach of the team from 1975 - 1985, and I was born in 1980 (the year Cal won their first championship in Davenport, Iowa). Needless to say, I've been interested in rugby since before I can remember.

2.  What got you interested in playing rugby at Cal?

Even easier. I never even really considered going anywhere but Cal. I had smaller school offers for football, but didn't entertain them seriously. I tried my hand at walking on to the football team freshman year, always knowing that I'd end up being a full-time rugby player.

When I was in high school, it was still pretty informal. I was a basketball player in high school, which ran into rugby season, so I only ended up playing one year of high school rugby. However, as a junior in high school, I attended the first-ever Cal Rugby Camp, coached by guys who ended up being my freshman teammates (Kirk Khasigian comes to mind primarily). As a high school coach now (I coach the Lamorinda High School Rugby Club along with no fewer than 5 other Cal Rugby grads), I can definitely say the best way to find your way onto the Cal rugby team is to attend that camp. I believe they even now have a youth division, so it's never to early to throw your name in the hat.

4.  Did you play on the frosh-sophs team?

Absolutely. Everyone did. Unlike other major college sports, in rugby you have the opportunity to cut your teeth this way.

5.  What was the experience like playing on the frosh-sophs team?

Fun, there's no other way to describe it. 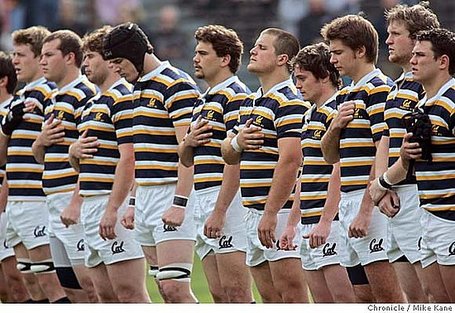 6.  What activities outside of official rugby practice did you partake in to stay in shape?

One year we somehow found ourselves in an intramural basketball league (along with Eric Andersen, Andrew Blair, Jake Stanfill, Andrew Lindsey, and others). That didn't last very long, as we were a little too aggressive having spent too much time on the rugby field. We had to quit when one of the guys (who shall remain nameless) sprained a knee. Needless to say, that would have been a tough one to describe to the rugby coaches.

7. What do you love most about your experience on the team w/ Coach Clark?
To this day, there are anecdotes and quotes from Coach Clark that still bring smiles to our faces. There's really nothing like waking up on the morning of a national championship and knowing you're fully prepared....wait, that might be one of those anecdotes right there!

8. What was the toughest game during your career and why?
BYU, my junior year in 2001, without a doubt. There was always talk that we never played them because of their inability to play the Saturday/Sunday format in the national championships. Obviously, as a player, we wanted to play the best all the time. And we got our chance that year. We were behind much of that game but pulled it out in the end. BYU was really really good that year too. But we were undefeated.
9. Any good stories on how you and your teammates would go about intimidating the opposition and dominate?
No intimidation neccesary, although the 20+ national championship banners on the fence at Witter Field didn't hurt. We only cared about what we could control, and that was our team.


10.  What was your favorite moment as a rugger for Cal?
4 of them. When the clock read 80 minutes in the national championship game, we knew it was time to celebrate, not to mention relax for a few weeks.

11. How has the experience of playing rugby transformed your career after graduating from Cal?

Well, I work in the sports marketing business and have had a variety of clients over the years, so that's an obvious correlation. Beyond that, at least for the first few years out of school, work life seems to move a bit slower than life on the Cal Rugby Team. Nothing could be more challenging than those 5 years in the program, and you can only realize that after you're done and enter the workforce. Of course, I don't have kids yet, so I'll probably change my mind on that bit relatively soon. 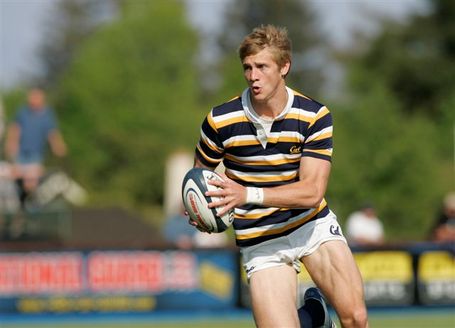 
12.  How many national championships did you win?  Really, just 4?  Well, that's embarrassing!

13.  What is your view on the situation surrounding the recent budget cuts at Cal that briefly imperiled rugby's status as a varsity sport?  Do you believe there was a difference between "varsity" and "varsity club"?  What do you think about how that process was handled by the administration?

I'm sure everyone has their varying, and passionate, opinion on the subject. I've just been extremely proud to be a Golden Bear through this time. I'm still young, but never before have I seen the university, particularly with respect to athletics, band together the way we have over this issue. Sure, it's a tough spot to be in, but my connections to Cal as a community have only deepened because of it.

Rugby is far and away safer than football. It's not really even a comparison. I'll let Paga and the football boys answer this with more detail.

15.  What is your view on Rugby Sevens?  Legit form of rugby or bastardization of the game?

Hey, it's in the Olympics, sounds pretty legit to me! As a lock who's supposed to be big and powerful, sevens wasn't really my game unfortunately.

16.  You coached for a high school level team after your time at Cal.  What was that experience like?

Still coaching, and waiting for practice to start as we speak. I can't believe it, but it's been nearly 8 years now. My biggest observation is simply that the game has grown so much in popularity, that I'm coaching kids who played the game as 5th graders (sometimes even younger). That blows my mind. As much as I'd like to tell our high school kids that I played on a great high school team, that's probably not true. Great athletes maybe, but these kids would probably run circles around my high school team.

17.  What did you learn at Cal that helped you be a better rugby coach?

Again, I'm the son of a coach, so I've never really reflected much on that. I've always sort of approached the game from a coaches perspective, but at Cal, details matter. In rugby, details matter. High school kids aren't great at details, but if you can get them to be better, then you've got something.

A ruck is what happens when a ball carrier gets tackled to the ground and needs the help of his teammates to retain possession of the ball. By definition, it's a player from the attacking and opposition team engaged with each other over the ball on the ground. As a lock, your job is to find your way to as many of those situations as possible, while ensuring you get the most done while you're there. How's that for ambiguity?

2.  What tactics do you use to accomplish your goal in a ruck?

Use any body part necessary other than the cleats on your shoes to expose the ball to your own side.

Same thing as in a ruck, but the ball carrier has not been tackled yet. In a maul, you're trying to win the ball WHILE moving it towards the opposition goal line. Maul's are a bit of a relic in the modern game, but still have their use.

4.  What tactics do you use to accomplish your goal in a maul?

Same as in a ruck

5.  You appear to be connected in a scrum to the hip level of the first line of players in the scrum (prop/hooker)?  What is your role there?

Push, and don't stop pushing until you've won the ball

6.  What tactics do you use to accomplish your goals in the scrum?

Same as in a ruck and a maul

7.  Do you have any special practices that you do to help you as a lock?

Locks are typcially the guys with odd-looking tape on their legs. that helps the props lift them into the air at a lineout.

8.  What originally got you interested in being a lock?

I am tall and not particularly fast, so i didn't have much choice.

9.  Are there any other positions you like to play?
I'd love for somebody to let me play flyhalf, but that's never going to happen. we'll leave that to Matt Sherman, who's a natural at it.

10.  Is there anything about your body that makes you a natural fit for a lock?

A lock is traditionally the main jumper in the lineout, although they are also utilized to lift as well. one of the greatest feelings (as a guy with a pretty pathetic vertical leap) is being hoisted in the air by 6'4'' Kort Schubert from behind, and 290 pound Mike MacDonald from the front. That makes you feel pretty athletic.

12.  What tactics do you use to accomplish your goals during a line out?

As mentioned above, the help of others.

Thank you very much to Scott Anderson.  Go out and enjoy some rugby.  GO BEARS!